There is a foreboding feeling...

Categorized as a "prequel," The Phantom Menace introduces us to the characters and a plot that are featured in the first Star Wars franchise. In this episode, a youthful Obi-Wan Kenobi (Ewan McGregor) meets the boy Anakin Skywalker (Jake Lloyd) and unwittingly starts him on the path to becoming the tyrant Darth Vader.

Violence C+
Sexual Content A-
Profanity A
Substance Use A

What did the Y2K bug and The Phantom Menace have in common? The anticipation generated more excitement than their actual arrival enjoyed. Despite this, I’m sure the release of ‘Menace’ will cause many parents to be bugged by children pleading again for the associated licensed merchandise.

Categorized as a prequel, meaning it begins prior to the proceeding three films, this first edition introduces us to characters and a plot that will tangle and weave through two more movies until it becomes a perfect fit to the initial release back in the disco 70’s. The fact that George Lucas has kept the look of this film so similar to those earlier productions is a feat in itself.

Meeting the youthful Obi-Wan Kenobi (Ewan McGregor) and Anakin Skywalker (Jake Lloyd—whose character, of course, will become the tyrant Darth Vader), is almost as fun as going back in time to discover your spouse in grade school.

Skywalker and Kenobi, along with master Jedi trainer Qui-Gon Jinn (Liam Neeson) and a completely digitized character named Jar Jar Binks (voiced by Ahmed Best) become the team to root for. They attempt to save Queen Amidala (Natalie Portman) from a bad hair day, and her planet from being overrun by the Trade Federation.

Conflict is the core of any movie with the word war in its title, and The Phantom Menace is chock full of space-aged digital violence—but no gore. Thousands of those killed are robotic droids or of a non-human descent (that makes it okay?). With the exception of a high-speed pod-race, which is organized for recreational/gambling purposes and results in needless loss of life, the rest of the action depicts individuals fighting for freedom after other attempts at negotiating have failed.

The lack of profanity and sex (other than a brief shot of a woman in just as brief a bikini) impressed me more than the effects, which is bound to make this film a huge hit with many families. The good news is, if the old Star Wars movies met your family’s standards, this will too.

Is it more acceptable to kill non-humans (robots, aliens, etc.) than human beings?

This movie has been criticized for its simple, almost innocent story line. Yet it is very much like its predecessors. Is this a reflection on the evolution of the movie industry over the last 20 years?

Re-releasing blockbusters in 3D to the big screen is big business in Hollywood. Learn more about the this film’s digital conversion here: http://www.primefocusworld.com/news/2011/03/lucasfilm-works-prime-focus-convert-star-wars-episode-i-phantom-menace-3d.

The most recent home video release of Star Wars: Episode I - The Phantom Menace movie is March 30, 2000. Here are some details…

- Blu-ray Only Bonus Features: Audio Commentary for Each Movie from Archival Interviews with George Lucas, Cast and Crew.

Note: Star Wars: Episodes IV - VI are also being released on the same date as a separate package.

With the entertainment world embracing the powerful DVD format over the past few years, there’s been a noticeable void in the thousands of DVD titles: Star Wars. With multiple releases of all four Star Wars episodes on VHS, it took until October 16, 2001, before the fabled space legend would find its way to the futuristic silver disc.

Following so much anticipation (shortly after the VHS release over a year ago, fans began petitions calling on George Lucas to deliver the disc), the market almost demands this to be one of the highest quality DVD releases to date… and it is.

A two-disc collection selling for a very reasonable $24, this DVD release is stuffed tighter than Queen Amidala’s hairdo.

Disc One contains completely animated chapter menus along with a commentary by Lucas and others that you can listen to while viewing the movie… the latter of which is also included. And compared to VHS quality, this DVD print is like seeing Episode 1 all over again. Finally, there are links to the Star Wars official web site, along with links especially for “DVD Owners.” (Unfortunately, we were unable to connect to the latter selection—perhaps due to our office’s computer firewall).

On Disc Two, fans will discover one of most informative “making of” documentaries put to DVD. Unlike so many others, which come across as cheap marketing hoopla, this is a true documentary that even forgoes the voiceover announcer. With honest remarks from creators beginning months before initial shooting begins, and working through the film’s four year production, this title could be worth the cost of the disc alone.

Other offerings on Disc Two include an interesting music video that is cut to a piece from the film’s dramatic score, a thorough explanation of “animatics” (the ability to rough out special effects in 3D animation) and how they assist the creative process—again samples are included from various parts of the film allowing you to see the application, a beautiful production photo gallery, theatrical posters of the movie from around the world, TV spots, and various promotional trailers. Only a short clip about Star Wars Starfighter—LucasArts’ Playstation 2 video game offering—comes across as more advertisement than information.

Toss in a half dozen more documentary featurettes dealing with everything from costumes to fight scenes, along with other short clips originally published on the Star Wars web site during the making of Episode 1, and you’ll find yourself sitting in your viewing pod for over six hours—and that’s if you don’t watch the movie.

And a spin-off tale: Rogue One: A Star Wars Story

Related news about Star Wars: Episode I - The Phantom Menace 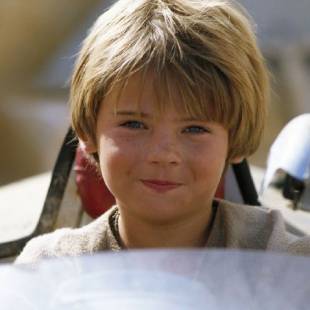 The Force… It’s calling to you…