Kids will be entertained, but, surprisingly, adults will probably have the most fun in this film.

The kid's toy LEGO assembles itself into an animated movie, featuring an ordinary LEGO man (voice of Chris Pratt) who is mistaken for an extraordinary action figure by a group of super heroes. These "Master Builders" are hoping he will help them dismantle an evil villain's diabolical plans.

Violence B-
Sexual Content B+
Profanity A-
Substance Use A

The Lego Movie uses building blocks to pose an interesting dilemma: When do you follow the instructions and when do you disregard them?

When builders first started snapping the colorful blocks together in the 1950s, there weren’t a lot of instructions—or a lot of options when it came to the pieces. Things have changed dramatically in the last 60 years. Now Lego blocks come in kits with specific instructions for constructing the item shown on the outside of the box. For those who like order in their lives, this marketing approach is perfect. Unfortunately, those who want to use their own imaginations may find the instructions to be a little stifling.

In The Lego Movie, Emmett Brickowoski (voice of Chris Pratt) is one of those construction minifigures who follows the instruction booklet religiously. As a result of their coordinated efforts, he and the other construction characters are able to assemble impressive structures for their leader President Business (voice by Will Ferrell).

However, everything is not well in the Lego universe. And one day after Emmett mistakenly falls down a hole in the ground, he discovers an entire group of Master Builders. Among them are ninja fighter WyldStyle (voice of Elizabeth Banks), Batman (voice of Will Arnett), Superman (Channing Tatum) Unikitty (voice of Alison Brie), Gandalf (voice of Todd Hansen) and their leader Vitruvius (voice of Morgan Freeman). Vitruvius tells Emmett he is the chosen one—the Special Master Builder who will save everyone from the diabolical deeds of President Business and his Bad Cop (voice of Liam Nesom). But being called “special” is a pretty heady experience for this average guy.

We’ve seen plenty of toy-inspired movies lately like Transformers and G.I. Joe, although most of these franchises are aimed at an older crowd. So parents will be pleased to know The Lego Movie will likely be suitable for the slightly younger 8-and-up crowd. They won’t get all of the jokes, yet there are enough explosions, action and peril to keep the majority of kids entertained.

Surprisingly, it is adults who will probably have the most fun in this film, especially if they’ve played with Lego. It’s apparent someone behind this script knows his or her way around the toy. The items in the Hall of Relics are the kind of objects that mysteriously show up in the bottom of every Lego storage box: discarded bandages, misplaced game pieces, even a 9-volt battery. And the parade of Lego characters in this story includes a whole new set of figures, along with resurrecting some old ones.

With a creative marketing team behind the release, Warner Bros. and The Lego Group are set to further promote the movie by releasing 17 building sets based on scenes from the movie. They are also launching 16 new collectable minifigures including Shakespeare, Abraham Lincoln, Taco Tuesday Guy and Scribble-Face Bad Cop.

Because they are made of plastic and plastic doesn’t bleed, there’s no gore in this film. Still, there are explosions, simulated fire, bullets and some moments of peril for the little figures. At least one character also dies.

Luckily the real message of this story is about embracing your own creativity. While following the instructions has its place, Emmett discovers the real joy of building when he finally tosses the booklet aside.

Violence: A character steals items. While the movie contains action violence, no blood is depicted. A man is kicked off of a cliff. Simulated explosions and gunfire are shown. One character is impaled on a Lego spear. In a torture scene, a character threatens to melt another character. Ninja-style fighting and other cartoon violence is shown. Cowboys engage in a bar fight. A character is beheaded with a coin. A man dies and others are tied up. A character uses a sharp blade to remove an object from another person’s body.

Sexual Content: A character comments about scratching his backside. Characters make photocopies of their buttocks. A couple falls in love.

Why does Emmett want to believe he is special even though he is a very average guy? Why does Lord Business say that you don’t get a trophy for just showing up? How do he and other characters define someone who is not ordinary? What is your definition of special?

How are television and music portrayed in this movie? Why are they so “vanilla”? How can pop culture become so concerned with appealing to the masses that it loses all its imagination?

The most recent home video release of The Lego Movie movie is June 17, 2014. Here are some details…

The Lego Movie releases to home video in three packages:

- “Everything is Awesome” Sing-Along

- Stories from the Story Team

Related news about The Lego Movie

Hilarious Bloopers and Behind-The-Scenes from The LEGO Movie 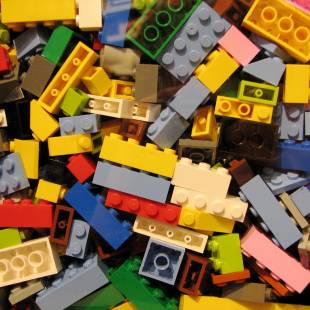 Thieves Making a Haul on Lego

Lego Dominates at the Box Office—Again