The dialogue-heavy script and lack of action or real story advancement makes the plot drag. But it has some powerful messages about the use/misuse of propaganda and political posturing.

Katniss (Jennifer Lawrence) is compelled to be the new face of the rebellion only to discover the capitol has created their own publicity campaign in this war of words and bullets.

Katniss Everdeen (Jennifer Lawrence) has lost her identity as a spitfire.

It’s understandable—considering what she has been through. After volunteering to take her younger sister’s (Willow Shields) place in The Hunger Games, she had to kill other children or be killed herself. Winning that grisly, annual competition, she was supposed to live out the rest of her years in pampered luxury. But her fiery temper got her in trouble with Panem’s President Snow (Donald Sutherland).

In retaliation for her defiance, Snow called her and the other past victors of the game back into the arena for a Quarter Quell. After surviving that by openly violating Snow’s rules, Katniss has been reduced to a shell of her former self, besieged by horrendous nightmares that leave her cowering in the dark.

Like the books this film is based on, this franchise has always been rife with violence, from the depiction of kids ruthlessly bludgeoning other kids, to past victors forcibly murdering past victors. For many parents the brutality has been the biggest problem with this dystopian teen tale. And this third movie is even more eerily in step with current news reports of world events. Videos of hooded characters being shot in the head in front of their Districts are broadcast on huge screens throughout the country. Masked soldiers cold-heartedly gun down unarmed citizens and bomb a hospital filled with wounded men, women and children. Charred and bloody bodies clog the streets. I know these portrayals are meant to show the Capitol’s total disregard for the citizens, but the carnage seems excessively graphic and disturbing in a movie aimed predominantly at adolescents and young adults.

Then there is the problem of the grownups. Yes, this is yet another movie where the older generation manipulate the younger one for their own purposes. Katniss has sparked the embers of a revolution. Eager to fan the flames into a full rebellion, President Alma Coin (Julianne Moore) from District 13 wants Katniss to become the face of the uprising. In the past, Katniss may have been equal to the task. But now she seems unable to conjure any emotion, at least until they take her back to District 12 to see her hometown lying in rubble. The shocking scene rouses a response from Katniss that the propaganda team quickly captures on film. Still her fervor seems short-lived, if only because she is too emotionally exhausted to maintain her anger. This is a girl crying for help. Yet rather than being nurtured by compassionate adults, this teen becomes a mere pawn in the hands of those who want to further their own cause.

The dialogue-heavy script, with a lack of action or real story advancement, makes the plot drag as well. However for parents who want to watch and then discuss the storyline with their children, The Hunger Games: Mockingjay Part 1 has some powerful messages about the use (or misuse) of propaganda and political posturing. There are also questions about who to trust and the justness of pushing Katniss to be the flag bearer.

Knowing how the novel (and presumably the film series) will end means Katniss needs to find herself before Part 2 begins. Right now she seems unable or unwilling to make her own decisions. If she is to become a force for good, Katniss will have to reignite the passion that made this hero a thorn in the side of the rose-wearing Snow.

Violence: Characters awake screaming from their nightmares. Images of a destroyed town include smoldering ruins, along with hundreds of charred and bloody bodies lying in the streets. A character steps on a skull. Characters wearing black hoods are forced to kneel before being executed (shot in the head) in front of the other townspeople. Corpses wrapped in blankets are piled in a building. Numerous bloody and injured patients are shown inside a hospital, which is later intentionally bombed killing everyone inside. Planes are shot down. Large, fiery explosions are shown. Masked soldiers shoot at a group of men and women (many of the soldiers are later killed in an explosion). Characters are shot at while trying to set off an explosion that destroys a dam—many people are presumably washed away in floodwaters. Citizens are forced into underground bunkers while their town is repeatedly bombed during an air raid. Characters use gas bombs to subdue their enemy. Dead bodies are frequently shown strewn on the ground. Torture methods are discussed and a character is shown with signs of enduring physical abuse. A character attacks another by pushing, hitting and choking, until he is hit over the head with a large object.

Sexual Content: A few moments of embracing and kissing are shown.

Alcohol / Drug Use:A character is subjected to a torture regime that includes the use of drugs to cause fear. Gas bombs are used to immobilize an enemy. A recovering alcoholic man asks for “medicine” to help him deal with his cravings and complains about the implementation of prohibition.

Both the Capitol and District 13 employ propaganda to further their cause. How are these campaigns used to engender sympathy and support for each side? How do people in the Districts react? How difficult is it to distinguish fact from fiction in these “ads”?

Because of her actions during the Hunger Games, Katniss has sparked hope and a rebellion in the Districts. Is it fair to force one so young to become the face of the revolution? What pressures is she subjected to? Why do those behind the revolt seem so clueless to her emotional needs? Why does Snow choose to kill or harm those around her, rather than attack and kill Katniss herself?

How are political speeches used to rile up the people in this movie? Who is most effective in their use of this medium?

Why does this script say that fear is the most difficult emotion to overcome? How have the forces in the Capitol used torture to inflict that emotion in Peeta? What is his reaction to the object of his fear? What can people do to overcome the things that frighten them?

The most recent home video release of The Hunger Games: Mockingjay Part 1 movie is March 6, 2015. Here are some details… 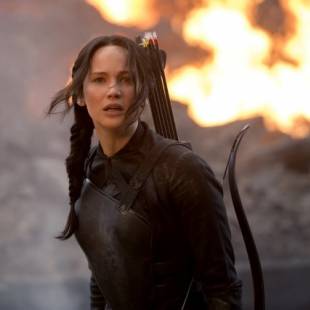 The Hunger Games: Mockingjay Part 1 Is Set to Release This Friday