Feeling longer than it needs to be, there's a sense that this whole cinematic series was created more for fans who have read the trio of books than for casual moviegoers.

In part 2 of the final chapter of The Hunger Games, Katniss Everdeen (Jennifer Lawrence) and District 13 revolt against the cruelty of the Capitol.

At long last The Hunger Games reaches its protracted close. Surprisingly, in spite of its superficial appeal as yet another story featuring a strong-willed female caught in a lovers’ triangle, it manages to hit home a timely message that rises above expectations.

First, know that viewing this final chapter is a waste of time and money if you haven’t done your homework. The film opens precisely where Mockingjay - Part 1 left off. Katniss (Jennifer Lawrence) is recovering from an unexpected attack from her good friend, and one of her love interests, Peeta (Josh Hutcherson). The fight between the rebels and The Capitol is firing on all cylinders, both on the battlefield and, even more so on the media. President Alma Coin (Julianne Moore), head of the rebellion, has made Katniss the unwitting face of the opposition. In return, President Snow, the crusty dictator of The Capitol, does his own PR work to make up for losing his puppet—the drugged and tortured Peeta. The two leaders literally face off on TV screens throughout the beleaguered nation while both sides are preparing for the inevitable war.

Eventually Katniss, her other man Gale (Liam Hemsworth), Peeta, who is still recovering from the mind controlling substance and psychological abuse inflicted during his captivity, along with their friends Finnick (Sam Clafin) and Cressida (Natalie Dormer), join with the hardened solider Boggs (Mahershala Ali) to attack Panem, where the seat of government is located. With Katniss determined to find Snow and put one of her trademarked arrows into his heart, the group begins to make its way through the impossibly booby-trapped city. Around each corner are dangerous “pods” that inflict bullets, waterfalls of oil and deadly napalm explosions that work to slow the team’s advance. Watching their progress back in the bunker at District 13, we have a feeling that President Coin and her right-hand-man Plutarch (and the final time you’ll see the late Philip Seymour Hoffman) may not have our heroine’s best interests in mind.

Following the pattern of the previous movies, violent confrontations are the greatest concern when considering the appropriateness of this franchise for teen viewers. Characters are poisoned, shot with bullets and arrows (one is seen with an arrow extending from the body), drowned in oil, hung from chains and covered in flames. Fortunately, there is no time for sex and the script is devoid of profanity.

Feeling longer than it needs to be, there’s a sense that this whole cinematic series was created more for fans who have read the trio of books than for casual moviegoers like myself. That being said, there is still reasonable entertainment value here and you’ll certainly want to see this concluding episode if you’ve already invested in the storyline. Parents many also appreciate that, unlike some action flicks, the violent portrayals here are intended to reveal the difficulties of understanding underlying political motivations in society. Coincidentally opening as the attacks on Paris are unfolding on the TV screens of reality, the dilemmas depicted in The Hunger Games seem all the more more poignant and timely. However, just as we have suggested with previous installments of this franchise, without some discussion of characters’ intentions, selfishness and prideful behavior, this will only be yet another love story of a strong-willed female protagonist who also happens to be a lethal killer.

Violence: Frequent portrayals of violent conflicts throughout, most of which are non-graphic, with only a little blood, bruises and injuries shown. Characters are shot with bullets and arrows—one is seen with an arrow extending from the chest. A character fights to break free of restraints. A character is poisoned, causing blood to seep from the nose and eventual death. Characters are drowned in an oil-like liquid and one is later seen hanging from chains. Deaths are implied after an explosion. A character is engulfed in flames and is later seen with burn injuries. Bombs explode over a crowd of women and children, some injured and the dead are briefly seen. Grotesque human-like creatures attack characters. Assassinations are planned. Characters are in frequent peril. Torture is discussed.

Alcohol / Drug Use: An unidentified poison is included in an alcoholic drink, causing a character to bleed from the nose prior to death. Social drinking is seen. Morphine addiction is implied.

What motivations are influencing the political leaders in this story? Do they have different reasons for engaging in war? How are President Coin and President Snow different in their desires? How are they similar? In reality, how can we determine what is motivating our political leaders? Have you ever been personally motivated by an ideal that you didn’t openly reveal?

Did you miss hearing swear words in this film? Does strong language “improve” some scripts? Do you feel it is overused? Are you surprised at the lack of profanity in this action thriller?

This movie is based on the The Hunger Games trilogy by Suzanne Collins.

The most recent home video release of The Hunger Games: Mockingjay Part 2 movie is March 22, 2016. Here are some details… 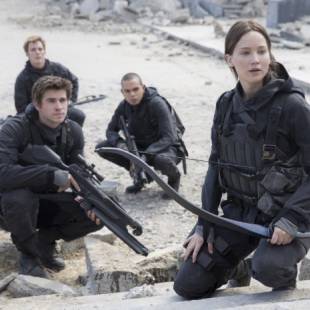 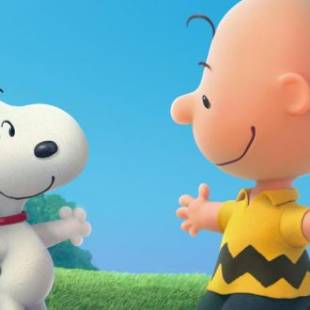