You either have to be gusty or foolhardy to take on the retelling of a story as celebrated as "Cinderella". Thankfully the director and screenwriter prove they are more than capable.

Disney takes on the Cinderella story once again, this time with Lily James playing the ash-covered maiden. Helena Bonham Carter stars as her Fairy Godmother, Cate Blanchett as the wicked step mother and Richard Madden as the handsome prince.

Violence B-
Sexual Content A-
Profanity A-
Substance Use B+

You either have to be gusty or foolhardy to take on the retelling of a story as celebrated as Cinderella. Thankfully director Kenneth Branagh and screenwriter Chris Weitz prove they are more than capable of the task in Disney’s live action adaptation of the famous fairytale.

As an actress, Lily James boasts a relatively scant resume to take on the iconic role of the little orphaned girl forced to serve her wicked stepmother (Cate Blanchett) and despicable stepsisters (Sophie McShera, Holliday Grainger). Still, James puts in a quality performance making her character as beautiful on the inside as she is on the outside. Blanchett, as the evil stepmother Lady Tremaine, gives Disney villainesses a new low to reach for. Dressed in exquisite evening gowns, this calculating matriarch smiles in your face while stabbing you in the back. Helena Bonham Carter plays the Fairy Godmother with just enough eccentricity to make her both disarming and slightly disconcerting. And also strong are Richard Madden as the Prince, Derek Jocaobi as the King, Stellan Skarsgård as the scheming Grand Duke and Nonso Anozie as the protective Captain of the Guard.

The acting and sets exceed anything you’d expect to see in a “kids” movie. And this kind-hearted and gentle Cinderella, who is just as delightful for adults, also surpasses any “princess” we’ve seen on the screen for a very long time. These elements, combined with clever CGI, positive parent/child relationships and colorful costumes, makes Branagh’s final product magical in all the right ways. It will also undoubtedly put pressure on Jon Favreau (The Jungle Book), Bill Condon (Beauty and the Beast) and Tim Burton (Dumbo) who have been hired to helm the live action adaptations of three other classic Disney animations.

The only thing that won’t come as a big surprise is the script. Branagh sticks to the well-known plot, although he finds some interesting ways to explain parts of the storyline. But that shouldn’t stop you from seeing this version because the movie offers all the comfort of revisiting a favorite childhood tale while providing updated and amazing visuals.

Parent should be aware however that the live characters might make the action too intense for very young viewers. In some ways it feels even more disturbing than it did in the animation when Cinderella is bullied by her stepsisters, locked in the attic by her stepmother and left to deal with the untimely death of both her mother and father. As well, Lady Tremaine isn’t opposed to whacking people on the head when she wants to make a point.

As a little girl, Cinderella had the advantage of an idyllic childhood with loving parents in a quaint pastoral home. Yet even when her circumstances change, the young woman keeps to the promise she made to her dying mother to be both courageous and kind. These two qualities aren’t ones that get a lot of attention in today’s world where most “princesses” are more concerned about keeping the spotlight shining on them. And maybe that is what makes Cinderella so refreshing. This simple country girl chooses to stay true to herself rather than stoop to the level of the rabble around her.

So thank you Kenneth Branagh for being gusty enough to give us a Cinderella that is even more enchanting than the 1950 Disney original.

Violence: Frequent scenes of bullying are shown, along with a mother who occasionally hits her children. A girl is locked in her room for an undisclosed amount of time. Characters conspire against the king.

Sexual Content: Women wear low cut dresses (typical of the time) that reveal the top of some jiggling breasts. A couple kisses. Characters are seen dancing in their undergarments.

Alcohol / Drug Use: A brief scene at a house party shows some drinking.

Both Cinderella and Lady Tremaine experience the loss of loved ones. How do they each react to the deaths? How can bad events in life make a person either better or worse than they were before?

Why do you think Cinderella’s mother told her to be kind rather than nice? Is there a difference? Read Marcia Sirota’s take on the subject. How does Cinderella’s desire to always be kind affect the way she treats animals, the hired help and the old lady she meets outside? What are the positive consequences of her kindness to others?

How does the relationship between Cinderella and her parents, and the one between the Prince and his father, differ from the relationship Lady Tremaine has with her daughters? How can a person honor the memory of a parent who has passed on?

What positive life lessons can we learn from the choices Cinderella makes?

From The Studio: The story of “Cinderella” follows the fortunes of young Ella whose merchant father remarries following the tragic death of her mother. Keen to support her loving father, Ella welcomes her new stepmother Lady Tremaine and her daughters Anastasia and Drizella into the family home. But, when Ella’s father suddenly and unexpectedly passes away, she finds herself at the mercy of a jealous and cruel new family. Finally relegated to nothing more than a servant girl covered in ashes, and spitefully renamed Cinderella since she used to work in the cinders, Ella could easily begin to lose hope. Yet, despite the cruelty inflicted upon her, Ella is determined to honor her mother’s dying words and to “have courage and be kind.” She will not give in to despair nor despise those who abuse her. And then there is the dashing stranger she meets in the woods. Unaware that he is really a prince, not merely an employee at the Palace, Ella finally feels she has met a kindred soul.  Written by Disney

Note: Before the showing of Cinderella in theaters, Disney will run the short film Frozen Fever. This animation is based on the characters from Frozen.

The most recent home video release of Cinderella (2015) movie is September 15, 2015. Here are some details…

Home Video Notes: Cinderella
Release Date: 15 September 2015
Cinderella releases to home video (Blu-ray/DVD/Digital Copy) with the following supplements:
- Ella’s Furry Friends - Discover how the movie’s animal stars honed their memorable performances.
- Frozen Fever: It’s Anna’s birthday, and Elsa and Kristoff are determined to give her the best celebration ever – but when Elsa catches a cold, her powers may put more than just the party at risk.
Exclusive HD Content
- A Fairy Tale Comes to Life - Filmmakers and cast reflect on Cinderella’s enduring power, and the joys and challenges of bringing this iconic tale to life.
- Costume Test Fun - See the work of Academy Award-winning® Costume Designer Sandy Powell (The Aviator, 2004) and share some lighthearted moments with the cast.
- Staging The Ball - You’re invited behind the scenes for the making of the Palace Ball sequence, including its spectacular set, stunning costumes and more. It’s a lavish and massive undertaking…and a magical day on set.
- Alternate Opening: Ella’s Childhood - View moments from Ella’s idyllic childhood that do not appear in the movie. With an introduction by Director Kenneth Branagh.

This famous fairytale can be seen in the following film adaptations: Disney’s 1950 Cinderella, A Cinderella Story, Ever After and Happily N’Ever After.

Cinderella Is the Belle of the Ball on Opening Weekend

Celebrate the Arrival of Princess Charlotte with a Great Princess Movie

Cinderella Still Belle of the Ball in Global Box Office 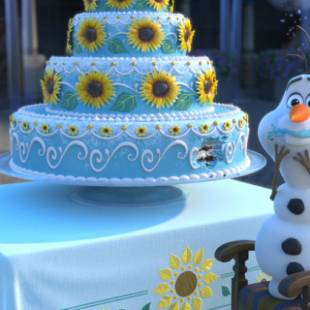