This "short" (a cartoon that precedes a feature film) is a tempest in its own tiny teapot.

Frozen fever prompts this short film about the Disney movie's favorite characters. The animation is about a birthday party for Anna (voice of Kristen Bell) that inadvertently get the cold shoulder when Elsa (voice of Idina Menzel) comes down with a cough.

If we didn’t already know Frozen was a cultural phenomenon, it is soundly confirmed when the second “movie” in this new Disney franchise can create the buzz of well over 100 major news articles (according to the IMDB’s movie page at the time of writing). Not bad for a little ditty that’s not even 8 minutes long.

Frozen Fever is what we call a “short”, or even (what is probably now considered a derogatory description) a cartoon that precedes a feature film. But this opener to Disney’s live action Cinderella is a tempest in its own tiny teapot. With the original movie grossing north of 1.2 billion, there’s certainly pent up demand from Frozen fans that want more.

Make sure you have the little ones settled into their seats because the action starts fast. It’s Anna’s (voice of Kristen Bell) birthday and because Elsa (voice of Idina Menzel) has missed a few of those in the past, she wants to throw the perfect party for her sister. She’s trying hard to get the cake and festivities just right, but with Kristoff and Olaf’s (voices of Jonathan Groff and Josh Gad) help things are bound to turn out a little different than she expected. However, nothing is as unexpected as Elsa’s impending sniffles, which leave her expelling miniature animated snowmen from her nostrils every time she sneezes. (Uh-huh… I was thinking the same thing…)

Soon there are hundreds of the little snow boogers… er… I think Disney wants us to call them Snowgies, running around and threatening to get in the way of Elsa’s fantastic fête. Of course we all know things will eventually come together, and the kingdom of Arendelle will only be better for its new inhabitants.

The mini-movie met with high approval from the audience surrounding me (especially when Elsa makes a “cold never bothered me anyway” pun), and it offers positive messages about sibling relationships and the value of friends. There is also a new song available on iTunes that’s hoping to ride the coattails of Let it Go. I also expect the Snowgies will become the minions of the Frozen franchise and will most certainly show up in the inevitable sequel—even if the creators are

Update… 2 hours later:
Disney has announced Frozen 2 is officially on its way.

Alcohol / Drug Use: A character requests a bottle of cold medication.

Elsa is hoping to make up for missing Anna’s past birthdays. Is it always possible to “make up” for past losses? Can you think of different ways to rebuild relationships?

NOTE: Frozen Fever will run in theaters before the showing of Disney’s 2015 live-action version of Cinderella.

The most recent home video release of Frozen Fever movie is September 15, 2015. Here are some details…

This movie is based on the characters from the Disney movie Frozen. 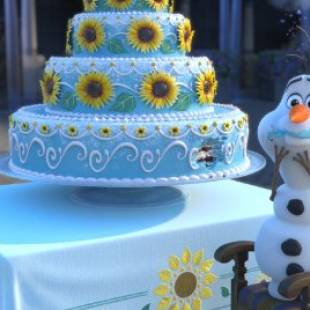