To Kill A Mockingbird Parent Guide

Based on Harper Lee's Pulitzer Prize winning boo, this film adaptation skillfully explores prejudice, racial and otherwise, all from a child's point of view.

Hollywood shines in this adaptation of Harper Lee's Pulitzer Prize winning book about an idealistic Alabama lawyer (Gregory Peck) who is asked to defend a black man (Brock Peters) accused of assaulting a white woman (Collin Wilcox). Told through the eyes of his children (Phillip Alford and Mary Badham), the movie shares lessons about prejudice and tolerance.

Violence B
Sexual Content B+
Profanity A-
Substance Use A-

“It’s a sin To Kill a Mockingbird,” Atticus Finch (Gregory Peck) tells his children. He further explains that all the feathered creatures do is make music for people to enjoy, and never harm men or their crops.

Although their father is full of such words of wisdom, from the perspective of six-year-old Scout (Mary Badham) and twelve-year-old Jem (Phillip Alford), the cautious, middle-aged lawyer is too much of a cowardly pacifist. Wrapped up in their own childish imagination, they prefer to see the world as a place of adventure, that requires some sort of shotgun to protect them from the elderly lady down the street whom they are sure hides a confederate pistol under her shawl, or the possible escape of the lunatic neighbor they have heard is kept chained to his bed.

But their silly superstitions prove to be no match for the real dangers of adult life, which begin to intrude upon their innocence the moment Atticus agrees to defend Tom Robinson (Brock Peters) against the charge of raping a white woman. The biggest event to happen in the history of their small Alabama town, the court case is sure to make 1933 a year to remember.

Despite his best parental desires, Atticus knows it isn’t possible for him to protect his young ones from all the ugly things in the world. Sure enough, angry gossip about his dogged determination to provide a fair trail for the accused comes to Scout’s attention when a schoolyard bully starts slandering her dad.

Jem gets a feel for the amount of heat the man-of-law is taking when he witnesses the explosive reaction of Mr. Bob Ewell (James Anderson), the father of the defendant. Swaggering drunkenly, he criticizes Atticus for putting the court to so much trouble, instead of just letting him kill the offender himself.

Although Scout resorts to fist-fights to express her frustration, the ever-steady attorney chooses to use the situation to teach his family about the importance of withholding judgment until “you have stood in someone’s’ shoes, and walked around in them for a while.”

Based on Harper Lee’s Pulitzer Prize winning book of the same name, the adaptation skillfully explores prejudice, racial and otherwise, all from the youngsters’ point of view. Offering first-rate performances from all cast members, beautiful photography and a compelling musical score, the Oscar winning film has become a classic. Tackling some difficult and mature subject matter, the movie keeps the violence off-screen or merely mentioned, making the production appropriate for a broader age range.

As Scout and Jem try to juggle such important issues with the mundane occurrences of everyday life, it soon becomes apparent Atticus Finch’s counsel applies to more than just mockingbirds and people’s footwear. In the process, both they and the audience have their eyes opened to the courage it takes to quietly stand for the principles in which one believes.

When an idealistic lawyer is asked to defend a black man accused of raping a white woman, his own children learn lessons about prejudice and tolerance.

Siblings squabble. Young boy complains that his father won’t allow him to have a gun. Gossip about a mentally ill neighbor includes tales of eating raw squirrels, stabbing a family member with scissors and allegations that his father chains him to a bed. Children believe an elderly woman carries a pistol, and they are afraid she may shoot them. Death threats and concerns for mob violence accompany plans for a black man’s trial. There are several suspenseful moments when children fear for their lives—sometimes these fears are imaginary, sometimes not. An angry neighbor scares away an intruder with a shotgun blast. Young girl wrestles with other schoolmates after they verbally taunt her. Man shoots and kills a rabid dog. Characters describe the murder of other characters: one by gunshot, the other by stabbing. A character spits on another. A stranger stalks children, and one of them is beaten.

A young girl is shown in her an undershirt and later in a slip. A young boy has to remove his trousers when they get stuck on a wire fence — he is seen in boxer shorts. A white woman accuses a black man of rape; descriptions of crime are not explicit and include mentions of being beaten, having bruises and an attempt of choking.

At least: Four term of deity used as expletives, as well as racial name-calling and derogatory terms for the mentally ill.

A man is depicted as a drunkard, and is seen occasionally with a bottle in his hand.

The young children who are the main characters in the story discuss the death of their mother. Children choose to ignore the council of adults and sneak out of their home at night. Attitudes about racial differences are expressed.

To Kill A Mockingbird Parents' Guide

What does Atticus take with him to the courthouse when he is concerned he may have to face an angry mob? What might you have been tempted to take? Why do Scout’s questions to Mr. Cunningham help to disperse the hostile crowd?

Sheriff Heck Tate (Frank Overton) makes some personal judgment calls about the investigation into the Mayella Ewell case, as well as questions about the behavior of Arthur Radley. Do you feel he has the right to make those decisions? How does his behavior affect the meting out of justice?

The most recent home video release of To Kill A Mockingbird movie is January 30, 2012. Here are some details…

To Kill a Mockingbird marks its 50th anniversary with these home video packages:

To Kill a Mockingbird (Blu-ray and DVD):

- Fearful Symmetry (A feature-length documentary on the making of To Kill a Mockingbird with cast and crew interviews and a visit to author Harper Lee’s home town.)

- A Conversation with Gregory Peck (An intimate feature-length documentary on one of the most beloved actors in film history with interviews, film clips, home movies and more.)

- 100 Years of Universal: Restoring the Classics (An in-depth look at the film restoration process)

- Excerpt from “Tribute To Gregory Peck” (Cecilia Peck’s heartwarming farewell to her father given at the Academy in celebration of his life.)

- Digital copy: Owners of the Blu-ray™ Combo Pack can also download a digital version of the full-length movie from participating digital retailers to enjoy on a choice of popular electronic and portable devices.

- BD-Live: Access the BD-Live Center through your Internet-connected player to watch the latest trailers and more.

- Video Timeline: Instantly access any point in the film.

- uHEAR: Skip back a few seconds on your Blu-ray disc and view subtitles for lines you might have missed.

Universal Studio’s presents this three-time Oscar winner in a two-disc set. Bonus features accompanying the classic film include Gregory Peck’s Academy Award’s Best Actor acceptance speech, his remarks when he received the America Film Institute Lifetime Achievement Award, and Cecilia Peck’s Academy Tribute to her father. His daughter also produced the included documentary A Conversation With Gregory Peck. Actress Mary Badham, who was the nominated for her performance in the film, shares her perspective in Scout Remembers. The making of To Kill A Mockingbird is looked at in great detail in the black and white film, Fearful Symmetry. The original theatrical trailers, as well as audio commentary by Director Robert Mulligan and Producer Alan Pakula, are also provided. The sound tracks are recorded in English (Dolby Digital 5.1) and French (Dolby Digital 2.0 Mono) with subtitles available in English, Spanish and French.

The fight against racial prejudice is the central theme of Freedom Song, and 12 Angry Men.

Related news about To Kill A Mockingbird 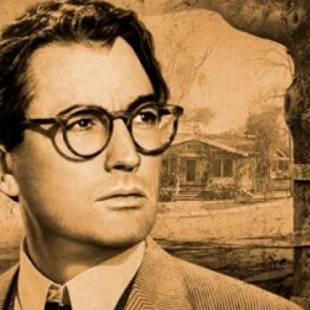