For older children and their parents, this animated adventure blends a colorful cast of characters and some valuable life lessons in a delightful storyline about friendship and individual worth.

Ever wonder how two such diverse monsters like Mike and Sulley (voices of Billy Crystal and John Goodman) became best friends? Well, it all goes back to their university days. And in this prequel you can see exactly how it happened.

Mike Wazowski (voice by Billy Crystal) and James P. Sullivan (voice by John Goodman) weren’t always the Scare Floor Dream Team at the Monsters, Inc. power company. In fact there was a time when they could hardly stand each other.

In this prequel to the 2001 animation Monsters, Inc., Sulley and Mike are among the freshman class entering the Scare program on the hallowed campus at Monsters University. For Mike, it’s a lifetime dream come true. For Sulley, it’s the fulfillment of family expectations. Unfortunately for both of them, it’s a big disappointment when they are ousted from the program after accidentally destroying a cherished memento belonging to the school’s Dean Hardscrabble (voice by Helen Mirren). The only way to get back in is to prove themselves at the upcoming Scare Games. But to do so they need to be part of a campus fraternity. And the only one still taking applicants is the OK House.

The OK frat members are a sorry lot. Don (voice of Joel Murray) is a mature student who came back to college after being downsized from his sales job. Art (voice of Charlie Day) is a free spirited monster with a questionable past. The brothers Terry and Terri (voices of Dave Foley and Sean Hayes) share one body for their two heads and Squishy (voice of Peter Sohn) is the chubby, multi-eyed monster whose mother owns and runs their frat house. They are the least athletically endowed monsters on campus. But although neither Mike nor Sulley is happy about having to team up with these outcasts or share a room in their new frat house, both are bent on getting back in the school’s prized program.

While the Scare Games resemble a reality-TV episode, the story focuses less on the actual competitions and more on the preparations that happen between events. This mishmash of monsters learns to work together, to appreciate and use their individual talents and to take responsibility for their mistakes and choices. Most of all, Sulley and Mike overcome their aversion to one another and begin a lifelong friendship that follows them into the future.

Like the first movie that depicted children’s screams as a power source for the city, Monster University probably isn’t for the very youngest of audience members. There are still plenty of moments of peril and scenes where the scary creatures sneak into a simulated bedroom and elicit screams from a sleeping child. And like some college students, these monsters get involved in brief illegal activities that have them hightailing it from the law.

Yet for older children and their parents, this animated adventure blends a colorful cast of characters and some valuable life lessons in a delightful storyline about individual worth and a budding friendship. Living up to the old adage that opposites attract, the big blue beast and his little green friend demonstrate that the best things in life often come in pairs.

Violence: A character deals with some moments of bullying in elementary school and university. A character steals a frat house mascot. Participants in an initiation process are each hit once with a flat bat. Characters run into spiked objects that cause instant inflammation during a game event. A character uses a slingshot to shoot one of these objects into the open mouth of a game player, causing his whole body to swell. Characters cut open a wire fence and illegally enter at industrial site. Security officers chase characters on at least two occasions. A character admits to cheating and lying. Moments of brief peril and some jump scenes are included, along with frequent non-graphic violence. Monsters are shown in a comic content.

Sexual Content: A character asks his new girlfriend to give him some sugar. Brief kissing is shown. Partial male buttock nudity is briefly seen after it becomes swollen.

Mike discovers that dreams don’t always come true, even if you really want it and are willing to work hard. How does he adjust his expectations in life and find a new way to achieve his goals? How does he deal with disappointment?

Mike is repeatedly told as a child and as a college student that he “doesn’t belong.” Although this negative comment is very hurtful, how does Mike choose to respond to it? How does he use it to overcome challenges and develop a resilient and optimistic outlook? How can parents help their children deal with similar negative comments from peers?

What consequences does Sully face his choices? Does a person’s appearance or outward bravado sometimes misrepresent how he or she feels inside?

What does the OK team learn about each other’s strengths? What is each member able to contribute? How do their actions influence the Scare program’s director?

The most recent home video release of Monsters University movie is October 29, 2013. Here are some details…

Monsters University release to home video in the following packages:

- Campus Life – What’s it like being on a production crew at Pixar? Get a look at a day in the life of the “Monsters University” crew through their own eyes.

- Story School – This documentary examines the challenges of creating a prequel as well as themes that run through the story, and the change in focus from Sulley to Mike.  We’ll also look at how gags are developed – from writing jokes to brainstorming a million ideas, only 5% of which actually end up in the movie.

- Scare Games – At Pixar, we play hard while we work.  The same people who keep the film production moving - producers, managers, coordinators and artists - are also the ones who bring spirit and excitement to some of our extracurricular activities. We check out the MU production teams as they go head to head in the mostly playful Pixar Scare Games competitions.

- Welcome to MU – Sets aren’t just buildings, they are the worlds our characters live in and explore.  This look at the Monsters University campus and its development is told from the perspective of the artists who created each piece of the campus from the architecture to the ivy leaves.

- Music Appreciation – Randy Newman’s scores are a mainstay of Pixar films, and this documentary will give you a privileged look at his creative process.  We follow the “Monsters University” scoring process from spotting to writing and on to the scoring session. including special college-themed recording sessions.

- Scare Tactics – Animators are actors who digitally bring the characters to life. In this look at how the MU animation team worked, you’ll see their process of how they channeled their own monster-selves and created moments on screen that were really funny, really scary and also really serious, sometimes all at the same time.

- Color and Light – How can a single painting set the tone for an entire scene? We’ll look at the creation of the colorscripts and how they were realized technically in the final film.  Along with the process, this piece explores the many layers of technical innovation required to produce such a naturalistic feel.

- Paths to Pixar - MU Edition – When one door closes, sometimes another door opens – one with an even more exciting opportunity behind it. Members of the MU crew tell their own compelling backstories and share the challenges they overcame along their paths to Pixar.

- Furry Monsters: A Technical Retrospective – Explore the difficulties in creating characters that are 20 years younger with tools that are 10 years more advanced in this contrasting look at the differing technical challenges that arose when making “Monsters, Inc.,” and “Monsters University.”

- “The Blue Umbrella” – This animated short film from Pixar Animation Studios, directed by Saschka Unseld and produced by Marc Greenberg, played in theaters in front of “Monsters University.” “The Blue Umbrella” tells the story of an evening commute in which the rain starts to fall and the city comes alive to the sound of dripping rain pipes, whistling awnings and gurgling gutters. And in the midst, two umbrellas—one blue, one not—fall eternally in love.

Monster University is also available on DVD with the following extras:

This movie is a prequel to Monsters, Inc.. Directer Dan Scanlon also worked on the Pixar film Cars, and producer Kori Rae had a hand in Up, The Incredibles and the original Monsters, Inc. 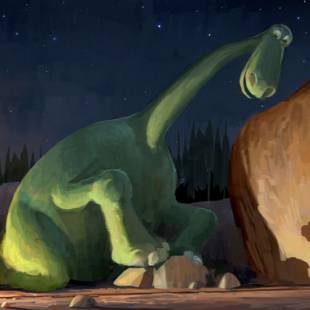