Marrying fantastical premises with charming, believable characters, this aerostat adventure is a definite thumbs "Up" experience for everyone from older children to senior citizens.

Seventy-eight-year-old Carl Fredricksen (voice of Edward Asner) has always wanted to see South America, so he ties thousands of balloons to his house and heads UP and away on the adventure of a lifetime. All seems to be going according to plan until the elderly man discovers some excess baggage, in the form of a pesky nine-year-old named Russell (voice of Jordan Nagai), who has inadvertently come along for the ride.

Violence B-
Sexual Content A
Profanity A
Substance Use A-

Why is Up rated PG? The MPAA rated Up PG for some peril and action.

When a studio is as consistently successful as Pixar has been, audiences almost hold their breath in anticipation of a misstep. Thankfully, we can all inhale deeply. Honored as the first animation and first 3D film to open the Cannes Film Festival, Up celebrates the elderly in much the same way The Incredibles validates those who are experiencing middle age.

Still, despite the company’s track record for family friendly fare, don’t expect this film to be suitable for all ages. Several intense scenes, including one in which a man sustains a bloody injury after being hit over the head with a cane and the portrayal of a house fire, are likely too frightening for young or sensitive viewers.

The aging hero of the story is Carl Fredricksen (voiced by Edward Asner). Despite some disappointments through the years, he has lived a full and satisfying life. But the 78-year-old man still has one childhood goal to achieve—a promise he made to himself and his friend Ellie (voiced by Elie Doctor). With his house now surrounded by ever encroaching urban development, Carl uses hundreds of colorful, helium-filled balloons to lift both him and his home out of the city and propel them off on a quest to visit an exotic, foreign location.

However, while hovering high above the countryside, Carl discovers a stowaway on his front porch. Russell (voiced by Jordan Nagai) is an earnest but woefully inexperienced Wilderness Explorer who was hunting for snipes under the house when the building became airborne. Pleading to be let in, Russell joins the ill-humored old man on his high-flying voyage.

Pixar’s attention to the most minuscule of details, like dust particles wafting through an abandoned house and the thickening stubble on an old man’s face, give visual depth and reality to this 3D experience. Meanwhile, a strong storyline that is equally funny, tender, poignant and hopeful propels Up far beyond the realms of a mere children’s cartoon. The jokes are based not so much on slapstick as they are the funny realities of life, like those experienced by any parent and child on a long road trip.

Marrying fantastical premises with charming, believable characters, this aerostat adventure is a definite thumbs Up experience for everyone from older children to senior citizens.

Why is Up rated PG? Up is rated PG by the MPAA for some peril and action.

While this animated film contains a strong storyline and well-timed humor, there are several scenes of intense peril and some violence that may disturb younger viewers. An old man hits another man over the head with his cane. The result is a bloody head injury. An animal bleeds after being bitten on the leg. A child falls from a second story in an old house resulting in a broken arm. A character admits to tearing a picture out of a library book. A sad young couple is shown in a doctor’s office after learning they cannot have a child. An elderly character experiences loneliness after the illness and death of a loved one. Travelers experience the tumult of thunder and rainstorms. On several occasions, dogs chase humans or other animals. Animals fall over a cliff into a river below. A dog bites a man. Two men fight using a sword, cane and other items. Moments of peril are shown when a house is started on fire, pilots in fighter planes shoot darts at a child before crashing and an animal is captured in a net. Later, characters are shown crawling along the top of a blimp. A character falls from the blimp with death implied. A character makes comments about using the bathroom in the wilderness. Dogs serve champagne to two human adults.

In Up‘s opening short, Partly Cloudy, storks are shown delivering babies of both the human and animal type. One stork has his head bitten by a baby alligator, is bunted by a baby mountain goat and impaled by a baby porcupine. Later he is shocked by an electric eel.

What does Carl have to get rid of in order to be the hero in this film? How can possessions, past grievances or other issues keep people from progressing or fully enjoying life? What positive things come out of his relationship with Russell?

To get the eager Wilderness Explorer to quit bothering him, Carl sends Russell on a snipe hunt. For anyone who hasn’t gone to camp or experienced this activity, you can learn more at this Wikipedia article.

Having lost our family pet in the recent past, I wonder what our dog would have said if he had been given a voice. Would you want to be able to have your pet "speak" or is it better to have the benefit of a more silent companion?

The most recent home video release of Up movie is December 3, 2012. Here are some details…

Disney Studios re-releases Up to home video in a 3D version. The 5 Disc package includes a Blu-ray 3D, Blu-ray, DVD and Digital Copy of the movie.

Up soars onto DVD in an anamorphic (enhanced for widescreen TVs) presentation, with audio tracks in Dolby Digital 5.1 (English, Spanish and French). Other bonus materials include:

- Alternate endings: The Many Endings of Muntz

- Documentary: Adventure is Out There

Up: 2-Disc Deluxe Edition DVD and Digital Copy offers all of the extra features of the DVD version of Up, plus a digital copy of the movie.

Up on Blu-ray, with a DVD and Digital Copy is presented in widescreen (in1080p HD resolution), with audio tracks in DTS-HD Master Audio 5.1 (English). Bonus materials include:

- Alternate endings: The Many Endings of Muntz

- Documentary: Adventure is Out There

- Featurettes: Balloons and Flight, Composing for Characters and Married Life.

- Digital Copy of Up.

Five People You Meet in Heaven is an adult-oriented film that deals with an aging couple’s shared life experiences. A young boy shatters the peace of his two aging great-uncles when his mother drops him off for the summer in Secondhand Lions.

Related news about Up 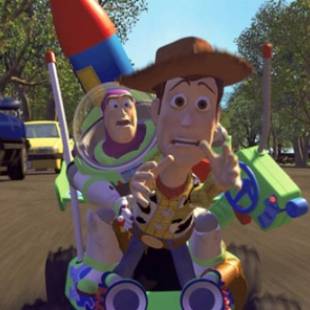 New Trailer Released for Inside Out