Lightning McQueen (voiced by Owen Wilson) is a little, red race car with big, bright ambitions. When he is accidentally detoured in the dusty town of Radiator Springs, Lightening meets the eclectic locals (voiced by Bonnie Hunt, Paul Newman, and Larry the Cable Guy) who try to help the hyperactive hotrod understand there are more things worth revving one's engines over than just speed.

Violence B
Sexual Content B+
Profanity A-
Substance Use B+

Why is Cars rated G? The MPAA rated Cars G

If you were a car, what would you be? A sporty Ferrari, a powerful SUV, a practical minivan, or a rusty old antique? In Radiator Springs, there’s a vehicle nearly everyone can relate to.

Unfortunately, the town appears to be on its last oil change. Following the construction of a new Interstate, the once-thriving community on Route 66 has been bypassed and is now nearly abandoned. Only the stalwarts still live there. Among them is Sally Carrera, a 2002 Porsche 911 (voiced by Bonnie Hunt), Fillmore the 1960 hippie VW van (voiced by George Carlin), Luigi the 1959 Fiat 500 (voiced by Tony Shalhoub), and Mater the toothy tow truck (voiced by Larry the Cable Guy).

However, the sleepy little village gets an infusion of high-octane fumes when Lightening McQueen (voiced by Owen Wilson), barrels into town, unintentionally ripping up the road and destroying public property. It seems the cocky red racer became lost after falling out of his car carrier (voiced by Pixar regular John Ratzenberger) while heading for a track in California.

But despite the hot-rod’s pleas to let him get back on the road and off to the races, the local residents aren’t about to let Lightening leave without fixing things up. Under the gruff gaze of Doc Hudson (voiced by Paul Newman), the rookie is sentenced to repair the road by pulling the lumbering paving machine down Main Street.

Celebrated as the youngest car ever to have a shot at the Piston Cup, Lightening is revved to beat his top competitors, The King (voiced by racing legend Richard Petty) and Chick Hicks (voiced by Michael Keaton) at the LA International Speedway. Yet after spending a few days in Carburetor County, the self-centered rookie begins to realize that life isn’t all about finish lines, accolades and clicking cameras. Sometimes even a race car needs to shift down and enjoy the journey.

Infusing the car lot with the same charm it brought to the toy box (in Toy Story I and II), Pixar relies on a mix of comedy, drama and a little romance to tell the tale of these autos’ attempts to get their town back on the map, all while enjoying a night of tractor tipping or an afternoon drive up the canyon. In addition to being fully loaded with personality, many of these animated automobiles are further enlivened by the vocal talents of real racing legends such as Dale Earnhardt Jr., Darrell Waltrip, Mario Andretti, and Michael Schumacher.

Like the company’s previous films, Cars manages to mix humor for adults and children, although the script contains some mildly suggestive sexual comments, a few sentences that stop just short of a profanity and Fillmore’s famous homemade organic fuel made from questionable ingredients. Rolling in at nearly two hours long, the movie could also be a bit lengthy for young audience members who may need a pit stop along the way.

Still the back roads and small towns of America have never been more entertaining than Radiator Springs, where having a great time is far more important than making great time.

Why is Cars rated G? Cars is rated G by the MPAA

All the attention of being a world-class racecar goes straight to Lightening McQueen’s head. As a result he is rude to his pit crew and obnoxious with the other competitors. During a race, one car bumps the others, causing a major accident on the track. On a long road trip, a tired truck starts to fall asleep and nearly causes an accident. A gang of hotrods harasses other cars on the highway. A car tries to outrun a train at the crossing. While fleeing from the police, a car causes massive property damage and later tries to avoid the consequences. During a road race, a car misses the turn and crashes on the side of the road. A hippy van sells homemade organic fuel (referred to as freak juice). For entertainment, two cars go “tractor tipping”. An angry combine later chases them. There are some veiled sexual references and comments, among them a car flashes his headlights at another, cars cuddle up and kiss, and a car exposes its undercarriage. A character comments on a car’s pin striping tattoo. The script also includes some name-calling, near profanities and jokes based on misunderstood words.

Despite his wild popularity, Lightening McQueen doesn’t have any real friends. How do his actions and attitudes toward others contribute to that? Who teaches him about being a “best friend”? Why is trust important in a good relationship?

After ripping up the town, Lightening is forced to pay the consequences for his destructive behavior. How does that community service change his attitude? What does it teach him about himself and others? Is it important to be held accountable for our actions?

For more information on the real Route 66 and its importance in American history, check out the following sites:

The most recent home video release of Cars movie is October 29, 2013. Here are some details…

- Nuts and Bolts: A Sneak Peek of Cars Land

- Set Explorations from the Different Cities in the Movie

On April 12, 2011, Cars releases to Blu-ray in a Two-Disc Blu-ray/DVD Combo package. Bonus materials include:

- Mater And The Ghostlight Short - Now In Hi-Def

- Cine-Explore - For The Ultimate, Behind-The-Scenes Experience

- Mater And The Ghostlight Short

Gentlemen, start your DVDs. Cars is racing into the home entertainment market packed with a lot of flashy accessories. Whether you chose the wide or full screen presentations, the disc offers a new animated short: Mater and the Ghostlight as well as the Academy Award-nominated animated short: One Man Band. Director John Lasseter shares his inspiration for the production. Also tossed in are deleted scenes and a Ratatouille teaser trailer. Audio tracks are available in English (Dolby Digital 5.1 EX and Dolby Digital 2.0 Surround), with subtitles in English.

Herbie is a little white racecar with a mind of his own in The Love Bug. In an updated version, Herbie: Fully Loaded revisits the trackside antics of the little bug and his current female driver. 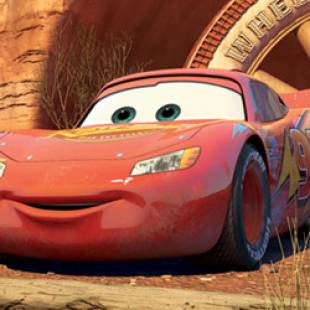