Other motives have already taught us the atrocities of wart. "Fury" attempts to ditto that simply by delivering more gore and turning up the volume.

Sergeant Wardaddy (Brad Pitt) knows WWII may be nearing the end, but the killing isn't finished. If he and his crew are going to survive, they must push through enemy lines with only the protection of a Sherman tank nicknamed Fury.

Why is Fury rated R? The MPAA rated Fury R for strong sequences of war violence, some grisly images, and language throughout.

If you come to Fury expecting to have your patriotic batteries recharged, leave the theater immediately, go home and rent Captain America. Frankly, I’m not absolutely certain what writer/director David Ayer wants us to learn after sitting through this meat grinder of a movie. War is hell? That’s my best guess. But this certainly isn’t a vehicle meant to generate admiration for our fighting forces.

Brad Pitt stars as Don Collier, a tank commander known as Wardaddy. We’re late in WWII and Wardaddy, along with his crew, has fought his way through Africa and France. Now he’s in the homeland of the Nazis. His tank-mates are the religious Boyd ‘Bible’ Swan (Shia LaBeouf), American-Mexican Trini ‘Gordo’ Garcia (Michael Peña) and Grady ‘Coon-Ass’ Travis (Jon Bernthal). We meet the beleaguered group at a muddy supply post. They’ve lost their bow gunner in the last battle—his dismembered and bloody remains are still in the tank. It’s at this point we are introduced to Norman Ellison (Logan Lerman), the replacement man who will sit in the gunner/assistant driver’s seat.

Norman is a proxy for us, the audience huddled up in the theater with a warm tub of popcorn. (Frankly, if you’re even slightly queasy at the site of gore, forego the snacks.) The closest you can get to a “geek” in 1945, young Norman has only been in the military a few weeks and is a clerical typist, proud of his 60 words-per-minute ability. He has been implausibly selected to help operate a tank. Vomiting while performing his first duty, cleaning out the human debris, Norman can barely comprehend the horrific world surrounding him.

Of course Wardaddy isn’t happy with his new recruit. And the rest of the movie will focus on the commander’s efforts to break Norman into the reality of the fight. He begins by commanding the kid to kill a captured Nazi solider. The novice initially refuses to comply, and then begs Wardaddy to take his life rather than the prisoner’s. A scuffle ensues until Wardaddy pins Norman, forces the gun into his hand and then makes him pull the trigger. It’s the first lesson in War 101. Not surprisingly, in short order Norman is shooting bullets and profanities at the Nazis with the best of his crew. Wardaddy is proud of the monster Norman has become. And director Ayer is hoping we, the audience, have had a similar transformation.

In an attempt to provide us with a virtual battlefield experience, Fury constantly attacks our eyes and ears with violent imagery of dismembered, bloody body parts strewn across the landscape by blisteringly loud, exploding ammunition. Countless sexual expletives punctuate the blasts. For added effect, some of these injuries and killings are seen on screen. Certainly it left me convinced I never want to go through the horrors these men are enduring, however this assault to my senses seemed gratuitous and also drowned out the film’s scant character development.

Other than Norman, who epitomizes the innocence lost in battle, the other four men do little but fight, drink, swear and fight some more. One of the weak attempts to round out these characters is focused on southerner Grady Travis, who is portrayed in stereotypical, small gene pool, hillbilly fashion. He takes an immediate disliking to Norman. The increased patience and attention the young boy later receives from their commander only exacerbates Grady’s resentment. Yet after just a few more script pages, Grady completely changes his attitude. Less ammo and more dialogue would have made this unexpected apology far more logical, and sincere.

Then there is the curious portrayal of these US soldiers during one of the few scenes without combat. After taking back a village from the Nazis, these men (plus other secondary military characters) are quick to find the terrified women and fulfill their own sexual frustrations. Even the high-minded Norman doesn’t have the same averse attitude to impulsive sex that he has to killing. He quickly succumbs to Wardaddy’s suggestion that he bed a young German lady. (We see them embrace, with sex afterward strongly implied.) Other soldiers are seen terrorizing and verbally abusing more females.

Again we assume this scene is a continuation of convincing us that war turns men into savages, no matter which side they are on. However, this encounter, along with the unnecessary gore surrounding it, seems to be more directed at fulfilling the perceived machismo desires of the target audience.

Fury, I’m sure, was a difficult movie to make—if for no other reason than these actors are covered in mud for almost every scene. The performances are solid and the violent effects are convincing. The message, on the other hand, is mostly lost to blasts and blood. Saving Private Ryan and a legion of other movies have already taught us the atrocities of war. Fury attempts to ditto that simply by delivering more gore and turning up the volume. In so doing, it crosses the fine line between displaying violence as a motivation toward positive change in the audience, versus simply entertaining the paying customers. In the end, instead of engendering respect, you are more likely to feel pity for and toward these fighting men.

Why is Fury rated R? Fury is rated R by the MPAA for strong sequences of war violence, some grisly images, and language throughout.

Violence: This film portrays frequent gory, brutal war violence throughout. There are frequent depictions of beatings, shootings, stabbings, dismemberment, explosions and characters in flames. These acts are often showing with highly detailed injuries and blood. Bloodied and dismembered corpses and nearly dead men are frequently seen. Disturbing actions are sometimes depicted in relation to these portrayals. Some characters commit or consider suicide as a way of avoiding pain or capture by the enemy. (Detailing the explicit nature of these scenes is not in keeping with our editorial policies of maintaining an age-appropriate website at Parent Previews.)

Sexual Content: A young solider begins kissing and embracing a young woman he has just met minutes earlier. The scene ends with sex strongly implied. Other military men harass and make lewd gestures and remarks to civilian women. One man fondles a woman from behind. Crude sexual remarks and innuendo are included.

Language: Pervasive use (at least 80 occurrences) of the sexual expletive and variations, sometimes in a sexual or aggressive context. Scatological slang, cursing, profanity, and vulgar expressions are heard along with some detailed sexual language. Ethnic slurs are spoken.

Alcohol / Drug Use: Characters are frequently seen smoking cigarettes and tobacco products. Characters drink while at battle, sometimes to the point of inebriation.

This movie is a fictional story based within an historical context. How does fiction differ from fact? Do movies like this have the ability to distort our view of history? Why do you think the soldiers in this movie were portrayed as dedicated to fighting the Nazis, yet they were less than honorable in moral behavior? In reality, do you think many soldiers share these traits?

Learn more about the use of tanks in the battles of World War II.

The most recent home video release of Fury movie is January 27, 2015. Here are some details…

Home Video Notes: Fury
Release Date: 27 January 2014
Fury releases to home video (DVD or Blu-ray) with the following extras:
- Fifty minutes of deleted and extended scenes.
- Four behind-the-scenes featurettes
Blu-ray Exclusive Bonus Features include:
- Fifty minutes of deleted and extended scenes.
- Photo Gallery
- “Director’s Combat Journal” - David Ayer gives an account of the months spent in the English countryside shooting, finding antique tanks to drive and managing the scale of production that a WWII movie demands.
- “Armored Warriors: The Real Men Inside the Shermans” - Some of the real-life soldiers who lived and fought day-to-day in a Sherman tank reflect on their WWII experience.
- “Taming the Beast: How to Drive, Fire, & Shoot Inside a 30-Ton Tank” - Experts demonstrate how the giant Sherman tanks operate and fire. In this featurette, the camera also goes inside the tank to bring an in-depth, point-of-view experience, along with cast and crew reflections on filming in the “human sardine can.”
- “Blood Brothers” featurette - The cast and crew discuss their roles and on-set dynamics.

Other movies about World War II include The Great Escape, Tora! Tora! Tora!I and Valkrie. 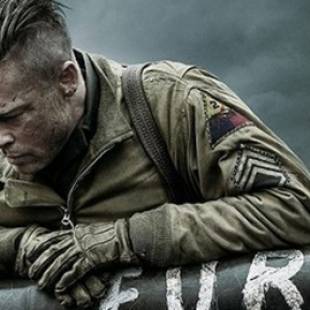