Director Joe Johnston captures a comic book feel in this live action production that combines humor and a sprinkling of romance with plenty of high adventure.

When he fails to pass the test for military service, a young man (Chris Evans) agrees to take part in a secretive government research project. Subjected to an experimental serum, he becomes the US Army's first line of defense as Captain America.

Violence C-
Sexual Content A-
Profanity B-
Substance Use C+

Beginning in the 1930s, bodybuilder Charles Atlas promised skinny guys (who got sand kicked in their faces at the beach) that he could "manufacture weaklings into men" with only 15 minutes a day. He even had a “Proof-in-7-Days” offer.

Comic book readers from the 1940s would have been familiar with the Atlas ads that frequently ran in those magazines. And Steve Rogers’ (Chris Evans) transformation from a scrawny scrap of a guy into a muscle-bound avenger would have been right in keeping with the hopes of every undersized kid who poured over the story of Captain America.

Orphaned as a child, Steve is a spunky soul who refuses to run from a fight—even if he is clearly losing the battle. During World War II, he repeatedly shows up at the U.S. Army’s recruitment offices to volunteer. But every time the 90 lb. weakling’s form is stamped 4F. (In the trailer, Rogers’ paperwork is punched with "rejection" to make it clear for those who are unfamiliar with the military’s code for an applicant who is unsuitable for service.)

However Steve’s pertinacity finally pays off when he crosses paths with Dr. Abraham Erskine (Stanley Tucci), a German-born scientist who has developed an experimental serum. Inducted into a top-secret program as a human guinea pig, Steve is injected with the unproven liquid before Howard Stark (Dominic Cooper) blasts him with a dose of “Vita-Rays”. This light activates the chemicals in his body and enhance everything about him. (That includes his metabolism, which now makes it impossible for him to get drunk even though he tries.)

Almost immediately after his transformation, Steve becomes aware of the evil intentions of Nazi leader Johann Schmidt (Hugo Weaving) when a German spy infiltrates the secret lab and shoots the doctor while attempting to steal the last vial of the serum. But despite Steve’s superhuman abilities, Colonel Chester Phillips (Tommy Lee Jones) hesitates to use the untested soldier in his unit. As a result, Steve finds himself wearing tights and hawking war bonds with a group of showgirls until American agent Patty Carter (Hayley Atwell) offers him an opportunity to prove what he can really do for the war effort.

Director Joe Johnston (known for his period pieces October Sky, The Rocketeer and Hidalgo) captures a comic book feel in this live action production that combines humor and a sprinkling of romance with plenty of high adventure. The CG images also enhance the experience. (Most interesting may be the metamorphosis of Chris Evan’s bulked-up body into a bony boy with the help of body shrinking computer techniques.)

Like many of the other recent Marvel Comic movies (Thor, Iron Man, Iron Man 2 and The Incredible Hulk) released in anticipation of the 2012 film The Avengers, war violence will be the biggest concern for family viewers. The most startling depicts the bloody results of a man flying through a whirling airplane propeller.

Violence: A falling wall crushes a man. Characters are shot at close range, some on screen. A man’s clothing is splattered with the blood of one of his victims. Numerous scenes depict intense hand-to-hand combat and warfare including gunfire, explosions, tank use and bombs. Soldiers with bloody injuries and corpses are seen. A character is beaten in an alley. A woman punches a man and knocks him to the ground. Brief medical procedures are shown. A character commits suicide by ingesting poison. A child is held as a hostage. A man steals a car during a chase scene and fires shots on a busy city street. Characters are vaporized with a special gun. A woman fires a gun point-blank at a man. A character falls over a cliff and dies. A man flies through a propeller with bloody results. Characters are bullied. Infrequent grotesque images are portrayed.

Sexual Content: Showgirls are shown in dance costumes. A man moons another character (not seen on screen). Couples kiss.

Language: The script includes infrequent mild profanities, some slurs, and name-calling. Brief vulgar comments are made along with some mild sexual references.

Alcohol / Drug Use: Characters drink or are shown in bars on several occasions. Some characters drink liberally. A man attempts, without success, to get drunk. Characters are injected with an unproven serum.

During one attack scene, Patty participates without wearing a helmet while all the male soldiers are outfitted for war. How does this portrayal play into her role in this story? How are other women depicted in this movie? Are their soldiering efforts ever taken seriously? Or are they merely included for eye candy?

How doe the computer-generated effects in the movie help create the feel of a comic book? What other factors contribute? What are the challenges of bringing a comic book character to life?

Why does Steve refuse to let his size keep him from being involved in the war? How can weaknesses contribute to the development of other strengths?

The most recent home video release of Captain America: The First Avenger movie is October 25, 2011. Here are some details…

- Marvel One Shot: A Funny Thing Happened on the Way to Thor’s Hammer

Chris Evans stars in another superhero role as Johnny Storm in the Fantastic Four and Fantastic 4: Rise of the Silver Surfer

Captain America: The First Avenger isn’t the only movie where filmmakers have been faced with the challenge of altering a character’s body. The actors and crew of Cast Away put production on hold for two years to allow Tom Hanks to lose weight. (He put on 50 pounds for the movie’s opening scenes, but needed to appear to have been stranded for several years for the rest of the production.) A body double was used for Brad Pitt’s character in The Curious Case of Benjamin Button and the head of Armie Hammer was imposed on the body of actor Josh Pence’s body so he could play twins Tyler and Cameron Winklevoss in The Social Network.

5 Things to Love about Captain America 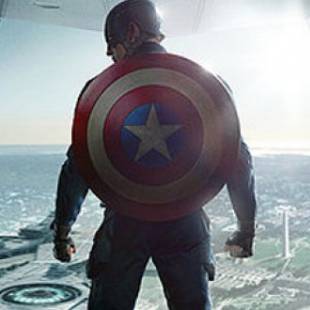 Patriotic Films for the 4th of July

13 Reasons Why and the Portrayal of Teen Suicide.