It’s easy to get caught up in the Christmas whirl of gifts, decorations, and (in non-covid years) parties. If you want to gather the family for a quiet night to watch movies that look at the deeper meanings of Christmas, these are some of our favorite movies about the real spirit of the season. (For Santa movies, check out our article, Santa Claus Is Coming to Town.)

You’re a Mean One, Mr. Grinch

Few kids’ books are as closely associated with the season as is Dr. Seuss’s immortal How the Grinch Stole Christmas. And no filmed version can equal the 1966 television special with Chuck Jones’ animation and Thurl Ravenscroft’s vocals. Watching the Grinch’s change of heart is sure to bring the Christmas spirit into any home. Digital on Demand; Free on YouTube Unrated, Grade: A-

The crotchety recluse’s tale was given full CGI treatment in 2018 with the release of The Grinch. With a whole lot of extra time to fill, this movie adds in a backstory for the Grinch and for Cindy Lou Who. It’s brightly colored, with beautiful visual design and great voice talent. This could well become a new family tradition. (Just don’t jettison the original.) Netflix PG, Grade: A-

The least charming movie of the bunch is Jim Carrey’s live action version, released in 2000. Plagued by Carrey’s creepy prosthetics and crude humor, this film is best set aside in favor of the other options. Netflix PG, Grade: B

The spirit of Christmas has the power to change even the hardest heart, and that’s the message of Charles Dickens’ classic novella, A Christmas Carol. This beloved tale has been adapted by Hollywood on numerous occasions, one of the best known being the 1951 black and white version starring Alistair Sim. (It’s also found under the title, Scrooge.) Digital on Demand Unrated, Grade: A

Other straightforward adaptations of the movie include the 1984 version starring George C Scott and the 1999 version with Patrick Stewart as Ebenezer Scrooge (both available for digital rental).

Ebenezer Scrooge’s story of personal redemption has been retold by other filmmakers, but none more successfully (or hilariously) than in The Muppet Christmas Carol, which ranks as one of the best family Christmas movies. Michael Caine stars as the miserable miser, with muppets galore contributing to an atmosphere of zany good cheer. Disney+ G, Grade: A-

Thanks to its enduring appeal, this story has been adapted for all ages, with Mickey’s Christmas Carol aimed at young viewers who might be frightened by more faithful versions. With Mickey Mouse playing Bob Cratchit and Scrooge McDuck as, who else but Ebenezer Scrooge, this is a feel good story for the entire family. Disney+ G, Grade: A

Not satisfied with traditional animation, the technical wizards at Disney released a CGI version of the story in 2009. The technology feels a bit dated now, but this film earns kudos for remaining relatively faithful to the original story. Disney+ PG, Grade: B+

One of the strangest adaptations of the story is A Christmas Carol,which tells much of the tale through dance with voiceover narration. This version has striking set design and will interest dance afficionados. It is not suited to young viewers. Digital on Demand Unrated, Grade: B-

Animation is the star in Scrooge: A Christmas Carol.This is a faithful retelling of the story, enlivened by high quality animation and a talented voice cast. The real drawback here are the unnecessary musical numbers which feel bloated and cheesy. Netflix TV-Y7, Grade: B

Following the theme of outlandish adaptations is Dolly Parton’s Christmas on the Square. The indomitable Dolly Parton stars as an angel determined to save Christmas and change the heart of a wealthy woman who has sent eviction notices to an entire town. Netflix TV-PG, Grade: B+

The Man Who Invented Christmas is a particularly clever film, part biopic, part book adaptation. It digs into the life of author Charles Dickens, examining the financial pressures that led to A Christmas Carol and imagining the way his past and his family contributed to the story. Hulu, Kanopy; Digital on Demand PG, Grade: A

Although there are so many fine filmed versions of this tale, they aren’t all family friendly. This is a heads up to parents – Scrooged, which stars Bill Murray in a modern day adaptation, embroiders Dickens’ story with violence, crude sexual innuendo, and profanity. Digital on Demand PG-13, C-

Less crass but still unsuited to kids is Spirited, a musical adaptation of Scrooge’s story. With crude sexual references, profanity, and scenes of violence and alcohol consumption this is not family friendly – and it’s not a lot of fun either. Apple TV+ PG-13, Grade: C

Joyeux Noel is a French film about the 1914 Christmas truce. Filmed in three languages – English, French, and German – the subtitled movie tells the touching story of troops from Scotland, France and Germany, who put down their guns to worship together on that memorable Christmas Eve. This film has a powerful message of shared humanity, peace, and love, but it comes with some nudity and sexual content that makes it unsuitable for young viewers. (What can we say – French moviegoers are less concerned about sexual content.) Crackle, Digital on Demand PG-13, Grade: B+

The Reason for the Season

The transformative power of Christmas, Christians believe, comes from the baby whose birth is the reason for the holiday. For a fine re-enactment of the story of Jesus’ birth, you can watch the live movie version of The Nativity Story. Digital on Demand PG, Grade: A

The Star provides an animal’s-eye view on the events of the first Christmas. This animated tale takes significant liberties with the biblical timeline but is a funny, gentle story that’s suitable for kids. Digital on Demand PG, Grade: B

The events surrounding Christ’s birth take on a new level of significance for a young man when his mother is evicted. She sends him to stay with his grandparents – his doting grandmother and stern, pastor grandfather. As the spirit of Christmas swirls through Harlem, the events of the nativity seep into his dreams. Black Nativity is a musical celebration of Christmas that also celebrates Christian virtues of humility, forgiveness, and love. Digital on Demand PG, Grade: A-

Bringing comedy and lessons about the real meaning of Christmas down to the level of little kids, The Star of Christmas is a movie spin off of the Veggie Tales series. When Bob the Tomato and Larry the Cucumber learn that their lavish play will be competing with a parish pageant that includes the rare Star of Christmas, hijinks and chaos ensue before the appropriate lessons of love and cooperation are learned by all. DVD Unrated, Grade: B+

The Civil War shattered the already weakened faith of Henry Wadsworth Longfellow, legendary American poet. With his son at the front, Longfellow sinks into despair. The story of how he regains his faith and pens the great Christmas anthem is told in I Heard the Bells. Theatrical release. Streaming as yet unknown. Unrated, Grade: B

When we get overwhelmed with the chaos of Christmas, it’s time to settle down and watch A Charlie Brown Christmas. Everyone’s favorite doomed optimist is doing his best to fight back against the commercialization of Christmas only to be mocked for his efforts. But as we all know, his choice of a Christmas tree and his work on the Christmas pageant will remind us that love is the real heart of Christmas. AppleTV+ Unrated, Grade: A

If you’re wondering where to find the digital on demand films, try reelgood.com. Moviegoers outside the US can turn to justwatch.com which tracks international streaming platforms. 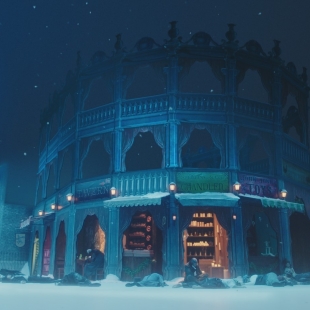 No singing but lots and lots of dancing in this Christmas carol.