The dancing is strange but the visual design is unique and intriguing.

Digital on Demand: This adaptation of the classic story of Ebenezer Scrooge takes a very artistic look at the miser's transformation.

Violence B
Sexual Content A-
Profanity A
Substance Use B

For many families, A Christmas Carol by Charles Dickens is as much a part of their Christmas celebration as roast turkey or stockings hanging by the fireplace. Whether they read the novella or go to a play or watch a movie version, the tale’s message of hope and transformation is part of their holiday experience. The latest filmed version of A Christmas Carol remains true to the original story of a miser who undergoes a change of heart after spending time with four ghosts, but it is presented in a distinctive style that is unlikely to endear it to a mass audience.

There is just one question that will predict your response to this film: Would you want to watch a movie entitled A Christmas Carol - Interpretive Dance? The single weirdest part of this production is that most of the story is told by actors who don’t speak but use dance to express their emotions. That’s not to say the film is wordless; there is narration based on Dickens’ text and other actors speak the dialogue that is attributed to the dancing figures. Sometimes the dancing works – Marley’s visitation to Ebenezer Scrooge is rendered all the creepier as moans and howls punctuate his sinuous dance moves. But other scenes are disastrous: watching Scrooge dance his way out of an encounter with men fundraising for a charity is awkward. The Ghost of Christmas Present sways and slides in ways that just look odd, making scenes with him unnecessarily disconcerting. Less dance and more spoken word would make this film more accessible to audiences.

That said, this version of A Christmas Carol is obviously the result of a very clear artistic vision on the part of directors Jacqui and David Morris. Aside from the often incongruous dancing, the movie’s visual design is both unique and arresting. Dickens’ familiar tale is presented in a frame narrative wherein Victorian children are telling the story with paper cutouts which become a design element in the film. The sets look like elaborate paper designs and cut paper people are often used to illuminate ills of the age, be they poverty or workhouses. This is surprisingly powerful, giving Dickens’ messages about the evils of oppression and exploitation more heft. At times, words from the text scroll across dancers enacting their daily horrors as a prisoner on a treadmill or as a prostitute, and this reminds viewers that Dickens was a social reformer, campaigning against the abuses suffered by the poor of the Victorian era.

Despite its powerful themes of self-assessment and redemption, this movie is unlikely to find a large audience. For starters, it’s far too frightening for children. (They’re much better off with the Mickey Mouse version or the delightful Muppet production.) Adult devotees of the novella might be interested in this unusual adaptation but only if they truly enjoy the arts. The real audience for this show is people who go to The Nutcracker every year and who desperately wish that every Christmas story was told through dance. For them, this movie is the cherry on the top of the Christmas pudding.

Watch the trailer for A Christmas Carol (2021)

Violence:   There is frequent mention of ghosts and several are seen on screen. There are potentially disturbing images of people in workhouses. A doorknocker transforms into the image of a dead man’s face. A ghost covered in chains and with a bandage-wrapped face appears. A man is beaten and robbed. Children’s faces are overlaid with frightening faces. A woman mentions removing clothing from a dead man. A dead child is briefly seen lying in his bed.
Sexual Content: A scantily clad woman is seen with implications of prostitution.
Profanity:  None noted.
Alcohol / Drug Use: There is mention of ale and people drink what is likely alcohol at a party.

Do you think this adaptation is effective? Why or why not?

What leads to Scrooge’s change of heart? Were any of the things he saw more impactful than others?

For an extensive list of Christmas movies with a redemptive theme (including other versions of A Christmas Carol), check out our list here.

Related news about A Christmas Carol (2021) 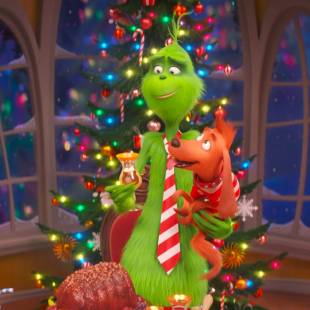