If your kids are clamoring for more stories about Santa Claus (or if you are trying to remind them of the importance of good behavior), any of these films will provide fun and festive family time. (This article has been updated since it was originally published in 2021.)

In The Christmas Chronicles and The Christmas Chronicles 2 Kurt Russell stars as the guy in the big red suit. The first film finds him caught by some wily kids who wanted to trap Santa – but the consequence is a broken sleigh and missing gifts. Now the three of them must save the holiday. Christmas is once again imperiled in the sequel, this time thanks to a bitter elf who’s trying to destroy the North Pole’s power source. Lighthearted and a bit loony, these films are fun for viewers of all ages. Netflix (PG, Grade: B+ for both)

Tim Allen stars with comic effect in The Santa Clause, (PG, Grade: B+) in which he accidentally knocks Santa off his roof. With Santa out of commission, he’s got to put on the red suit and finish the night’s deliveries. But putting on the suit has repercussions that go beyond one night’s work. In The Santa Clause 2, (G, Grade: B+) the new Santa learns that to keep his job, he’s contractually obliged to find a wife. The North Pole family keeps growing in Santa Clause 3: The Escape Clause. Disney+ (G, Grade: B-)

“Is Santa real?” This isn’t just a question for kids, in John Hughes’ remake of the classic Miracle on 34th Street, the matter makes it to court. The story features a department store Santa who’s firmly convinced that he is the real thing – and plenty of adults who don’t believe. Whether or not you’re a believer, this is pleasant family entertainment. Digital on Demand (PG, Grade: A-)

If you’ve ever wondered about Santa’s beginnings, the movies provide a variety of origin stories. Santa Claus – The Movie tells the tale of a childless couple who deliver gifts to children each Christmas, until they are caught in a blizzard and taken to a magical village in the North Pole. DVD (PG, Grade: B)

Klaus gives St. Nick yet another origin story, this one thanks to a frustrated postman. Exiled to a remote northern village, Jesper can’t return home until he gets the post office functioning. In desperation, Jesper persuades the village children to write to Klaus, a reclusive toymaker. Darker than most Santa films aimed at kids, this is nonetheless an intriguing addition to the Christmas movie canon. Netflix (PG, Grade: A)

Also set in Scandinavia is A Boy Called Christmas, another dark origin story for Santa Claus. In this tale, a widowed woodcutter sets off to find the magical kingdom of Elfhelm. When his son, Nicholas, finds a map to the fabled city, he goes in pursuit, hoping to help his father. Throw in a talking mouse, a flying reindeer, and a very angry elven ruler, and this film provides plenty of comedy and drama to keep viewers engaged. Netflix (PG, Grade: A-)

Even Santa can have family problems. Arthur Christmas introduces us to Santa, his retired father (Grandsanta), his wife and both of his sons. Steve, the older son, is a model of efficiency and has employed technology to make his father’s operation run like a well-oiled machine. Younger son, Arthur is a disappointment and isn’t trusted with any task more important than answering letters from hopeful children. But when a toy is left behind, it’s up to Arthur to save the day. Charmingly animated and punctuated by British humor, this is a jolly good film for viewers of all ages. Netflix (PG, Grade: A-)

In another look at the North Pole’s domestic challenges, Santa’s son is reluctant to follow in his father’s footsteps, to the point that he runs away just a few days before Christmas. His sister, who loves all things festive, sets off to find him in Noelle. Bright and cheery, this might just be able to coax you into a festive mood. Disney+ (G, Grade: B+)

Disgruntled by a sudden move to Belgium, Jules is in for a big surprise when he learns that his grandfather is the real Santa Claus. In The Claus Family, Jules realizes he’s going to have to help if all the gifts are to be delivered in time for Christmas. Netflix, (TV-G, Grade: B-). Jules takes over the big job and learns the limits of what Santa can do in The Claus Family 2. Netflix, (TV-G, Grade: B-)

Buddy is perfectly happy at the North Pole but he knows he doesn’t fit in with the other elves. When the head elf tells him the true story of his birth, Buddy heads off to New York City to find his father. It’s going to be a shock to discover that the rest of the world isn’t as cheery as his northern home…With its fish out of water premise, Elf delivers plenty of laughs. Digital on Demand (PG, Grade: B+)

Santa takes on action hero trappings in Rise of the Guardians. When the Bogeyman comes up with a plan to turn kids’ dreams into nightmares, Santa (a.k.a. Nicholas St North) works with the Easter Bunny, the tooth fairy, and the Sandman to keep nighttime safe. HBO Max (PG, Grade: B+)

Who doesn’t want to meet Santa? A number of kids get the chance to ride the luxurious Polar Express and see Santa before he embarks on his annual sleigh ride. Made with what was then cutting edge computer generated animation, The Polar Express shows its age but still tells a sweet story. Digital on Demand (G, Grade: A)

Blizzard follows the adventures of an empathetic reindeer who can feel the sorrow of a lonely girl. So concerned is she by the girl’s feelings that Blizzard breaks the North Pole’s rules and flies off to help her friend. This tender story of kindness and friendship is well suited to family viewing. Amazon Prime (G, Grade: A)

Apparently being one of Santa’s reindeer is a sought-after position in the animal kingdom. Living on a reindeer training farm, Elliot has always wanted to fly the magical sleigh. The only problem? He’s not a reindeer; he’s a miniature horse. Poor quality animation detracts from what is otherwise a kid-friendly story packed with positive messages in Elliot the Littlest Reindeer. Netflix, Crackle, Hoopla (PG, Grade: B+)

Although it isn’t really a Christmas movie, A Reindeer’s Journey will interest youngsters who are curious about reindeer. With its beautiful cinematography, stunning vistas, and generally peaceful storyline, this film will appeal to adults as much as their animal-crazy kids. Digital on Demand. (Unrated, Grade: A-)

Movies about Santa fall into naughty or nice categories, with the former being unsuited to family viewing. Fatman, which released this year is loaded with violence and profanity - not a surprise in a plot which involves a disgruntled child putting out a hit on old Saint Nick. Bad Santa and Bad Santa 2 are packed full of profanity and sexual innuendo. Krampus brings extreme levels of gore and horror to the festive season. Lumps of coal all around for these productions. 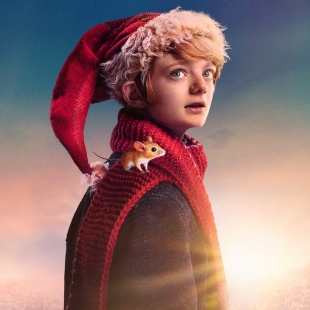 Over the mountains and through the woods to Santa's house we go. 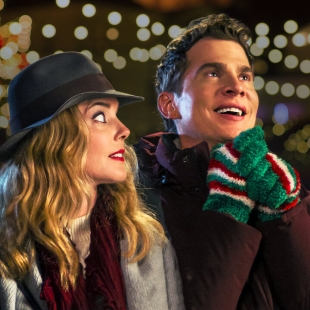 I Believe in Santa

Is he sweet or crazy?