It’s that time of year again when Hollywood looks back and decides which films get the coveted golden Oscar statuette. We’ve assembled a list of films nominated for the major categories, along with some we think the Academy of Motion Pictures Arts and Sciences overlooked in the nominating process. Who do you think will win on Sunday night?

Belfast. This loose biopic of director Kenneth Branagh is a well told, beautifully acted story about the power of family in troubled times. PG-13, Grade: B-

The Power of the Dog Part Western, part psychological thriller, this movie is all about tortured characters, dark motives, and stellar acting. Restricted, Grade: C

West Side Story This kinetic remake of the Broadway and film musical retools the Romeo and Juliet story of star-crossed lovers, setting the classic tale in 1950s New York City. PG-13, Grade: B-

Dune A sprawling, clever, stunning sci-fi epic, Dune is adapted from the classic novel of the same name by Frank Herbert. PG-13, Grade: B+

CODA The only hearing person in a deaf family, Ruby spends a lot of time interpreting – but her real passion is music, an interest her family will never be able to share. PG-13, Grade: C

Don’t Look Up As a massive asteroid hurtles towards earth, a team of scientists are trying to save the planet – but moving a disinterested political system towards meaningful action is nearly impossible. Restricted, Grade: C+

Drive My Car An emotionally devastated theater director who is required to have a chauffeur, and the two are forced to confront their difficult pasts together. This is the first Japanese film to be nominated for Best Picture. Not Rated. Not Reviewed.

Nightmare Alley In the dark corners of a travelling circus, an unscrupulous vagrant learns to be a mentalist, and soon finds himself performing in New York City – but every job has risks. Restricted, Grade: C+

Licorice Pizza A budding romance between a 15-year-old actor and a 25-year-old woman working for his school photographer has some predictable pitfalls, but focuses more on nostalgia for Los Angeles in the 1970s. Restricted, Grade: C-

Movies the Oscars Missed: We were surprised that these movies weren’t nominated for best picture: MASS, The Tragedy of Macbeth, The Green Knight. They all combine excellent writing and powerful acting and we think they should all have been contenders.

Kenneth Branagh, Belfast Branagh imbues his childhood memoir with warmth, even though it takes place during the Troubles. PG-13, Grade: B-

Ryusuke Hanaguchi, Drive My Car Hanaguchi tells an emotionally difficult story in a classic format – everybody loves a road trip. Not Rated.

Paul Thomas Anderson, Licorice Pizza While Anderson is no stranger to critical acclaim, this may not be an example of his best work. Rose-tinted fondness for his childhood shines through this quirky coming-of-age film. Restricted, Grade: C-

Missed Nomination: We can’t understand why Denis Villeneuve wasn’t nominated for his brilliant work in bringing the sprawling saga of Duneto the big screen.

Nicole Kidman, Being the Ricardos Kidman stars as iconic Hollywood redhead Lucille Ball, complete with all her drive, spunk, and wit.Restricted, Grade: C

Jessica Chastain, The Eyes of Tammy Faye Tammy Faye Bakker, wife of famous televangelist Jim Bakker, seems to have it all – wealth, fame, faith…but it doesn’t last. PG-13, Grade: B-

Olivia Colman, The Lost Daughter While on vacation in Greece, Italian lit professor Leda is forced to confront her own turbulent history as both a wife and mother. Restricted, Grade: D

Kristen Stewart, Spencer Stewart stars as Diana, once Princess of Wales, as she watches her marriage to Prince Charles begin to fall apart in a very messy, public fashion. Restricted, Grade: C-

Puzzling Omissions: While all the nominated performances are good, we think the ones the Oscars left out are even better. We don’t know why no nominations were given to Ann Dowd for MASS, Jennifer Hudson for Respect, or Sandra Bullock for The Unforgivable

Benedict Cumberbatch, The Power of the Dog As always, Cumberbatch delivers a compelling performance as Phil, the cruel and conflicted rancher at the heart of the movie. Restricted, Grade: C

Andrew Garfield, Tick, Tick…Boom! Concerned with his approaching 30th birthday and his inability to make a career writing for Broadway, composer Jonathan Larson is at a crossroads – either double down and write another play, or follow his girlfriend to the Berkshires and find other work. PG-13, Grade: B-

Will Smith, King Richard Smith offers a convincing portrayal of his complex and sometimes controversial title character. PG-13, Grade: B

Ariana DeBose, West Side Story With a ferocious love of life, Ariana DeBose dominates every scene she’s in, nearly stealing the film from the principal actors. PG-13, Grade: B-

Kirsten Dunst, The Power of the Dog Kirsten Dunst gradually falls apart in this film as her manipulative brother-in-law tries to destroy her marriage and her son. Restricted, Grade: C

Judi Dench, Belfast. As always, Judi Dench shines in a nuanced portrayal of a woman providing a family with love in troubled times. PG-13, Grade: B-

Troy Kotsur, CODA Kotsur plays a deaf fisherman, who wants the best for his musically-inclined hearing daughter, but also relies on her to help manage his business and interface with the hearing world. PG-13, Grade: C

Ciaran Hinds, Belfast Ciaran Hinds delivers one of his best performances in this story about the power of family in troubled times. PG-13, Grade: B-

Jesse Plemons, The Power of the Dog Playing a wealthy ranch-owner in Montana, Plemons brings honest sincerity to a story full of cruelty and deceit. Restricted, Grade: C

Belfast This loose biopic of director Kenneth Branagh brings his childhood experiences to the screen with bittersweet charm. PG-13, Grade: B-

King Richard This biopic is overlong but it tells a complicated story of parental love and control. PG-13, Grade: B-

Licorice Pizza A coming-of-age story with a strange relationship set in L.A. in the seventies from writer/director Paul Thomas Anderson. Restricted, Grade: C-

Don’t Look Up Capturing the existential ennui of living in a world with no regard for facts, the screenplay for Don’t Look Up juggles some very relevant ideas. Restricted, Grade: C+

The Worst Person in the World The third film in director Joachim Trier’s “Oslo” trilogy follows a med student in Oslo’s voyage of self-discovery. Restricted. Not Reviewed.

The Power of the Dog This much-nominated film started life as a 1967 novel by Thomas Savage before being retuned by director Jane Campion. Restricted, Grade: C

Dune It’s not easy to adapt a 400-page science fiction epic into a two-and-a-half hours, but Dune does it with surprising skill. PG-13, Grade: B+

Drive My Car This Japanese film is adapted from a short story by Haruki Murakami. Not Rated. Not Reviewed.

Overlooked by the Oscars: The Tragedy of Macbethis one of the best adaptations of Shakespeare’s classic tragedy. We can’t understand why it wasn’t nominated here.

Encanto The touching story of a magical family who all have incredibly superhuman gifts…except Mirabel. But Mirabel is just what the family Madrigal needs. PG, Grade: A-

Luca Even sea monsters have dreams! For Luca and his friend Alberto, those dreams involve living on land – and what better way to experience life on terra firma than exploring the Italian Riviera on a Vespa? PG, Grade A-

The Mitchells vs the Machines Taking an exciting road trip as a list-ditch effort to heal a rift in their family becomes even more exciting when a robot apocalypse breaks out. PG, Grade: B+

Flee An animated documentary for older viewers, this details the life of Amin Mawabi, who fled Afghanistan as a child and struggled to make it to Western Europe as a refugee. PG-13, Grade: A

Raya and the Last Dragon Although the land of Kumandra may be under threat from mysterious dark forces, they have a chance: An ancient and powerful dragon who could turn the attackers back…if only someone could find her. PG, Grade: A-

Missing Nominations: We are unsure why neither Vivo norRon’s Gone Wrongwere nominated in this category. Both offer engaging scripts, quality animation, and useful messages for young viewers. 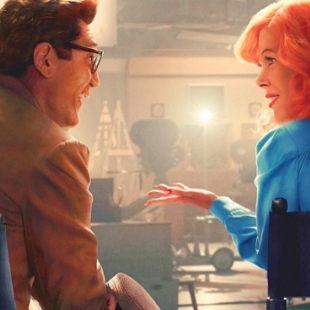 "Once in his life, every man is entitled to fall in love with a gorgeous redhead." Lucille Ball 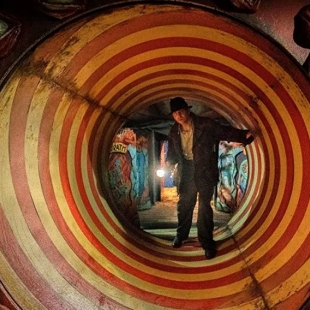 Magic, deception, or something far darker? 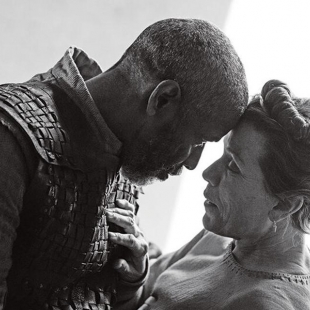 "Fair is foul and foul is fair." 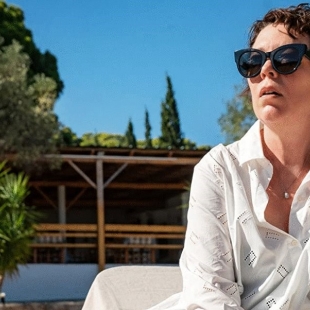 The past will come back to haunt you. 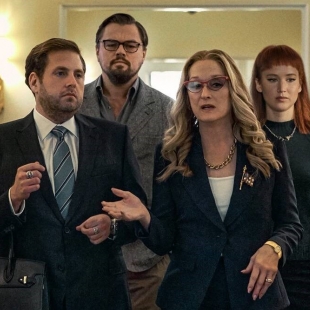 The sky is falling. For real. 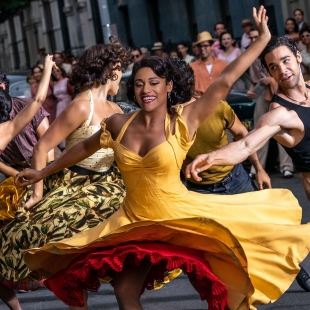 Shakespeare reimagined in 1950's New York, but with more singing.