This good-hearted family film pulls in a net filled with positive messages about acceptance, inclusion, education, and courage.

Disney+: Luca and Alberto are sea monsters with dreams of experiencing life on land. When they come out of the water, they assume human forms and explore the Italian Riviera while enjoying madcap adventures with a girl named Giulia.

Violence B
Sexual Content A
Profanity A
Substance Use A

Why is Luca rated PG? The MPAA rated Luca PG for rude humor, language, some thematic elements and brief violence

If you ever thought sea monsters enjoyed lives of mystery and excitement beneath the waves, think again. Luca (Jacob Tremblay) and his undersea family have a humdrum existence focused on herding fish, raising show crabs, harvesting seaweed, and avoiding “land monsters”.

Following in the fins of Ariel, Disney’s insatiably curious mermaid, Luca is fascinated by the world above the water – but thanks to his mother’s (Maya Rudolph) fearful warnings, he’s also terrified by it. When a rebellious fellow sea monster named Arturo (Jack Dylan Grazer) throws Luca onto the beach, the hesitant young ocean dweller assumes human form and guiltily falls in love with life as a land lubber.

Luca and Arturo enjoy halcyon days ashore, trying to build their own Vespa, the Italian motorbike that enthralls them. A trip to a nearby village introduces the boys to Giulia (Emma Berman), a girl determined to win the local triathlon and claim the cash prize. When the pals realize that cash can be turned into a Vespa, they persuade Giulia to let them be part of her triathlon team. But there’s a problem: neither of them knows how to ride a bike and they can’t swim without turning back into their scaly selves. And in a town where hunting sea monsters is a fabled occupation, that’s no small risk.

Luca is the latest feature film by Pixar, and it upholds the Disney studio’s reputation for animation. The village of Portorosso is lovingly rendered, with the golden charm that has led generations of tourists to fall in love with Italy. The ocean and sky are drawn with clarity and light, and few scenes are more magical than those where the two meet. Also well done are the transformations between human and sea monster as scales turn seamlessly into hair and skin and then back again.

As for the script, the quality is more variable. On the bright side, the humor is aimed straight at a young audience without the usual fart and butt jokes. On the downside, the story drags at times and doesn’t always have the magical feel that I expect from a Pixar film. That’s not to say that this is a bad film – it’s a fine choice for families – but Pixar has made such great films that “good” can feel like a bit of a letdown.

Luca is also good, if not great, in terms of negative content with the sole issue being a fair bit of plot related violence. Scenes of peril for sea monsters will upset sensitive kids, but are unlikely to be a problem for anyone else.

Thankfully, Luca is also awash in positive themes for viewers of all ages. The obvious one is an emphasis on not judging others based on the groups to which they belong. The villagers are terrified of sea monsters but once they get to know their aquatic neighbors, they learn to accept them. Young Luca learns about the wide world, and desperately longs to go to school, delivering an un-subtle message about the benefits of education. Arturo also gives Luca and young viewers a lesson about overcoming their fears (which he names “Bruno”) and yelling “Silenzio, Bruno” prior to doing frightening things. As long as this example encourages pushing through anxiety and not reckless risk-taking, it’s a great take-away from the film. With messages this strong, Luca could well be the catch of the day.

Watch the trailer for Luca

Why is Luca rated PG? Luca is rated PG by the MPAA for rude humor, language, some thematic elements and brief violence

Violence:   There are frequent scenes of peril involving sea monsters and humans with harpoons. There are several scenes involving fistfights with pushing and shoving included. A boy mentions the possible death of a lost fish. A fish spits out some small fish she has swallowed. A character makes vague reference to murders of sea monsters by humans. A youthful character is briefly frightened by someone dressed up as a deep sea diver. Boys have accidents with wheeled vehicles they have made. A character needs to be punched in the heart. A sea monster talks about whale carcasses floating around. Women hit boys with their purses. A man bullies children and tries to push one in a fountain. A man chops the heads off of fish.
Sexual Content: None noted.
Profanity:  None noted.
Alcohol / Drug Use: Boys are supercharged after drinking mugs of espresso.

Why are the villagers so afraid of sea monsters? Have any of them ever seen one? Have you ever heard frightening stories about people you have never met? Where do you think the stories come from? How can you find out if they are true?

Why does Luca run away from home? What motivates his parents’ behavior? How do you think they could have behaved differently to resolve their differences?

Ercole bullies Giulia and the boys relentlessly. Why does it take so long for the other kids and teenagers to stand up to him? What finally brings an end to his bullying? How can you help kids you know who are being bullied?

A sea monster and a girl become friends in the picture book Lula and the Sea Monster by Alex Latimer.

Kids have an undersea adventure in A Crack in the Sea by H.M. Bouwman and Yuko Shmimizu. This story bring sea monsters in contact with a boy who can speak to fish and twins with magical powers.

A scary undersea creature frightens people in Thomas Taylor’s Malamander. With a mythical half man/half fish and a gothic atmosphere, this story can give fun frights to older elementary readers.

Disney’s animated classic The Little Mermaid covers some of the same ground, including a main character desperate to leave her undersea life for the world of humans. In a live action mermaid story, Aquamarine follows the adventures of a young mermaid who washes ashore, longing to get land legs and find the man of her dreams. The Japanese anime production Ponyo features an undersea creature who wants to be human and finds a young boy willing to help her out.

A young boy finds a mysterious creature in Loch Ness and brings it home in The Water Horse: Legend of the Deep. Another lake “monster” brings a boy and his father together in Mee-Shee The Water Giant.

A young Polynesian girl follows her ancestors and has an adventure across the vast Pacific Ocean in Moana. A much sillier undersea adventure takes place in Atlantis: The Lost Empire in which a young mapmaker sets out to find the mysterious continent and save it from plundering explorers.

Scarier underwater adventurers for teens can be found in 20,000 Leagues Under the Sea, Percy Jackson: Sea of Monsters, In the Heart of the Sea, and The Meg. 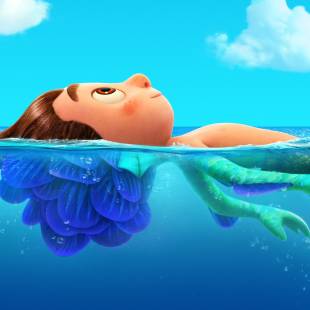