I know the story of Noah in the Bible is only about 40 verses long. And I know that making that short script into a two-hour movie means the filmmakers will have to fill in some blanks. But Director Darren Aronofsky’s Noah disregarded some seemingly basic elements of the story and set sail in a completely different direction than I expected—or maybe hoped for.

And according to Rotten Tomatoes, I’m not the only one that felt that way. While the film earned a 77% approval rate from critics, the ticket-buying audience was less generous with their applause, giving the movie only a 47% endorsement. But critics and the paying public aren’t the only ones at odds over the movie.

Even before the film released, the studio and director seemed to have a different vision. The Hollywood Reporter had this to say in regards to troubling feedback the production received at test screenings in New York, Arizona and Orange County, California:

“Sources say Aronofsky has been resistant to Paramount’s suggested changes. “Darren is not made for studio films,” says a talent rep with ties to the project. “He’s very dismissive. He doesn’t care about [Paramount’s] opinion.”

Taking on something as epic as Noah would be a daunting task for any moviemaker. Aronofsky, at least, was upfront about the direction his film would take. In an interview with The Telegraph, he described his adaptation as “the least biblical biblical movie ever made”.

Noah took top spot at the box office its opening weekend earning well over $43 million. Yet with growing controversy swirling around this watery tale, the trick will be to see if Noah can stay afloat for another successful weekend in theaters. 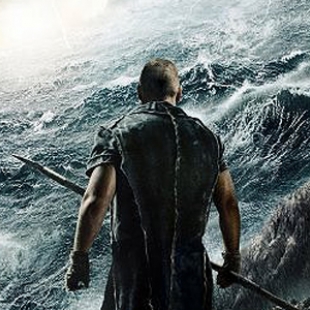 With bad weather in the forecast, Noah builds an ark to ride out the storm.