A Wrinkle in Time Parent Guide

This adaption of a best-selling novel will likely disappoint both newcomers to the story and fans of the classic.

Based on the classic children's novel, Meg (Storm Reid), her brother (Deric McCabe) and her friend (Levi Miller) are sent on an intergalactic mission to find her father (Chris Pine) who mysteriously disappeared while doing scientific research about time and space travel.

I went into the screening of A Wrinkle in Time with great expectations. The movie is based on a best-selling novel by Madeleine L’Engle that was one of my favorites as a youth, and one that I read to my own children. Although it was obvious from watching the trailer that the filmmakers were putting their own touches on the classic tale, I was open to seeing where that interpretation would go.

Directed by Ava DuVernay, whose other work focuses on African American themes (Selma, 13th), it should have come as no surprise that she would add racial diversity to what was originally an all-white story. While this casting pallet really doesn’t color the intent of the characters, the difference in agenda between L’Engle and DuVernay really does change the themes painted in the plot.

In the movie, Meg Murray (Storm Reid) is gifted student, yet struggling to deal with the disappearance of her dad (Chris Pine). Four years ago he vanished while experimenting with space and time travel. During his absence, her mother (Gugu Mbatha-Raw), who is also a scientist, has tried to keep hope for his return alive. But the mocking and bullying of her classmates has seriously injured Meg’s self-esteem. And when they also pick on her younger, brilliant brother Charles Wallace (Deric McCabe), she lashes out against the ringleader (Rowan Blanchard) by throwing a basketball at her face.

Two things happen at this point of despair: A smart and popular boy from school named Calvin (Levi Miller) shows up wanting to befriend Meg and Charles Wallace, and three ethereal beings (played by Reese Witherspoon, Mindy Kaling and Oprah Winfrey) appear offering to help the trio find Mr. Murray. After hesitantly accepting the invitation, Meg, her brother and their new pal find themselves wrinkling time, traveling through space, and on a dangerous rescue mission. The quest will challenge the talents and faults of each individual as they try to combat the dark forces of the universe.

The set-up is similar in both book and film, however, the lessons that are learned on the journey vary. L’Engle wrote an allegory that tries to balance science and religion, focuses on the bonds of family, and enshrines the strength of love. DuVernay and the screenwriters (Jennifer Lee and Jeff Stockwell) use her framework to promote girl power and reprimand fathers.

And it won’t just be fans of the novel that find the film lacking. The pacing is flawed, spending too much time frolicking in fantasy worlds, and not enough time building tensions and resolving conflicts. This makes it hard for the audience to engage in the emotions that should accompany scenes of peril, moments of triumph, depths of disappointment and realization of joy. Nor does it help that the other-worldly characters are so ham-fisted in imparting their moral messages.

Thankfully, content issues focus mostly on some non-graphic violent depictions that are best suited for older children and teens. Still, the greatest reason for regret in this expensive Disney production is the way an exceptional story, and a capable cast and crew, didn’t manage to iron out the wrinkles in their execution. Instead, all they have turned out is a mediocre adventure yarn.

Violence: Infrequent portrayals of verbal bullying and exclusion of a child at school. A child deliberately throws a ball at another child’s face. Within a fantasy context, children are in situations where they cannot trust adults, during this period an adult character convinces a young child to follow him, later the child exhibits changed behavior and is hostile toward others. Characters are thrown about by others who have metaphysical forces. Child characters are in peril and separated from parents. A child falls but is saved prior to reaching the ground.

Sexual Content: It is implied an adult female character is momentarily naked, no details are seen. A married man and woman kiss. Characters embrace.

Profanity: Some name calling is heard between children at school.

A Wrinkle in Time Parents' Guide

One message within this movie involves a father whose children feel he has been neglectful by putting too much time into his work. Within the context of this movie, do you feel this is a fair judgement? Can you think of other movies where fathers are depicted as being more interested in work than their children? Are there movies you can think of that depict mothers in a similar situation?

In the story A Wrinkle In Time, a “tesseract” is a means by which people can travel instantly through space. (In reality, the term tesseract describes a four-dimensional analog of the cube or “octachoron”.) The fictional idea plays with some actual theories in physics. If you want to dive into your own tesseract adventure – and don’t mind some deep reading – begin with this post on quantum entanglement by Ethan Siegel and the discussion of whether it can be used for “faster than light” (FTL) communications. (In short, it can’t.) Want more? Move on to Chad Orzel’s

“It was a dark and stormy night.” If you began your English paper with that sentence, you’d probably get a bad mark. But author Madeleine L’Engle still chose to begin her book, A Wrinkle In Time, with this overused cliché. Who was the first? It was English author Edward Bulwer-Lytton who penned the now-classic opening sentence in his novel Paul Clifford.

A Wrinkle In Time is a book that met many challenges to being published. It was still on the Top 100 Banned/Challenged Books list (check #90) at the American Library Association surveying the last decade (2000-2009). Many feel the book pits science against Christianity. Yet others feel the book has a faith-based origin and promoted religion. How do you feel about the book? (If you haven’t read it, we still feel it’s far better than this movie.) Is it healthy to have differences of opinion and perspectives?

This isn’t the first time A Wrinkle In Time has been put to screen. In 2003 a TV movie adaptation was made, and received poor reviews – including one from Madeleine L’Engle who said, “I expected it to be bad, and it is.” Artistically, we at Parent Previews felt the same way about this adaptation. Are some books best left to the reader’s imagination? Here are some reasons Devan Coggan at Entertainment Weekly considers it a difficult project to take on.

News About "A Wrinkle in Time"

Based on a novel from a series of books by Madeleine L'Engle.

As a youth and a mother, A Wrinkle in Time was one of my favorite reads. It tells the story of Meg Murry and her brother Charles Wallace who set off on a journey through time and space to find their father. Also on the quest is Meg's friend Calvin.

The three youngsters all have special abilities, and consequently often feel like misfits. Yet as they work together, with the help of three extra-terristial beings, they discover how to use their talents, when to accept their limitations, and what gifts are universally important.

In this movie version of the novel, the Murry family has been cast as a mixed-race. (Gugu Mbatha-Raw plays the mother, and Chris Pine the father.) Although that's not the case with the original tale, it will be interesting to see how that dynamic is incorporated into the script.

Storm Reid takes on the role of Meg, Deric McCabe is Charles Wallace and Levi Miller is Calvin.

The most recent home video release of A Wrinkle in Time movie is June 5, 2018. Here are some details…

This story features a group of exceptionally talent youth, as do Escape To Witch Mountain and its remake Race to Witch Mountain. Other characters dabble with time travel in Mr. Peabody & Sherman and Meet the Robinsons.

Related news about A Wrinkle in Time 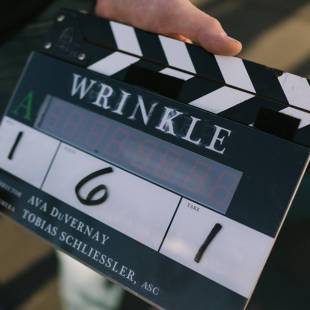 Production Begins on A Wrinkle In Time