Production Begins on A Wrinkle In Time

On November 2 2016 the movie A Wrinkle In Time began production in Los Angeles. The popular book of the same name was originally published in 1963 and has since sold 23 million copies. Ava DuVernay, a woman known for stepping out of her comfort zone, is the director. Her previous directing credits include the Oscar winning Selma, a bio-pic about Martin Luther King’s march from Selma to Montgomery Alabama in 1965. This year she’s turned to the documentary genre and created 13th, a film about a loophole in the protection of against slavery that’s already catching the attention of many critics.

Put simply, with credits like these there’s a good chance the movie version of A Wrinkle In Time will live up to its original legacy of being an intelligent adolescent novel that was ahead of its time. On the Random House website the books author, Madeleine L’Engle, describes her difficulties in bringing the story to print, citing both the perceived complexity of the story and that it featured a female protagonist in a sci-fi:

A Wrinkle in Time was almost never published. You can’t name a major publisher who didn’t reject it. And there were many reasons. One was that it was supposedly too hard for children. Well, my children were 7, 10, and 12 while I was writing it. I’d read to them at night what I’d written during the day, and they’d say, “Ooh, mother, go back to the typewriter!” A Wrinkle in Time” had a female protagonist in a science fiction book, and that wasn’t done. And it dealt with evil and things that you don’t find, or didn’t at that time, in children’s books. When we’d run through forty-odd publishers, my agent sent it back.”
From Penguin Random House Audio. Read more here…

Featuring Oprah Winfrey playing Mrs. Witch, Chris Pine as Dr. Alex Murry and young Strom Reid as the iconic Meg Murry, this movie will undoubtedly have a lot of attention coming its way while it works through the production process.

Fans of the book will notice some obvious changes between the novel and the planned production—simply by looking at the cast. This movie will depict the Murray family as a mixed race couple—Chris Pine plays the father and Gugu Mbatha-Raw stars as the mother, Dr. Kate Murry. When published in the early 1960s, the book challenged assumptions by having a teenaged female protagonist who was a genius in mathematics, who’s mother was also a brilliant scientist. It will be interesting to see if the color choices here will wrinkle any eyebrows. 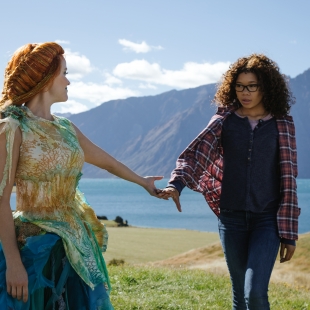 A Wrinkle in Time

Lost in time and space.