Although the film is bloated with the kind of high-tech special effects, the script maintains a steady pace of action and enough humorous quips to hold most viewers' attention.

After a homegrown terrorist threatens to destroy all the Federation stands for, and everything else in his wake, Captain James T. Kirk (Chris Pine) volunteers himself and the crew of The Enterprise to go after the powerful villain. It is an offer they will all soon regret.

Going to a Star Trek movie without being a trekkie is like going to your spouse’s Christmas office party. You know a little about the people you mingle with but not enough to appreciate the intricate details of office politics or players. While diehard fans will likely be thrilled with J.J. Abrams continuing story of the young Enterprise crew and their archenemies, the rest of us either have to do our homework before buying tickets or be content to be left out of the inside jokes and direct plot lines beamed up from previous movies or episodes.

It’s apparent Abrams intends to play homage to the original franchise. The movie opens with James Kirk (Chris Pine) and Dr. Leonard ‘Bones’ McCoy (Karl Urban) bolting through a red landscape that seems to be taken straight from the old television series that starred William Shatner as the headstrong Captain. The two men are fleeing from an army of white-faced, spear-throwing natives.

Staying just ahead of the angry mob, Kirk squabbles over his communicator with Spock (Zachary Quinto) who is censuring him for breaking the Prime Directive. (Starfleet’s General Order states there can be no meddling with alien civilizations.) Meanwhile Spock seems to be committing his own violation of the Prime Directive by interfering with the natural course of events. He has jumped into the belly of a bubbling volcano armed with a detonator designed to stop the volcano from erupting and annihilating the entire population.

Kirk’s lifelong attraction to a variety of female sexual partners is also established early in this film when he is caught in bed with not one but two human-like characters. But all the bedroom activity comes to a halt when Kirk and Spock are summoned to a meeting with Commander Pike (Bruce Greenwood) where they get to explain their differing reports on their recent mission. For the two young officers the resulting discipline is short-lived however when the Federation’s chief officers come under a gunfire attack in their own headquarters. When the culprit’s (Benedict Cumberbatch) hiding location is revealed, Kirk volunteers to take his crew and hunt down the criminal.

Meshing together a mixed bag of plotlines that include Spock and Uhura’s (Zoe Saldana) romance, Kirk and Spock’s bromance and the introduction of a new bad guy who threatens the safety of Earth makes for a complicated plot. But although the film is bloated with the kind of high-tech special effects expected in this fictional, futuristic world, the script maintains a steady pace of action and enough humorous quips to hold most viewers’ attention for the two hour ride.

However from the first hair-raising dash from natives to the brutal pummeling of several characters, Star Trek Into Darkness comes with an upped level of violence. While most of it remains bloodless, the death of scores of innocent victims, along with the frequent use of weapons and explosives push the amount of violence well past the staged fistfights of the TV series and even the mayhem of Abrams’ first Star Trek. And though Captain Kirk shows brief signs of maturing in his post, his cocky attitude ensures he remains completely at ease with breaking rules. Fortunately for him and his crew, his luck holds (something not every similarly-inclined viewer would enjoy) and the main team manages to sidestep death, setting themselves up for a long and prosperous life of adventure at the box office.

Violence: The film contains frequent depictions of non-graphic violence, explosions and gunfire exchanges along with portrayals of peril for numerous characters. Characters are shot, beaten and killed after being sucked out of their ship into space. Numerous officers are killed when a bomb is set off in an underground facility. Officers are gunned down. A man with bloody injuries dies. A woman slaps her father. A man’s head is crushed. Characters are brutally punched and kicked.

Sexual Content: A woman is seen in her underwear. A man is in bed with two women. Brief kissing (one involving alien tongues) and embracing are shown. Some mild sexual innuendo is included.

Language: The scripts includes nearly four dozen mild and some moderate profanities along with the limited use of slurs and some terms of deity.

Alcohol / Drug Use: At least two characters turn to alcohol to deal with disappointments. One is portrayed as drunk.

Kirk seems to think that the rules don’t apply to him. Does this contribute to his success? Are rules sometimes limiting? On the other hand how do rules protect individuals as well as society’s stability? What are the consequences, if any, that Kirk experiences for his behavior? How does Kirk’s attitude toward rules differ from Spock’s?

What drives Kirk to hunt down the man who attacked the Federation headquarters? Can anger or desires for revenge lessen a person’s ability to make sound judgments?

How does the Prime Directive influence the decisions and activities of the Enterprise crew? Do you have a “prime directive” that guides the decisions in your life?

The most recent home video release of Star Trek Into Darkness movie is September 10, 2013. Here are some details…

All of the packages include the following bonus featurettes:

- The Enemy of My Enemy

- Brawl by the Bay

This movie is the sequel to the 2009 film, Star Trek. The TV franchise has already inspired many movies, including: Star Trek 2: The Wrath of Khan (featuring the original Kirk and Spock - played by William Shatner and Leonard Nemoy) and Star Trek: First Contact, Star Trek: Insurrection and Star Trek: Nemesis (starring the Next Generation crew, with Patrick Stewart at the helm as Captain Picard). 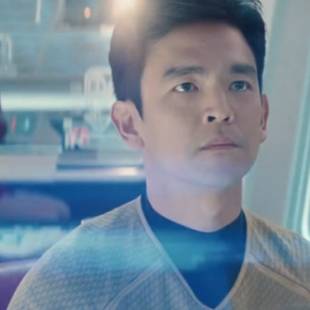 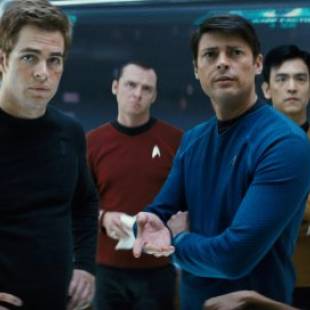