This battle of wits and ingenuity between the two fiercely proud foes will have viewers sitting on the edge of their seats.

Captain James T. Kirk (William Shatner), now an Admiral at the Star Fleet Academy, gets called back into active duty when the Federation receives word of a compromised top-secret science mission. But when he goes to investigate he finds an old foe with an ax to grind in this exciting, but often violent movie in the Star Trek family of films.

Violence C
Sexual Content B+
Profanity B-
Substance Use B

Every hero has his nemesis. In the case of James T. Kirk (William Shatner), his avowed enemy is a man he has almost forgotten.

Having gallivanted all over the universe, the former Captain has now climbed to the ranks of Admiral and traded in his Starship for a classroom full of eager Star Fleet recruits. But what he doesn’t know is his career path is on a collision course with his past.

Fifteen years previously, while in command of the Enterprise, Kirk and his crew discovered a space vehicle filled with hibernating humans from the twentieth century. Once revived, these genetically enhanced earthlings turned hostile. The twenty-third century space explorers had no choice but to deposit the unruly bunch and their power-hungry leader Khan (Ricardo Montalban) on a remote life-sustaining planet where they could work out their own social order. (The whole story can be seen episode 39 of the original Star Trek series entitled Space Seeds.)

When an unrelated science expedition accidentally stumbles upon this sleeping giant, his past grievances (real and imagined) are aroused. Using his superior intellect, Khan devises a plan to seek his revenge on the man who marooned them.

On the other side of the cosmos, Kirk’s routine inspection of the Enterprise is interrupted by an urgent but garbled message from Dr. Carol Marcus (Bibi Besch), an old acquaintance who accuses him of commandeering her top-secret science research. Biting at the chance to resume his former post, the Admiral gets Federation permission to take the starship’s staff of inexperienced cadets and investigate the situation. Completely unaware the communication is only bait on Khan’s hook, the over-confident space veteran is about to chew off more trouble than he can swallow.

The ensuing battle of wits and ingenuity between the two fiercely proud foes will have viewers sitting on the edge of their seats while the script boldly explores such concepts as the cost of revenge, the burden of regrets, and the gift of self sacrifice. But the fast-passed action, violence, depictions of bloody injuries, and plot surprises (along with a few profanities) make this classic sci-fi adventure a better choice for teens and adults.

Star Trek II: The Wrath of Khan was the second attempt at bringing the popular 1960s television series to the big screen. After critics panned the first film because of its extended panoramic shots of the refurbished Enterprise, it is a wonder the studio invested in the franchise again. Fortunately for the fans, this well written sequel and the incredible performance by Ricardo Montalban not only saved Gene Roddenberry’s brainchild, but also acted as the genesis for more movies and a whole new generation of Trekkies.

Overall: A- Kirk, now an Admiral at the Star Fleet Academy, gets called back into active duty when the Federation receives word of a compromised top-secret science mission. But when he goes to investigate he finds an old foe with an ax to grind in this exciting, but often violent movie in the Star Trek family of films.

Violence: C A lot of sci-fi violence such as explosions and weapon exchange between spacecrafts. Debris from damaged spacecraft falls on characters. Many characters sustain injury: death is implied and portrayed. Charred bodies, bloody wounds, fatal injuries and bloodstains are shown. The disabling and eventually fatal effects of a parasitic life form are verbally described before a character intentionally infects two other characters with the creature; Characters scream when the slug-like animal crawl into their ears. Character is determined to seek revenge despite pleadings from his companions to leave his grievances behind him. Torture and murder are mentioned. Characters scuffle and a knife is drawn during a fight. Characters are threatened with a phaser gun, and a creature is killed with one. Character shoots himself. Angry character grabs another. Character is exposed to fatal doses of radiation.

Sexual Content: B+ Aphrodisiacs are mentioned in passing. Some characters are scantily clad, showing the bare chests of the men and some cleavage of the women. The birth of an illegitimate child is discussed.

Language: B- Includes at least: 1 moderate and 13 mild profanities, 5 uses of deity as an expletive, and name-calling.

Alcohol / Drug Use: B Illegal alcoholic beverage is drunk at a birthday celebration. Character’s comment infers he is suffering from a hangover. Doctor discusses medications.

Miscellaneous Concerns: A character admits to cheating on a test.

This film inspired the script for Star Trek Into Darkness. Some of the more recent Star Trek movies are: Star Trek: Nemesis, Star Trek: Insurrection and Star Trek: First Contact.

The most recent home video release of Star Trek II: The Wrath Of Khan movie is August 5, 2002. Here are some details…

The Wrath of Khan is the beginning of a movie trilogy. To find out what happens after this story, check out Star Trek III: The Search for Spock and Star Trek IV: The Voyage Home.

When the Star Trek series was rebooted on an alternate timeline, another version of the Khan storyline was filmed. Starring Benedict Cumberbatch as the megalomaniacal Khan, Star Trek Into Darkness features fewer pecs but glossier special effects.

Related news about Star Trek II: The Wrath Of Khan 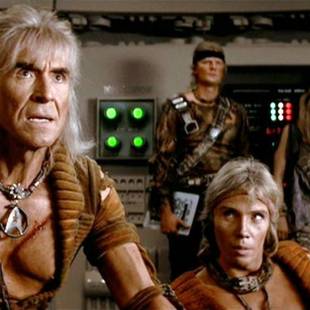