There are villains, monsters and magic. There are slapstick antics. And there is not much plot. Still, there are a few surprises -- they just aren’t very welcomed ones.

In this musical animation, the youngest of the seven dwarfs accidentally causes Sleeping Beauty (voice of Peyton List) to fall into an 100 year nap. So he and the other six pint-sized heroes set out on a quest to find the only thing that will wake her up -- the kiss of her true love.

Violence B
Sexual Content B+
Profanity A-
Substance Use A

The Seventh Dwarf is a German production featuring a blend of fairytales and familiar characters. Despite the title, the story is more about Sleeping Beauty than Snow White.

Princess Rose (voiced by Peyton List in the English language version) is about to celebrate her eighteenth birthday. That is a significant event because at the stroke of midnight she will be freed from a curse placed upon her by the evil Dellamorta when she was just a baby. (You know the one that says she will prick her finger and fall into an enchanted sleep for 100 years…) In honor of the big day everyone in the kingdom (except the sorceress, of course) has been invited – including the dwarfs.

Perhaps better called the seven stooges, the well-intentioned but not very bright midget men get tricked into bringing the wicked witch to the party and then blunder their way into causing Princess Rose to meet her slumbering fate. Although still more bumbling allows them to avoid being put in the same frozen stupor as the heir apparent and the rest of her guests (Snow White, Cinderella, Red Riding Hood etc.), the septet begins to feel bad about the havoc they have inadvertently caused. With heroic resolve Bobo, the youngest of the group, announces that he will save the Princess. Sharing the guilt, the other six agree to help him with his quest.

Knowing that true love’s kiss can undo the spell, the plan is to find Jack—the kitchen boy that holds Rose’s heart. Rumor has it that he is imprisoned in Dellamorta’s dungeon, which is guarded by her trusty dragon (voiced by Norm MacDonald). Too naïve to be as frightened as they should be, the dwarfs set off on the dangerous journey.

Much of what happens next is very predictable. There are villains, monsters and magic. There are slapstick antics. And there is not much plot. Still, there are a few surprises—they just aren’t very welcomed ones. Some of the depicted violence and moments of peril may be too frightening for young children (like when a boy is chained in a dungeon next to a skeleton, a menacing fire-breathing creature makes threats and a depressed soul contemplates suicide). The animators make the unusual artistic decision to draw Dellamorta scantily clad (occasionally revealing more anatomy than seems necessary, especially in a children’s movie) and a male walrus character shows off large nipples. And the production includes an assortment of awkward, rather uninspired musical numbers, including rap and tap dancing.

Added to this strange mix are nods to various other films (such as Star Wars, Jurassic Park and The Matrix). I suspect this is an attempt to amuse older audiences. The younger crowd is undoubtedly supposed to benefit from messages of friendship, teamwork and responsibility. Sadly, audiences are likely to feel they have already seen this idea before (take Shrek, Puss in Boots and Hoodwinked for example), and done better. So, while the inclusion of these themes may be appreciated, there likely just isn’t enough sugar here to make swallowing the rest of The Seventh Dwarf’s shortcomings enjoyable for either old or young.

Violence: The movie contains slapstick antics throughout. More serious violent portrayals include weapon use, magic curses (characters fall sleep or are frozen), falling and crushing. Characters are often in perilous situations. Some frightening images are seen. A scary witch, dragon and monster are depicted. A character contemplates suicide. A woman verbally abuses and threatens others. A character is put in handcuffs and suspended in a dungeon.

Other: Taro cards are used to predict the future.

In order to protect his daughter from danger, the King makes Princess Rose wear gloves and armor at all times. Does this keep her safe? What happens after she lets her guard down? Do your have safety guards in your life? What are they? What are they trying to protect you from?

From the Studio:
Join all seven dwarfs for an adventure as big as they are small! It’s the eve of Princess Rose’s 18th birthday. Everyone in the kingdom has come to Fantabularasa Castle to celebrate including Snow White, the Seven Dwarfs, Cinderella and Red Riding Hood. But just before the stroke of midnight Bobo, the youngest dwarf, accidentally pricks the finger of Princess Rose (a.k.a. Sleeping Beauty) with a cursed needle and sends the kingdom into a century-long slumber! To find Rose’s true love Jack to save her with a kiss, Bobo and the other six dwarfs must go on a treacherous journey, face a fiery dragon and outwit the jealous, scheming and evil witch, Dellamorta!
This hilarious mash-up of the best classic fairy tales for young and old alike, features a winged dragon, a brave little dwarf, non-stop laughs and toe-tapping songs! © The Shout Factory

The most recent home video release of The Seventh Dwarf movie is August 18, 2015. Here are some details…

The little people depicted here also star in Snow White and the Seven Dwarfs. Other fairytales that become part of this plot can be seen in the movies Sleeping Beauty, Hoodwinked and Cinderella.

Related news about The Seventh Dwarf 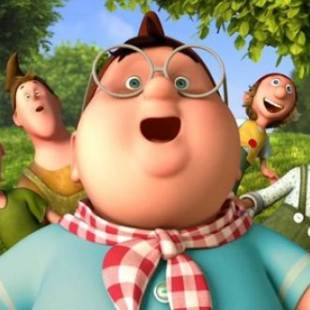