Pulling sympathy strings for the vulnerable Pete and the unlucky-in-love Nora, this 1977 Disney classic will likely continue to breathe charm on audiences for decades to come.

When a young orphan named Pete (Sean Marshall) and his pet dragon (voice of Charlie Callas) run away from an abusive foster family, they meet Nora the lighthouse keeper (Helen Reddy), her father Lampie (Mickey Rooney) and a whole lot of adventure! This Disney Classic also features a mix of live-action and animation.

Violence B-
Sexual Content A
Profanity A
Substance Use C

Pete (Sean Marshall) and his pet dragon (voice of Charlie Callas) are on the run. Having endured the verbal and physical abuse of a foster family with ulterior motives for adopting (which are tunefully explained in grand musical style), the orphan and his pal Elliot escape to the sleepy, seaside village of Passamaquoddy. Hoping to scout out the town without awakening suspicion, Pete admonishes his magical friend to keep out of sight.

Even though Elliot has the ability to turn himself invisible, the innocently mischievous dragon just can’t stay out of trouble. Engaging in silly pranks, he quickly draws attention to the 9-year-old boy who is just as quickly blamed for the resulting property damage, along with the indignity of pulling the petticoat off the local schoolteacher. And the problems only get worse when the firer-breather appears in his green and purple flesh to a drunken sailor.

Fleeing the angry mob, the homeless child fears he will never find a safe harbor. Then he’s spotted by a tenderhearted lighthouse keeper. Nora (Helen Reddy) befriends Pete and accepts his wild tales about an invisible dragon as the product of a lonely imagination. She even offers Pete a home and allows Elliot to stay nestled in a cave below the lighthouse.

The future is looking bright until Nora introduces the runaway to her father Lampie (Mickey Rooney) who turns out to be the inebriated man terrified by the sight of Elliot. When his prattling tongue convinces a sleazy snake oil salesman (Jim Dale) and his hapless assistant (Red Buttons) that there is a real dragon living in the neighborhood, the mercenary, self-titled Dr. Terminus decides to capture the elusive monster so he can use his body parts for medicine and make lots of money.

While the plot may seem rather melodramatic, and the musical interludes are sure to break the tension, there are still plenty of perilous moments to frighten young viewers. These include depictions of dragon hunters with nets and harpoons, as well as the Grogan family spouting threats of bodily harm and plots of kidnapping. Another concern for parents may be the portrayal of drinking (several scenes are set in a tavern) and frequently intoxicated main characters.

Yet the production has heart. It pulls on sympathy strings for the vulnerable Pete and the unlucky-in-love Nora. It playfully shows Elliot’s protective intentions as the animated dragon interacts with the live-action cast. And the emotional rendering of Helen Reddy’s song Candle On The Water garnered the movie with an Oscar nomination. Released in 1977, Disney’s Pete’s Dragon will likely continue to breathe its charm on audiences for decades to come.

In this animation/live-action mix, a young orphan relies on an oft-invisible dragon to be his best friend. Scary-looking adults and angry townsfolk verbally threaten (with great detail) a child with violence and chase him. Slapstick-style comedy depicts property damage and people being knocked over or run down and falling into sticky substances. Kidnapping (and dragon-napping) is attempted. A character is stuffed in a sack, while others are trapped in nets and tangled in ropes. A harpoon cannon is used to try and kill a character. A boy is accused of pulling off a woman’s petticoat (the article of clothing is shown). A boy is seen in his underwear. A child is disciplined at school with a dunce cap and lashes to his hand. Characters purposefully misrepresent products that they are trying to sell. Men sing about catching a dragon and cutting up his body (with some graphic lyrics) for parts that will be used for making medicines. A potion for early puberty is used as a bribe, and stud fees are mentioned. Many main and background characters are shown drinking in a tavern. Main characters are frequently depicted as intoxicated, and their drunken actions are played for comedy. A dragon also tastes alcohol, and then burps fire that singes a couple of men. Sailors are shown in peril during a storm at sea.

In this story, Nora tries to help Pete be more “realistic” about his belief in Elliot. What not-so-realistic thing is Nora hanging onto? While the movie is make-believe, what kinds of dreams or imaginary hopes might people sometimes cling to? Can these things be helpful or hurtful when facing life’s challenges?

The song There’s Room For Everyone encourages acceptance of all kinds of people—and dragons. What things can you do to include others who may seem different or unusual?

The most recent home video release of Pete’s Dragon movie is October 16, 2012. Here are some details…

To celebrate its 35 Anniversary, Pete’s Dragon will be releasing on Blu-ray, as a Blu-ray/DVD Combo Pack.Bonus extras include:

Pete’s Dragon flies onto DVD with scales of bonus features. Learn about the technical inventions that made it possible for an animated dragon to play with a child in a live-action movie in Brazzle Dazzle Effects: Disney’s Movie Magic (narrated by Sean Marshall, the star of Pete’s Dragon,). See the deleted storyboards for a sequence called Terminus & Hoagy Hunt Elliot. Hear the original song concept for Boo Bop Bopbop Bop -I Love You, Too.

Other bonus materials include:

- Original Demo Recordings (Audio Only) of Brazzle Dazzle Day” and Every Little Piece, along with the deleted song The Greatest Star of All.

- Promotional Pop versions (Audio Only) of It’s Not Easy, Brazzle Dazzle Day and There’s Room For Everyone, along with the Academy Award nominee for Best Song, Candle On The Water.

Other youngsters who have befriended dragon-like creatures can be found in The Water Horse: Legend of the Deep and Mee-shee The Water Giant. Don Bluth, the director of animation for this movie, went on to start his own company and produced The Secret of NIHM andAn American Tail. 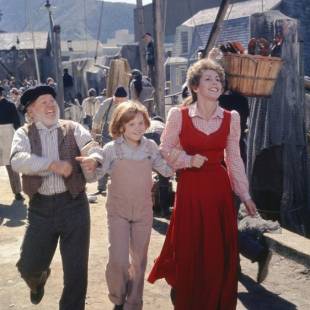