It's impossible to take a Biblical account this well known and create a film that will please everyone. For many, the violence may drown what little scriptural meat is offered.

The biblical story of Noah (played by Russell Crowe) makes a big splash on the big screen. The movie recounts his prophetic decision to build an ark to protect his family, along with the Earth's animals, before God sends a global flood.

Violence D+
Sexual Content B-
Profanity B+
Substance Use C

Possibly the biggest complaint an audience will make about a movie based on a book is their disappointment when the director’s interpretation doesn’t match their own vision. Those who approach this film with some knowledge of the original story may also leave wondering if director (and co-writer) Darren Aronofsky was reading from the same pages.

In his version, Noah (Russell Crowe) is a peaceful man who lives his life completely in accordance with the will of “The Creator.” He roams the barren mountains looking for vegetation to feed his wife Naameh (Jennifer Connelly) and and three sons Shem, Ham and Japheth (Douglas Booth, Logan Lerman and Leo McHugh Carroll). They, along with his grandfather Methuselah (Anthony Hopkins), are the last of the line of Seth, one of Adam’s sons. The rest of the Earth is populated with hoards of descendants from Cain, another son of Adam, who committed the world’s first murder. Playing on the premise that evil begets evil, these people are bloodthirsty carnivores led by Tubal-cain (Ray Winstone). During the first few minutes of the movie, this warrior-like villain kills Noah’s father, believing now all of Seth’s posterity are extinct.

When Noah and his family are discovered, they are forced to flee from the ferocious Cainanites. But Noah finds bigger fish to fry than his family’s survival when he is shown, through a drug-induced vision courtesy of some ancient potions cooked up by Methuselah, that The Creator is planning to flood the world and destroy all the evil people. And that leads him to the film’s ultimate visual showpiece: Building an ark.

With the help of his wife, sons, an adopted daughter they saved as a child (Emma Watson) and some friendly rock monsters that are actually fallen angels covered in hardened lava (I’m not joking…) they get the boat project built just before the rains fall. At about this same time Tubal-cain and his masses realize there’s only one ship leaving port and they are determined to be on board. It leads to a huge battle that quickly depopulates the cast of extras, with the rock monsters throwing and tromping most of the aggressors, and providing Noah and his crew a chance to get afloat.

At this point there is still close to an hour left in this biblical epic. Time enough for Noah to tell his family (and us) what The Creator’s ultimate plan is. It certainly is a literal interpretation of Genesis and asks for everyone to eventually pay the ultimate sacrifice. Again Noah is determined to demonstrate complete obedience to God. The problem is, other than the aforementioned drug induced vision, we see very little evidence that this man, who is referred to as a prophet in Genesis but never within this movie, ever speaks with God.

Religious perspectives aside, there are other reasons you may not want to sail into these choppy waters with children in tow. Violence occurs throughout, with blood effects. There are depictions of countless people being thrown, beaten, pummeled and stabbed. Scenes show parents attempting to sell their children for undisclosed reasons. While this takes place in darkness, which obscures the details of what’s happening, it will nevertheless still be scary for young viewers. A couple of brief sexual interludes occur (with no details or nudity) and Noah uses mysterious potions to keep the animals asleep for months.

Of course it’s impossible to take a Biblical account this well known and create a film that will please everyone. For many, the violence (while somewhat justified) may drown what little scriptural meat is offered in this movie. That leaves Noah barely floating at C-level for family viewing.

Why is Noah rated PG-13? Noah is rated PG-13 by the MPAA for violence, disturbing images and brief suggestive content.

Violence: The image of a man killing his brother with a rock is repeatedly shown. A child watches as his father is murdered in front of him. Frequent scenes show hand-to-hand combat, along with the use of swords, spears and other weapons. Characters are beaten, stabbed and impaled. Blood is seen dripping from a weapon after a man is killed. Graphic and realistic bloody injuries are shown. A child has a serious sword injury that later makes her barren. Animals are killed and chopped apart. A wild dog is shown with an arrow in his leg. A character is caught in a bear trap and later run over by a mob of people. Characters are shown with blood splattered over them. Several scenes of corpses or bodies floating in the water are seen. A man threatens to kill a child with a knife. Frightening monsters (that resemble Transformers) are depicted, along with other nightmarish imagery. Characters are engulfed in flames. Explosions are depicted.

Sexual Content: A boy and girl engage in a sensual moment in the woods. In another scene she aggressively kisses him and begins to remove her clothing. Later, she announces she is pregnant. Couples kiss on several occasions. A partially naked drunk man is shown on a beach.

Alcohol / Drug Use: A character has a “revelation” after being drugged. Animals are put to sleep with a specially concocted smoke (and remain asleep for many months). A man is depicted as a drunkard.

The movie shows the seven days of creation, along with the Adam and Eve story. How does the depiction of evolution in this sequence differ from the Biblical account of events? The rock warriors (that look like Transformers) are not mentioned in the Bible either. Nor is the sleep-inducing smoke that makes the animals slumber indefinitely. And missing from the script is the fact that Shem, Ham and Japheth all had wives. Are theses, and other departures from the original text, meant to make the story more engaging? Does the inclusion of this artistic license work, or does it become a distraction for people who are familiar with the Bible?

This movie doesn’t include any use of the word God, even as a profanity. Why do you think the director choose to avoid terms of Deity in a biblical story?

Noah becomes increasingly unstable as the story goes on. Is there any indication in the Genesis that God believes all mankind is bad and wants them destroyed so only animals inhabit the earth? Why is Noah unable to see the good in his sons? What is Noah’s wife willing to do for her children?

Learn more about the universal nature of the flood story and read the biblical account of Noah in Genesis chapters 6 trough 9.

Learn more about the inspiration for the character Tubal-cain.

The most recent home video release of Noah movie is July 29, 2014. Here are some details…

Biblical stories are making a comeback! For example, The Bible: The Epic Mini Series and The Nativity Story. Past epics based on the Good Book include The Greatest Story Ever Told and The Ten Commandments. The story of Noah was also given a comical retelling in Evan Almighty. 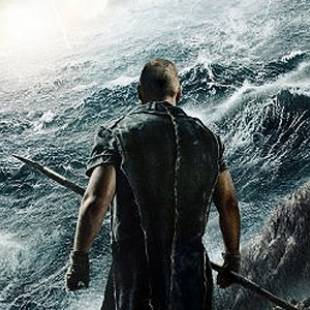