Despite the to-be-expected shortcomings, "The Bible: The Epic Mini Series" does live up to its name.

Stories from The Bible are brought dramatically to life in this 2013 made-for-TV mini series, produced by the husband and wife team of Mark Burnett and Roma Downey.

Violence C-
Sexual Content B
Profanity A-
Substance Use A-

The History Channel presents The Bible: The Epic Miniseries, a five-part drama beginning March 3, with an episode airing each Sunday until it wraps up on March 31, 2013—Easter Sunday.Then the whole package releases to home video on April 2, 2013.

While stories from the Bible have received plenty of Hollywood attention in the past, this one ambitiously tries to cover the entire behemoth in ten hours. Needless to say not everything from Genesis to Revelation is covered. Nor should someone unfamiliar with this collection of holy writings feel like watching this series will give them a definitive comprehension of what Jews or Christians purport to believe.

Like all scripts based on books, this one uses creative license and interpretation. Depending on the audience member’s personal views and understanding, this may at times contradict or disappoint. (For instance, guardian angles that wield swords like action figures, mysteriously-cloaked very-mortal-looking messengers of God and the decision to cast actors of various racial ethnicities in some of the roles.)

Yet despite those to-be-expected shortcomings, The Bible: The Epic Mini Series does live up to its name. It is epic and it does dramatize many of the stories contained in the Old and New Testaments. Narrated by Keith David it covers the ark being tossed upon the waters of the flooded Earth to the exodus of Moses, through the amazing defeat of Goliath by David to the remarkable survival of Daniel in the lion’s den, and the birth of Christ, his crucifixion and resurrection. The production team has created a realistic sense of time and place. Great visual effects and strong performances also add to this impressive adaptation.

Of course there are portrayals of violence, sexual misconduct and natural disasters—because The Bible contains accounts of all of the above. Many of the battle sequences and murders are depicted with blood and may be too realistic for some viewers (both young and old). Sexual relations (like those between Sampson and Delilah, or David and Bathsheba) are mostly just implied, with clothed embracing, or bare back and shoulders.

Treating the material with respect, the well-crafted re-enactments should appeal regardless of religious denomination. However, the focus on the most visually exciting elements of the text means there is little opportunity to portray or ponder the spiritual messages that are supposed to attend these accounts.

While this massive undertaking may miss the mark in providing faith-promoting experiences, it definitely does offer a starting point for further discussion. It could be fun as a family to looking up the scriptural passages of each dramatization and compare its accuracy. You may want to speculate why some stories are told while others are omitted. (There’s a really big jump between Abraham and Moses. Why did the scriptwriters choose to leave out Isaac and Jacob, and how Israel came to dwell in the land of Egypt in the first place?) Most importantly, you will want to consider why the lives of these people have been preserved in scared writ. What are the moral messages we are supposed to learn from their triumphs and mistakes?

Although it will never replace the real thing, The Bible: The Epic Mini Series does do a wonderful job of reminding us of the wealth of interesting information packed into those 1000-or-so pages. Playing well to a larger-than-expected TV audience, perhaps the greatest miracle will be the series’ potential to motivate many to dust off the cover and crack the pages of this remarkable book.

Violence: Depictions of battle: swords, knives, slings and arrows are used as weapons. Killings, corpses and crucifixions are shown and the depictions often include blood. Many people are in perilous situations. Death threats and executions occur.

How do you feel about The Bible? What is its worth as a history? As holy writings?

What does it teach about God and his dealings with people? What moral lessons can be learned from the behavior and consequences of others?

Learn about the history of The Bible here:

The most recent home video release of The Bible: The Epic Mini Series movie is April 2, 2013. Here are some details…

The Bible: The Epic Mini Series re-releases to home video in a Christmas Edition. The box set features a new cover, but the contents inside are the same as the Easter release on 2 April 2013.

The Bible: The Epic Mini Series is releasing to home video in a 4 Disc Blu-ray set.Extras include:

- The Cast of the Bible

Other adaptations of biblical stories include: Cecil B. DeMille’sThe Ten Commandments  and The Prince of Egypt (both recount the life of Moses), as well as Joseph King Of Dreams (the son of Jacob/Israel who was sold into slavery in Egypt), One Night With The King (Esther), The Nativity Story (about the birth of Jesus) and The Gospel of John (a dramatization of the Book of John found in the New Testament). Fictional tales set during the life of Christ have also come to the big screen, such as The Robe and Ben-Hur.

Related news about The Bible: The Epic Mini Series 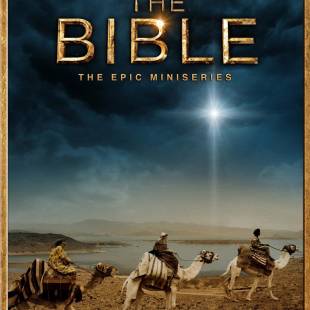 Re-release of The Bible: The Epic Mini Series - October 2013