"Mandela: Long Walk to Freedom" is a powerful obituary.

In this bio-drama, Idris Elba plays Nelson Mandela. The film explores Mandela's extraordinary life accomplishments on his long walk to bring freedom to the indigenous people of South Africa.

My local screening of Mandela: Long Walk to Freedom opened with a moment of silence. It seemed fitting as Nelson Mandela died only hours earlier (on December 5, 2013).

The movie begins in the rural village where Mandela was born and depicts the traditional ceremony inducting him into manhood. Shortly afterwards he leaves home to face the broader world. Trained as a lawyer, he defends his clients in a judicial system whose outcomes are tilted towards the interests of the white South Africans who have created an apartheid state. But increasingly he senses a brewing unrest among his fellow black South Africans who demand the power to control their own lives.

However power can be dangerous, no matter who holds it. In the hands of the South African prison guards, power becomes a catalyst for yelling, bullying and demeaning acts including forcing the prisoners to strip down and stand in the rain. When wielded by the white South African electorate, it perpetuates a system of continual economic and political marginalization of most of the country’s citizens. And in the hands of the angry black majority, it unleashes acts of retaliation, riots, demonstrations and bombings.

When members of the anti-apartheid African National Congress approach Nelson Mandela (Idris Elba) he initially hesitates to join their ranks. He has a new wife, Evelyn, (Terry Pheto), and a young family. But the lure of the political movement eventually draws him in, pulling him farther and farther away from his family. After he is involved in an adulterous relationship, his wife Evelyn leaves with their children. Then, only a short time later, he meets and marries Winnie Madikisela (Naomie Harris).

Based on Mandela’s autobiography, the film is over two hours long. It covers seven decades from his childhood to his inauguration as South Africa’s first black President. For the most part the movie paces well with strong performances from Elba, Harris and others. It highlights events surrounding the forced segregation of apartheid and the escalating violence that lead to Mandela’s arrest and 27 years of imprisonment on Robben Island and in other prisons.

Patience and unrelenting resolve prove to be Mandela’s greatest traits as he evolves from protester to militant subversive and then to peace promoter. But his life is not without its dark moments. While the film portrays some of the terrorist acts committed by the ANC, including bombings, riots, and dousing people in gasoline before setting them on fire, it neglects to address several other aspects of the anti-apartheid struggle and the organization’s communist ties. In later years, it is Winnie who is portrayed as the aggressive and embittered attacker spurred on the violent acts, while time appears to have tempered Mandela’s approach. Instead of fighting, he is canny, if not elusive, in his negotiations with members of F.W. de Klerk’s government. In the film, it is his strong moral resolve that eventually changes a nation—but at a huge personal cost to the imprisoned man who is unable to raise his children, maintain his marriage or even attend the funerals of his mother and son.

News footage and re-enactments fill in the details for those unfamiliar with the historical events. Although the story is based on facts, the scenes of riots, bombings, shootings and bloody attacks are too intense for most younger teens and children.

However Mandela: Long Walk to Freedom is a powerful obituary. And at his death, it is likely many North Americans will remember Mandela as the man who professed, “No one is born hating another person. People must learn to hate, and if they can learn to hate, they can be taught to love, for love comes more naturally to the human heart than its opposite.”

Violence: Numerous scenes include beatings, gunfire, car burnings, dead bodies and bloody injuries. A man is arrested and beaten until he dies. A woman is accused of stealing from her employer. A woman accuses her husband of adultery. He responds by yelling and knocking her to the floor. Police open fire on a crowd of protesters, killing men, women and children. Blacks are forced into segregated neighborhoods. Characters blow up businesses and government buildings. A man is killed in one explosion. They use gasoline to start fires. Prisoners are shoved, yelled at and intimidated. A man makes crude comments about another man’s wife in order to start an argument. A tortured man’s screams can be heard. A woman is dragged from her home at night, beaten, stripped naked and imprisoned for many months. Characters throw rocks at soldiers. A man accused of being a traitor is chased and burned alive by his own people. Soldiers are engulfed in flames. Riots break out in the streets resulting in dead and injured characters.

Sexual Content: Laws forbid interracial relationships. Several brief sexual scenes include passionate kissing and undressing involving married and unmarried couples. A woman comments that a man has “lots of girlfriends.” A married woman is photographed with another man.

Language: The script contains some strong language including racial slurs and vulgar expressions, name-calling, profanities, scatological slang, cursing and a handful of other profanities.

Alcohol / Drug Use:Several characters, including Mandela, smoke and drink. A group of drunken prison guards force their prisoners to strip down and stand outside in the rain.

What things do the warden and guards on Robben Island do to humiliate the prisoners? Why do Mandela and the other black prisoners request long pants instead of shorts? What derogatory terms do the guards use? How are intimidation and humiliation used against the prisoners? How does Mandela’s relationship with some of the guards change over time? Why does it change? Why does Mandela refuse to let the young boys at his home make crude gestures at the guards?

While Nelson and Winnie are both arrested and imprisoned, how do they react differently to their suffering? Does Winnie’s role as a mother make it more difficult for her to be away from her children? Can a person choose whether he or she becomes bitter to such treatment? How do their reactions impact their marriage? What does Mandela mean when he says, “I love who she was, but we change over time”? What does Winnie mean when she says, “We have both been alone too much”?

How does Mandela’s measured approach differ from the young militants who are later imprisoned on Robben Island?

Read more about these pivotal events and places in South African history:

This film portrays Mandela as the hero of the anti-Apartheid movement. How might white South Africans who lived during the uprisings view this movie differently? How might the other contemporary leaders of the ANC feel about their role in the story?

Nelson Mandela’s autobiography, "Long Walk to Freedom", chronicles his life through his imprisonment on Robben Island to his election as South Africa’s first black President.

Invictus is based on a book by journalist John Carlin entitled "Playing the Enemy: Nelson Mandela and the Game That Made a Nation".

"Cry the Beloved Country" is set in South Africa during the rise of apartheid. Written by Alan Paton, it follows Reverend Stephen Kumalo as he searches for his son Absalom.

Readers with an interest in the history of American racism should check out Frederick Douglass' "Narrative of the Life of Frederick Douglass, an American Slave" or Solomon Northup's "12 Years a Slave", both of which detail the brutalities of life in slavery, and the systems which propped up that institution.

The most recent home video release of Mandela: Long Walk to Freedom movie is March 18, 2014. Here are some details…

- Mandela: The Leader You Know, The Man You Didn’t

Nelson Mandel is also depicted in the movie Invictus. He is used as an inspirational figure in Akeelah and the Bee The struggle for equal rights is not limited to South Africa, and examples of American films dealing with racial discrimination and political action include Selma, Lee Daniels’ The Butler, and Lincoln. Twelve Years a Slave and Harriet both depict the evils of slavery in the decades before emancipation. 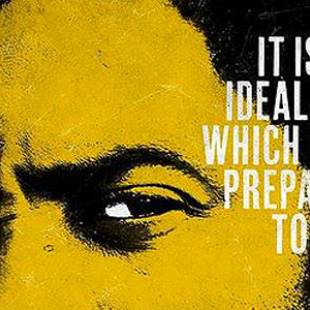 Mandela’s Long Walk to Freedom Is Over