This film comes with plot holes the size of a rodeo arena. But even all of those seem small compared to the story's contradictory messages.

Despite falling in love, an aspiring artist (Britt Robertson) can't quite imagine how she could ride out a life with a rodeo star (Scott Eastwood), until an elderly man (Alan Alda) shares some relationship advice.

Violence B
Sexual Content D+
Profanity B-
Substance Use C+

Trust Nicholas Sparks to make the gritty and hard-hitting world of rodeo look romantic. In this latest adaptation of a Sparks’ novel, Sophia Danko (Britt Robertson) is a college senior in her last semester of an art history degree. Then she’s off to New York City for an internship in a prestigious gallery. But one weekend her roommates at the sorority (where everyone looks like a Victoria’s Secret model) drag her away from her studies to a rodeo. In a matter of minutes the studious, citified schoolgirl has fallen in love with bull rider Luke Collins (Scott Eastwood).

While she’s quick to warn Luke she’s headed to the Big Apple, that doesn’t stop her from going out with him or hopping into his bed. By keeping a rein on the violence and language content, scripts based on Sparks’ books have a reputation for getting away with some of the steamiest sex scenes allowed in a PG-13 movie and this one is no different. The film includes several scenes of sexuality, some with partial breast and buttock nudity.

For many viewers, this blatant parade of naked bodies and casual attitudes about sex will be a deterrent to the rest of the story, which actually has something positive to say about long lasting relationships. In contrast to the depiction of the lusty coupling is the romance of Ira and Ruth Levinson (Jack Huston, Oona Chaplin).

Sophia befriends the elderly Ira (Alan Alda) after she and Luke rescue him from a car accident on a dark and rainy night. And it is he who tells her the narrative of his love affair with his now deceased wife Ruth through flashbacks and letters. In the 1940s they endured the separation of WWII, infertility and different personal interests that required sacrifice for the sake of love. The result of their commitment is a tender and caring bond.

Ira tries to explain that to Sophia when she begins to think she and Luke come from two completely incompatible worlds. Unfortunately, in this highly sentimental tale, there is never a question that Luke and Sophia won’t get together. And the characters’ controlled world manages to steer the young pairs’ circumstances so they miss out on the very lessons that strengthened Ira and Ruth.

The film also comes with plot holes the size of a rodeo arena. Unable to have children, Ira and Ruth try unsuccessfully to adopt. That seems like a stretch in a post-war time known as the Baby Scoop Era when millions of children were looking for homes. And while cowboys may be some of the toughest competitors in the world, Luke’s career stopping contusion, and his subsequent injuries, make it highly unlikely he could continue to make his mark on the circuit.

Still all of that seems irrelevant when compared to the story’s rather contradictory message. Although the script preaches “love requires sacrifice… always,” that seems to apply only to the older generation. If the film’s finale is to be believed, it would appear young adults now need to have their life dreams fulfilled—right away—in order to be happy.

Violence: A man sustains bloody head injuries in a car accident. A participant in a rodeo event is chased by a bull and suffers head and facial injuries, as well as being knocked unconscious. Some depictions of warfare and weapons use are depicted. Bloody injuries are shown when soldiers are shot. A couple argues briefly.

Sexual Content: The movie includes several steamy, premarital sex scenes from the 1940s and the present. They include couples undressing or lying in bed. Partial breast and buttock nudity are seen in one prolonged shower scene. Some brief sexual comments and innuendo are included.

Language: The script contains less than a dozen mild and moderate profanities, including terms of Deity and some scatological slang.

Alcohol / Drug Use: Characters are frequently seen drinking in bars, at social events and at home. A secondary character at a party is drunk. A man takes pills to deal with pain.

The cowboys in this movie are covered in logos. While professional athletes are wear the brands of his/her sponsors, what other product placements do you see in this movie? What organizations are promoted?

Staying on a bull for eight seconds is only part of the score in bull riding. Here are the other requirements. What is the rider judged on? What is the bull judged on?

What hardships or obstacles do Ira and Ruth face during their life? How do they learn to deal with disappointments and setbacks? What challenges do Luke and Sophia endure? What, if any, sacrifices do they make for the long-term success of their relationship?

Nicholas Sparks often uses letters in his plots. What is romantic about handwritten correspondence versus email? How has letter writing changed since the Internet? When is the last time you sent someone a letter? Do you have letters/cards you have kept because of their sentimental value?

Actor/director Clint Eastwood is the father of Scott Eastwood. What family resemblances do they share? Is it an advantage or disadvantage to a young actor to have a famous parent in the industry?

More About The Movie: This movie is based on the novel The Longest Ride by Nicholas Sparks.

From the Studio: Based on the bestselling novel by master storyteller Nicholas Sparks, THE LONGEST RIDE centers on the star-crossed love affair between Luke, a former champion bull rider looking to make a comeback, and Sophia, a college student who is about to embark upon her dream job in New York City’s art world. As conflicting paths and ideals test their relationship, Sophia and Luke make an unexpected and feateful connection with Ira, whose memories of his own decades-long romance with his beloved wife deeply inspire the young couple. Spanning generations and two intertwining love stories, THE LONGEST RIDE explores the challenges and infinite rewards of enduring love. © Twentieth Century Fox

The most recent home video release of The Longest Ride movie is July 14, 2015. Here are some details…

Other Nicholas Sparks’ novels that have been made into movies include: Dear John, The Best of Me, Safe Haven and The Notebook.

Related news about The Longest Ride 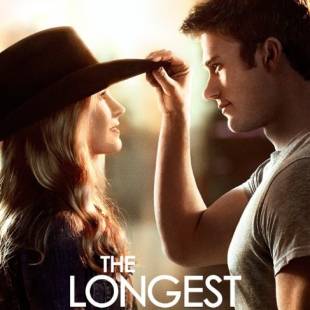