I can sense fingers poised over keyboards right now telling me to "lighten up, it's only a children's movie." But I think kids deserve better.

An unlikely friendship forms between a young girl (voice of Rihanna) and a socially awkward alien (voice of Jim Parsons) after her world is invaded by his species looking for a new home.

Violence C+
Sexual Content A
Profanity A-
Substance Use A

Why is Home rated PG? The MPAA rated Home PG for mild action and some rude humor.

Children’s movies are notorious for having heavy-handed messages aimed at their young audiences. In the case of Home it’s all about accepting yourself, flaws and all, and learning to live with people that are different from you. I wouldn’t have a problem with either of those missives if I didn’t feel like they were being forced upon me by a group of plundering extraterrestrials that have taken over Earth.

The Boov are a group of pint-sized aliens that change color more often than chameleons, only their rainbow range is triggered by a rollercoaster of emotions. After being threatened by another species, the frightful and fearsome Grog, the Boov abandoned their own planet. And it appears the cowardly lot has been chased around the galaxy ever since. Rather than trying to resolve their differences, the Boov hightail it out of Dodge for another location every time they sniff even a whiff of trouble. Now the Boov, who have worse diction than Jar Jar Binks, storm Earth. First they suck up all the people and relocate them to an undisclosed location (where they will live in manufactured suburbs complete with amusement parks and fast food joints) and then the Boov move into humans’ homes.

Oh (voice of Jim Parsons) is one of those aliens who settles into in a recently evacuated high-rise apartment. He decides to embrace the human tradition of a house warming party and sends an email to everyone in the universe, including, by mistake, the Grog. Putting the Boov’s mortal enemy on the invite list is the latest slip-up in a long streak of blunders that has put Oh on the bad list. And this time the Boovs’ leader, Captain Smek (voice of Steve Martin), can’t overlook the gaffe. So he puts out an all-points bulletin calling for Oh’s arrest.

While on the run, Oh stumbles upon Tip (voice of Rihanna), a young girl who managed to avoid being abducted by the alien machines. This gutsy, recent immigrant to America and her pet cat have commandeered the family car and are on a mission to find her missing mother (voice of Jennifer Lopez). Not surprisingly (if you’ve seen the trailer) Tip and Oh join forces in an effort to avoid capture and track down the parent. Ultimately, the purpose of this adventure, which includes plenty of non-graphic cartoon-style violence, is to allow the two misfits to learn more about one another and become friends.

Yet along with the story’s gibberish and potty jokes, the aliens’ captain engages in plenty of ridiculously silly antics, like wearing orange peels on his feet and a barbeque on his head. The Boov, on the other hand, are a mindless bunch of conformists who only act or think when ordered to by the Captain.

I can sense fingers poised over keyboards right now telling me to “lighten up, it’s only a children’s movie.” But I think kids deserve better.

The call for tolerance has become increasingly pervasive and, in some cases, even virulent in our society. However real tolerance isn’t something that can be legislated or hammered into a person. It comes from the heart when people learn to truly value the worth of others. I’m not sure if a 94-minute children’s movie about multi-legged extraterrestrials that oust an entire population of passive humans out of their homes is the best way to engender that lesson. Rather I have to wonder if tolerance and acceptance could be better taught by adults who are kind to the grocery clerk, polite to the bus driver, helpful to a neighbor and less consumed with road rage.

Why is Home rated PG? Home is rated PG by the MPAA for mild action and some rude humor.

Violence: The movie contains portrayals of non-graphic violence including characters hit over the head with a scepter. One character appears to be knocked out. Others are punched, smashed, slapped and threatened with an alien weapon. A character appears to be crushed under a huge, metal machine. Humans are sucked up into large machines and relocated by aliens. A character is trapped in a refrigerated cooler. An underage driver crashes a car. A character is tied up in a car with duct tape. Characters also experience moments of peril, sometimes in a slapstick context.

Sexual Content: A character is seen with a bra draped across her head at a dance party.

Other: The film contains several jokes about bodily functions and other bathroom humor.

Talk about the movie with your family… When the aliens begin to move into her home, Tip has just a few minutes to escape. What items does she throw into her backpack? How were those items helpful later? What things would you take if you had only a few minutes to decide? What things might you want to have with you in case you were unable to return home?

Both Oh and Tip feel like they don’t fit in. Have you ever felt that way? Are there likely other people who share those emotions? What can you do to reach out to others?

How do the Boov express their feelings? Would it be easier to tell how a person was feeling, or if he or she was lying, if people also turned different colors? What are some ways that humans express emotion?

When the Boov arrive they get rid of everything they feel is useless—like bikes, umbrellas, garbage cans and toilets. What items does our society value that might not be important to others?

Oh makes a lot of mistakes that bother or even endanger the other Boov. But in the end, he saves them from danger. How can we learn to appreciate people who may be different from us? Is it possible to focus on their good qualities instead of their mistakes?

SPOILER: At the end of the movie the humans and the Boov get together for a party at Oh’s new apartment. Where do you think the original owners are? Do you think they are happy about being forced out of their home? How would you feel about being relocated by someone who wanted to take over your house?

The movie Home is based on a children’s book The True Meaning of Smekday by Adam Rex.

From the Studio: When Earth is taken over by the overly confident Boov, an alien race in search of a new place to call home, all humans are promptly relocated while all Boov get busy reorganizing the planet. But when one resourceful girl, Tip, manages to avoid capture, she finds herself the accidental accomplice of a banished Boov named Oh. The two fugitives realize there’s a lot more at stake than intergalactic relations as they embark on the road trip of a lifetime. - Written by DreamWorks Animation

The most recent home video release of Home movie is July 28, 2015. Here are some details…

This film shares some of the same creative talent as the movies The Croods and How to Train Your Dragon. Another child befriends an alien lost on Earth in ET: The Extra-Terrestrial. 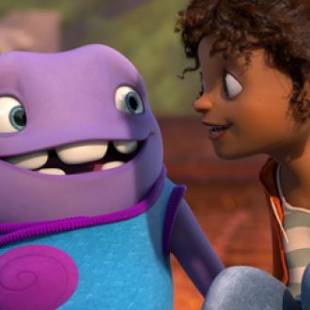