How To Train Your Dragon Parent Guide

"How To Train Your Dragon" is a delightful story. Once the characters in this film are willing to remove the scales from their eyes, they can enjoy a new, high-flying approach to life.

Hiccup (voice of Jay Baruchel) is already a bit of a disappointment in his Viking community, but the teen is in danger of being cast out when he turns from the tribe's tradition of dragon slaying, and instead tries to tame one of the mythical creatures.

All of us likely have a blind spot or two when it comes to seeing others or ourselves. And it is no different for Stoick the Vast (voice of Gerard Butler), the beefy, bearded leader of a small Viking village. His son Hiccup (voice of Jay Baruchel) is a scrawny boy with more brains than brawn. While his size is disappointing enough, Hiccup also appears to be totally useless when it comes to fighting dragons. And slaying the scaly creatures is an important skill for the inhabitants on the Island of Berk. They are constantly attacked by fire-breathing beasts that swoop down and carry off their sheep and any other edible item they can catch.

Determined to find the dragons’ nest and destroy it, Stoick and the other Viking warriors set sail in their ships. Meanwhile, the peg-legged Gobber (voice of Craig Ferguson) agrees to stay back and start training a new generation of dragon slayers, including Hiccup.

In an enclosed instruction ring, Hiccup and the other teenaged trainees—Fishlegs (voice of Christopher Mintz-Plasse), Snotlout (voice of Jonah Hill), the siblings Tuffnut and Ruffnut (voices of T.J. Miller and Kristen Wiig) and Astrid (voice of America Ferrera)—come face to face with a variety of the winged animals that are eager to devour the novice warriors.

But before showing up for his first day of class, Hiccup comes across an injured Night Fury, the most elusive and clever of the flying critters. With a little bit of patience, he attempts to tame the stealthy beast. The encounter allows the boy to see the frightening creatures in an entirely new light and gives him some unusual advantages during the teens’ training sessions. However, Hiccup knows his father will be devastated if he fails to kill one of the captured dragons—especially when the whole town turns out to watch the young combatants flaunt their newly acquired fighting techniques.

Like many other parent-teen relationships portrayed in film, the one between Stoick and the motherless Hiccup suffers from some communication problems. Luckily though, the story, based on a book by Cressida Cowell, allows their interactions to happen without a lot of unnecessary attitude issues.

Although the script contains only a smattering of mild language concerns, some moments of peril may be unsettling to younger viewers, especially when a swarm of dragons descends on the tiny town and starts the homes on fire. Some of the townsfolk are injured during the kafuffle. Others experience scary moments during training exercises, and several scenes of weapon and hand-to-hand violence are shown as well.

Still How To Train Your Dragon is a delightful story about learning to see things from another being’s perspective. Once the characters in this film are willing to remove the scales from their eyes, they can discard their old traditions and enjoy a whole new high-flying approach to life.

Watch the trailer for How To Train Your Dragon

Characters are forced to defend their homes against a host of fire-breathing dragons that start buildings on fire and carry off animals. During the battle, characters are hit, tripped or injured. One man is hit in the head with a weapon. One character threatens to kill a dragon with a knife. A dragon is hit in the eye, another has his tail catch on fire and one crashes into the ground causing a large explosion. Characters are chased by dragons on several occasions. Dragons fight one another. Teens squabble among themselves. A girl punches a boy on the arm. Two characters lose limbs and have them replaced with prosthesis. A comment is made about a female Viking’s breast armor. A girl kisses a boy on the cheek.

How To Train Your Dragon Parents' Guide

Why do Stoick and Hiccup have such a difficult time communicating? How does that impact their ability to see one another’s point of view?

Does understanding another person’s motivation make it easier to appreciate their choices or decisions?

How To Train Your Dragon is based on a book by Cressida Cowell.

This is an adaptation of a series of 12 children’s books by Cressida Cowell, about the adventures of Hiccup, a young viking, and his small dragon, Toothless.

Eragon, by Christopher Paolini, is the story of a young boy who finds a mysterious blue egg in the woods near his home, and the danger and excitement it brings to his life.

Cornelia Funke’s Dragon Rider focuses on Firedrake, a dragon searching for a new home when his family is threatened by human construction. He is aided by a young human boy named Ben, a brownie named Sorrel, and a homunculus called Twigleg. But they are pursued by a massive golden dragon, who seems intent on consuming all of the other dragons…including Firedrake!

Jessica Day George introduces us to the spunky Creel in Dragon Slippers. Creel is left to be taken captive by a dragon, in the hopes that she’ll be rescued by a prince. Instead, Creel befriends the dragon and winds up saving the kingdom.

The most recent home video release of How To Train Your Dragon movie is October 15, 2010. Here are some details…

How to Train Your Dragon releases to home video on October 15, 2010 in three versions:

How to Train Your Dragon (Single DVD Disc Edition) offers:

- Featurette: Behind the Scenes with the Cast and Filmmakers.

How to Train Your Dragon (Double DVD Pack) includes:

- Build Your Own 3D Dragons

How to Train Your Dragon (Two-Disc Blu-ray/DVD Combo + Dragon Double Pack) comes with all the extras found in the Double DVD pack plus:

- Game: Legend of the BoneKnapper Dragon

This animated film, which can be seen in 3D in select theaters, was produced by the same studio (DreamWorks) that created Shrek, Madagascar and Kung Fu Panda. Another father and son experience communication problems in Cloudy With a Chance of Meatballs.

Other tales that include human relationships with dragons are The Water Giant: Legend of the Deep, Pete’s Dragon and Eragon.

Related news about How To Train Your Dragon 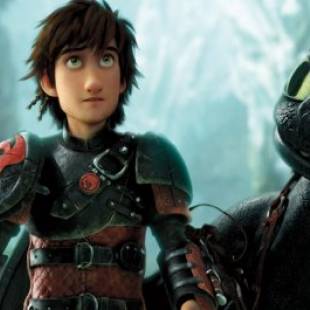