Given Disney's ability to create convincing and lovable rodents, it's no surprise that this squirrel superhero has so much charm.

Disney+: When Flora adopts a squirrel she names Ulysses, she has no idea that he is going to develop superpowers.

Violence B
Sexual Content A-
Profanity A
Substance Use A-

“All superheroes come to us with a purpose,” explains 10 year old Flora Buckman (Matilda Lawler), “to save those in need. But they all have one thing in common. They never show up in the real world.” Flora’s expertise in the spandex-clad world of superheroes comes from her father (Ben Schwartz), an aspiring comic book artist with a fertile imagination and zero commercial success. Neither of them realize that they have a limited view of life’s possibilities – and they are going to be surprised when a furry little superhero enters their lives…

Pursued and hoovered up by a rogue robotic vacuum cleaner, a squirrel somehow absorbs some of the machine’s artificial intelligence. Rescued by Flora, the little critter, who she names Ulysses, learns to read, type, compose poetry, and develop some unexpected powers. As his unusual abilities strengthen, Ulysses seeks his purpose, while acquiring an unexpected adversary….

When not evading his antagonist, Ulysses observes and aids Flora’s family. Beaten down by their literary failures, her parents have separated. Their discouraged, angsty examples lead Flora to embrace cynicism with the mantra “Do not hope. Only observe.” But when a squirrel starts flying, how can you not hope for other unlikely dreams?

With Flora & Ulysses, Disney presents the holy grail of family movies – a story kids will love and adults won’t hate. There’s lots here for kids to enjoy, particularly the frequent scenes of comic mayhem caused by the remarkable squirrel. As for adults, there are enough wry jokes to provide unexpected laughs and a story that provides positive messages without becoming too syrupy. The movie leans hard into themes of emotional resilience and connection as well as the importance of families and the need for kindness and neighborliness. Adapted from Kate DiCamillo’s Newbery Medal winning novel of the same name, Flora & Ulysses is a reminder that good material is the best foundation for a successful film.

Thankfully, the movie’s fun comes with little in the way of downsides, except for preschoolers who might be frightened by scenes of minor violence. Frankly, the part of the film I found the most unsettling was the character of Flora’s friend, William Spiver (Benjamin Evan Ainsworth). The traumatized boy suffers from “hysterical blindness”, which he assures Flora will eventually be cured. I appreciate that William isn’t treated like a saintly, fragile, Tiny Tim character. But I am uncomfortable when his blindness is used for laughs, especially trip-and-fall scenes and times where his attempts to “echo-locate” become comic fodder. I’m not entirely sure if the movie is laughing with William or laughing at him and that’s an important distinction for children to grasp.

The rest of the film, however, is delightful. Matilda Lawler shines in the lead role, with authentic emotions and a real chemistry with Ulysses, whose computer generated personality is a solid achievement by Disney’s tech wizards. It’s easy to suffer from superhero fatigue; to say that there are too many caped crusaders in the cinematic universe already, but when you watch Ulysses typing his poetry or sharing his candy treat, it’s impossible to wish him away.

Watch the trailer for Flora & Ulysses

Violence: There are repeated scenes of mayhem and property destruction accidentally caused by a squirrel. A squirrel gets sucked into a vacuum cleaner. There is mention of a hamster being hit with a pan. A squirrel gets tangled in a woman’s hair. A man shoots darts at a squirrel shaped target. A cat attacks a man, clawing him and tearing his clothes. A cat bites a man’s finger. There are frequent scenes of people and animals being shot with tranquilizer darts. An accident knocks the door off a car. There is mention of a child falling out of a car. A child discusses having pushed a car into a lake. A character punches a man in the face.
Sexual Content: There is brief mention of a naked superhero. There are pictures of romance novel covers. A young girl jokes about being pregnant. A man and woman kiss.
Profanity: None noted.
Alcohol / Drug Use: Tranquilizer darts make a man act dopey.

If you were a superhero what power would you like to have? What would your purpose be? Who would you help?

This movie is based on Kate DiCamillo’s beloved novel, Flora & Ulysses. Ms. DiCamillo is also the author of The Tale of Despereaux, The Miraculous Journey of Edward Tulane, Because of Winn-Dixie, The Magician’s Elephant, and The Tiger Rising.

Other films adapted from Kate DiCamillo’s books include Because of Winn-Dixieand The Tale of Despereaux.

Rodents come to the fore in G-Force, which tells the tale of guinea pigs who have been trained as secret agents.

A young boy has adventures with his imaginary polar bear friend as they try to become private eyes in Timmy Failure: Mistakes Were Made.

Dog Daysfollows personable pooches as they make the world better for their owners and other people around them. 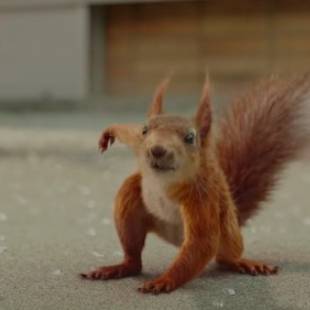