Unlike graphic war films, "The Book Thief" is one that parents can quite comfortably share and discuss with their tweens and teens.

Liesel Meminger (Sophie Nélisse) becomes a book thief while living in Germany during WWII. The young girl finds a welcome release in the written word, and shares her escape with those closest to her, including a Jewish refugee (Max Vandenburg) hiding in her home.

Violence B-
Sexual Content A
Profanity B
Substance Use B

The Book Thief is told from two perspectives—that of Death and a young German girl named Liesel Meminger. In this pre-WWII Germany setting, the Führer is rising to power, inciting the nation to war and beginning his ethnic cleansing. Death knows what is coming; Liesel (Sophie Nélisse) does not.

But by the time Liesel arrives at the home of her foster parents on Heaven Street she’s already been through hell. She watched as her younger brother died in her mother’s arms and was buried in a shallow, frozen grave. Then she was unceremoniously left at the home of Rosa and Hans Hubermann (Emily Watson and Geoffrey Rush), never to see her mother (Heike Matatsch) again.

The only reason given for Liesel’s placement is a whispered rumor that her mother is a Communist, a dirty slur in Hitler’s Germany. The youngster is understandably withdrawn when she arrives. And Rosa, a sturdy, ill-tempered woman can’t be bothered with the girl’s timidity. However Hans takes a gentler approach, kindly welcoming the frightened child into their home and building a bond between the two of them.

A short time later, the Hubermanns open their door to another refugee. Max Vandenburg (Ben Schnetzer) is a young Jewish man on the run. His father saved Hans’ life during WWI and now the boy is seeking protection from the family. Knowing the risk they are taking, Hans and Rosa hide Max in their dark basement and swear Liesel to absolute secrecy.

Liesel takes comfort in her new family. As well she is befriended by Rudy Steiner (Nico Liersch), a blond-headed boy from next door, who idolizes runner Jesse Owens and is always asking for a kiss. But after Hans teaches her to read, she finds solace and power in words. Unfortunately, as the title suggests, Liesel doesn’t come by most of her books honestly. Nor does she suffer any consequences for her thievery. One of her favorite places to “borrow” from is the home library of the Mayor’s wife, Ilsa Hermann (Barbara Auer).

While many other films relate the events of WWII, this one is unusual because it tells the story from the eyes of a German child, not the Jewish refugee, the soldiers or the advancing Allies. Compared to those other movies, The Book Thief is also a sanitized script with only brief depictions of war actions, the beating of Jews, vandalism and some schoolyard bullying that leads to a fistfight. Even corpses pulled from bombed buildings look more like peacefully sleeping bodies than victims of violence. And the script contains only a handful of profanities along with Rosa’s derogatory nickname for Liesel.

The film does provide a sense of everyday life for many Germans during Hitler’s reign—those who supported him and those who had to hold their tongues. And, unlike graphic war films, The Book Thief is one that parents can quite comfortably share and discuss with their tweens and teens.

Violence: Scenes of war violence are shown including bombing raids, explosions, burning and destroyed buildings and an injured man. Several corpses are shown (none are bloody or have discernable injuries). A boy’s nose begins to bleed as he dies. Several characters are bullied. A girl violently punches a boy and gives him a bloody nose after he taunts her.

Sexual Content: A boy asks a girl to kiss him on several occasions.

Language: The script contains a few terms of Deity and one mild profanity along with repeated name-calling.

In this story many of the characters have to make difficult without knowing what the outcome will be. What effect does Hans refusal to join The Party later have on him? Why do people choose not to express their real feelings or thoughts? Why does Rudy’s father tell him to stop idolizing Owens? What ideas and groups did Hitler want to cleanse from Germany?

Why does Hans tell Liesel that a person is only as good as their word?

What sacrifices do Rosa and Hans make for others? Despite her abrasive exterior, how does Rosa show affection? How does Hans exhibit his own humanity? How does Liesel emulate her father’s concern for others? What does she do in the bomb shelter to help calm others?

This movie is based on The Book Thief, a novel by Markus Zusak.

The most recent home video release of The Book Thief movie is March 11, 2014. Here are some details…

The Book Thief releases to home video (Blu-ray/DVD/Digital Copy) with the following extras:

- A Hidden Truth: Bringing The Book

Books are both a best friend and a feared enemy to the characters in Inkheart. The horrors of WWII are slowly revealed to another youngster in The Boy in the Striped Pajamas. A group of school children try to understand the magnitude of holocaust in the documentary Paper Clips.

Related news about The Book Thief 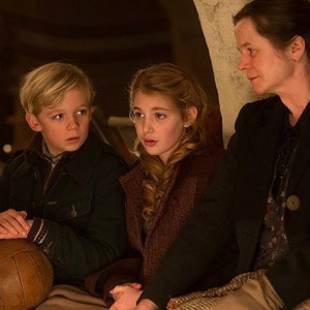