The Boy in the Striped Pajamas Parent Guide

Eight-year-old Bruno (Asa Butterfield) befriends an unusual kid about his age (Jack Scanlon) living on the other side of a fence behind his home. But what the innocent child doesn't realize is that The Boy in the Striped Pajamas is actually a Jewish youngster being held in a concentration camp overseen by Bruno's father, a Nazi Commandant (David Thewlis).

Violence C+
Sexual Content A-
Profanity A-
Substance Use C+

In 1940s Berlin, eight-year-old Bruno (Asa Butterfield) enjoys a simple life full of playtime with his chums until he is informed that his military father (David Thewlis) has received a promotion requiring the family to move to the country.

Bruno’s sorrow over having to say good-bye only increases after he arrives at the cold, grey stone residence. The first rule of their new house is he must stay within its fenced front yard. Although he follows these orders for a time, the incredible yearning to find a companion his own age (along with a curiosity about a "farm" he can see from his bedroom window), drives the boy to explore the woods in the back of his home.

Arriving at the enclosure, he discovers another eight-year-old living on the other side of the electrified boundary. Shmuel (Jack Scanlon) is covered in dirt and wearing what Bruno believes to be striped pajamas. Too innocent to understand the truth of their situation, the German and Jewish youngsters begin a friendship through the barbwire. While Bruno is busy secretly bringing gifts of games and food, his father becomes further entrenched with his official duties as the commander in charge of the extermination camp. Meanwhile his mother (Vera Farmiga) remains unaware of what is really happening at the compound and why its large chimney is constantly belching a putrid smoke that billows overhead.

A purely fictional account of what it might have been like to be the child of a Nazi Commandant during the Holocaust, this movie tries hard to present a new angle on this horrific piece of history. Obviously, it deals with some disturbing topics. This is usually done verbally to avoid showing visually explicit images, but there are still plenty of suspenseful and perilous situations. For example, a Jewish man who works as a servant in a German household is beaten (off screen) and dies from his injuries. In another scene, people are ordered to disrobe (no explicit nudity is shown) before they are herded into a “shower room” and gassed to death. And because the audience has had the opportunity to emotionally bond to these characters, these abuses are upsetting even without graphic depictions.

Other content concerns are minimal and include the use of a mild profanity and a single term of deity as an expletive, a young teen girl who is enamored with a Nazi soldier, as well as the portrayal of social drinking.

Parents and educators should be forewarned that the story ends with a bit of a twist, so they will want to preview this movie through to its conclusion prior to deciding whether or not to present it to children or students. (You will also want to prepare to discuss it afterward.) In the screening I attended, the audience sat in silence while the entire roll of credits went past their eyes. I cannot recall a recent film in which I have observed such a reaction.

The Boy in the Striped Pajamas
Rating & Content Info

This fictional film deals with issues surrounding the Jewish Holocaust and how two young boys—one German and one Jewish—may have perceived what was happening around them. Discussions about the rounding up of Jews and their extermination are heard. Smoke billows in the air from the crematoriums at an extermination camp. While no explicit images are seen, a Jewish boy and man are beaten off screen—the boy’s injuries are later shown, while the man dies. People are herded into a shower room and ordered to disrobe, after which they are gassed to death—no explicit nudity is seen, and the scene fades to black as the gas is turned on. A young teen girl is romantically attracted to a soldier. Social drinking is seen and cigarette smoking is portrayed.

The Boy in the Striped Pajamas Parents' Guide

With so many true stories about the Jewish Holocaust, how do you feel about the creation of fictional ones? Do you think it serves a positive purpose? Or does it undermine and/or trivialize the actual event?

The most recent home video release of The Boy in the Striped Pajamas movie is March 10, 2009. Here are some details…

Meet The Boy in the Striped Pajamas with this DVD release. Bonus extras include an audio commentary by writer/director Mark Herman and author John Boyne, deleted scenes (with optional commentary) and the featurette Friendship Beyond the Fence. Audio tracks are available in Dolby Digital 5.1 (English), with subtitles in Spanish.

A father tries to shield his son from the horrors of the Holocaust in the film Life is Beautiful. A child escapes from a concentration camp in I Am David. A group of students attempt to grasp the magnitude of the genocide that occurred during World War II in the documentary Paper Clips.

This movie is based on a novel written by John Boyne. You can find his book (also called The Boy in the Striped Pajamas) at your local library or bookstore.

Related news about The Boy in the Striped Pajamas 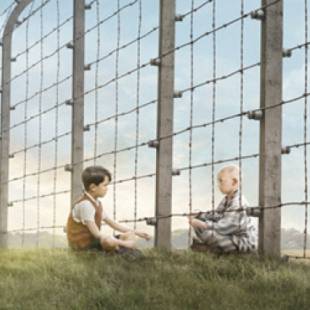 Three Films to Help Teach Children About the Holocaust