Beauty and the Beast (2017) Parent Guide

The visual spectacle of this live-action remake of the 1991 animation is sure to shake out a few new dollars for Disney Studios.

Disney takes their adaptation of the classic fairytale and creates a live-action version. This Beauty and the Beast stars Emma Watson as Belle, Dan Stevens as the Beast and Luke Evans as Gaston.

Violence C
Sexual Content B+
Profanity A-
Substance Use B

No one takes recycling as seriously as Disney when it comes to reusing a previously successful script as a second chance to make money. The studio has a long history of spin-offs and sequels from former hits and has recently seen great success with the idea of creating live-action versions of past animations (Cinderella 2015 and The Jungle Book 2016).

Based on the now classic Beauty and the Beast from 1991, director Bill Condon pulls out all the stops with this animation-to-live-action conversion. Those who have watched and re-watched his source material will have no problem picking out the familiar storyline and famous songs amid the lavish sets, amazing costumes and reimagined production numbers.

As expected, the story follows Belle (played by Emma Watson), a young bookish woman who doesn’t quite fit in with the others living in her French provincial town. Despite being called odd and becoming the object of some abuse, Belle’s good looks and the romantic challenge she presents still attract the attention of the village’s most eligible bachelor Gaston (Luke Evans). When she declines his proposal, preferring reading to marrying him, she awakens the fury of an ego scorned.

Meanwhile Belle’s father Maurice (Kevin Kline) stumbles upon a forbidden fortress in the forest where he unwittingly becomes the prisoner of its master, a terrifying Beast (Dan Stevens). When the devoted daughter discovers the situation, she selflessly offers to take his place. After the switch is accepted by the cruel creature, Maurice uses his freedom to try and round up a rescue party even though his pleas for help are met by mocking and scorn.

Unbeknownst to the grieving father, life within the stone walls proves better for Belle than it at first appeared. And the presence of the beautiful stranger brings hope to the other residents of the enchanted castle who are also held captive by a magical curse. But before the spell can be broken some hard hearts must first be softened.

This remake adds a few embellishments to the original plot, including some insights into the characters’ backstories, along with extra songs. Belle is endowed with a more feminist attitude which is expressed in her love of literacy, defiance of convention and courage in the face of fearsome circumstances. And Gaston’s sidekick LeFou (Josh Gad) is depicted as effeminate and is briefly shown dancing with another man. (The script’s hints about his same-gender attraction led to some real-life controversy for the film.)

These alterations may alarm family audiences, even though the portrayals are subtle. In truth, most youngsters are less likely to notice Condon’s admitted agenda than they are to be scared by the violence shown here. Belle and her father have encounters with some ravenous wolves that eventually lead to attacks and injuries. A mob gathers after the locals learn of their horned and hairy neighbor, and the fighting and property damage that erupt look a lot more alarming with people battling furniture and crockery than they did when it was just cartoon characterss. Gaston’s evil intentions for the Beast feature weapons use and a chase across rooftops that are more realistic and disturbing too.

Because of this, the movie is likely best suited for older children and adults. Those who are fans of the 1991 film will appreciate the way this production pays homage to their fond memories of the original. This visual spectacle is sure to shake out a few more dollars for the studio, even if the 2017 version of the fairy tale expands the message of looking for inner beauty and having empathy toward those who are different into broader territory.

Watch the trailer for Beauty and the Beast (2017)

Listen to an in-depth review…

Violence: A character is shot three times with a gun—two of these on screen, no blood is shown. Wolves attack characters on two occasions, injuries result. Characters are mocked and bullied as well as verbally and physically abused. A character abandons and leaves another character to die. Death threats are uttered and a character attempts to coerce a woman to marry him. Characters fight with swords and attempt to push one another from tall buildings. Characters lie about their intentions. Characters are restrained with ropes and imprisoned. A magical spell causes characters to transform. Some scenes may frighten young children.

Profanity: A single use of deity and a French religious term.

Alcohol / Drug Use: Implied alcohol use in a pub setting. Alcohol is served with dinner.

Reading and education are an important part of Belle’s life. How do other people in the village view her focus on books? Does their bullying and peer pressure alter her behavior? Have you experienced teasing or persecution about things you believe in or like to do? What is the best way to handle this?

In this movie we learn more about Beast and Belle’s childhood. What do they have in common? How are they different? What action by Belle or Beast leads to a change in the way they feel about each other? How might compassion and empathy affect the way you feel about another person?

Robin McKinley has written two YA novels based on this story: Beauty and Rose Daughter. Both are suitable for teens.

Heart’s Blood by Juliet Marillier puts a Celtic spin on the familiar tale. Anluan is cursed and darkness falls over his people. Then a young woman appears - a scribe, who might be able to break the curse.

From the Studio: Disney will release Beauty and the Beast in 3D on March 17, 2017. The beloved tale will be retold for the big screen with a modern live-action lens and the help of transformative CG magic. Emma Watson and Dan Stevens will star as Belle and the Beast/Prince respectively, and Luke Evans will play the role of Gaston. Emma Thompson has joined the cast as Mrs. Potts and Kevin Kline as Belle's father, Maurice.

Eight-time Oscar-winner Alan Menken, who won two Academy Awards for the 1991 animated classic, will score the film, which will feature new recordings of the original songs in addition to several new songs written by Menken and Sir Tim Rice. Bill Condon will direct from a script by Stephen Chbosky, and the film will be produced by Mandeville Films' David Hoberman and Todd Lieberman. Production begins in May at Shepperton Studios in London. - Walt Disney Studios

Home Video Notes: Beauty and the Beast
Release Date: 6 June 2017
Beauty and the Beast releases to home video (Blu-ray/DVD/Digital Copy) with the following extras:
- Enchanted Table Read – Join the cast for the movie’s elaborately staged table read, complete with singing and dancing to live music, set pieces and more.
- A Beauty of a Tale – Explore the process of transforming a beloved animated film into a new live-action classic.
- The Women Behind Beauty and the Beast – Emma Watson introduces several of the talented women in all aspects of production who helped bring this enchanted tale to life.
- Making a Moment with Celine Dion – Celine Dion shares what it’s like to sing “How Does a Moment Last Forever” – and be a part of the legacy of Beauty and the Beast.
- From Song to Screen: Making the Musical Sequences – See what goes into making some of the best-known moments from Beauty and the Beast
- Deleted Scenes with Introduction by Director Bill Condon
- Extended Song: “Days in the Sun” – Learn more about Beast’s childhood in an alternate version of this beautiful song, introduced by director Bill Condon.
- “Beauty and the Beast” Music Video – Award-winning artists Ariana Grande and John Legend perform a moving version of this iconic song.
- Making the Music Video – Go on set to capture the magic as it happens in Ariana Grande and John Legend’s “Beauty and the Beast” music video.
- “Beauty and the Beast” Disney Song Selection – Jump directly to all your favorite songs and sing along with the movie.

This movie is based on the Disney classic animation, Beauty and the Beast. Alan Menken, who wrote the music for this film also scored The Hunchback of Notre Dame, Pocahontas and Aladdin.

Related news about Beauty and the Beast (2017) 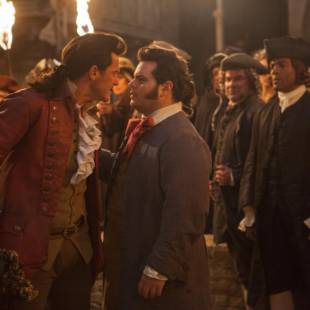