Are Ted Toys Sending the Wrong Message to Kids?

Seth MacFarlane’s movie Ted was the sleeper hit of 2012. The R-rated CGI/live-action film grossed nearly $219 million domestically and set a record in 2012 for the second highest grossing R-rated comedy ever.

But despite the fact the main character is a talking teddy bear, there isn’t much that could be considered family friendly about this plush toy that comes to life as the result of a childhood wish. Directed by the creator of the TV program Family Guy, the script if full of vulgar sexual innuendo and language, depictions of sex between a woman and a teddy bear, recreational drug use, some brief nudity and frequent strong sexual expletives.

One theater is running a campaign for viewers to win 1 of 5 “fuzzy foul-mouthed furry” bears. After watching an exclusive Red Band trailer, viewers can text in their entry. However even kids can access these highly graphic or explicit adult videos online simply by fudging their age or finding another source that doesn’t restrict minors.

Other theater chains are promoting the movie on a more public front. On the cinema’s ticket counter, at a child’s eye level, are miniature Ted bears for sale. They’re small, cute and exactly the kind of thing a child will beg a parent to buy. It doesn’t matter if the child is years younger than the approved entry age for the movie. And parents who buy the toy are supporting the film even if they don’t plan to buy tickets to see the crude and offensive production themselves.

The toys alone likely aren’t a problem, especially if your child is too young to know they are based on a profanity-spewing bear who jokes about things like illegal drugs and illicit sex. But the campaigns themselves are indicative of a bigger problem—inappropriate ads aimed at children.

Last year Value Village stopped selling highly sexualized Halloween costumes for preschoolers. Toys R Us pulled Breaking Bad action figures from their shelves as well. But the moves came only after consumers complained about the unsuitability of the products aimed at children.

An article published in Pediatrics found advertising has a pervasive influence on teens and children. Some of these marketing techniques included product placements in movies and TV shows and tie-in between movies and toys or other products. The report found that “certain tie-in products may be inappropriate for children (eg, action figures from the World Wrestling Federation or an action doll that mutters profanities from an R-rated Austin Powers movie).” Or a bear that masturbates.

Rachel Alexander, an attorney and editor writes, “The problem lies with ads being rammed in our face that contain inappropriate content. We are now bombarded with constant reminders of things we find repulsive or immoral. Our children, whose minds are still developing and so are more susceptible to influence, are being bombarded equally with this adult content.”

Rather or not they are cute and cuddly, those little bears are an ad for the Ted movie. And they’re promoting a comedy with content most parents would likely avoid discussing with their underage children. 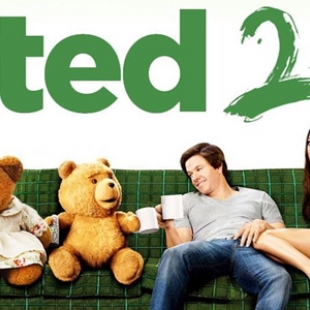 The Teddy Bear talks again...although the things he says aren't appropriate for children.