Positive lessons combined with stunning visuals and a lighthearted script, "Thor" may be a good candidate for your teens' entertainment dollars.

Banished from the realms of Asgard, Thor (Chris Hemsworth), the arrogant son of the Norse god Odin (Anthony Hopkins), is sent to Earth to guard its innocent people and preserve their peace. But his extraordinary strength and abilities are tested when he is challenged by formidable foes bent on destroying the human race and seeking revenge.

Violence C-
Sexual Content B+
Profanity B
Substance Use C

Why is Thor rated PG-13? The MPAA rated Thor PG-13 for sequences of intense sci-fi action and violence.

With Thor (Chris Hemsworth) coming alive on the movie screen, Marvel Comics unleashes yet another icon from its immense stable of characters. This son of the god Odin (Anthony Hopkins) has an arrogant attitude and lust for war that leads him to fracture a delicate truce between the people of his realm Asgard and the cold-hearted Frost Giants from the frozen world of Jotunheim. Thanks to his mighty hammer Mjolnir, Thor is unstoppable. However his impetuous attack against their enemy leaves his father with no choice but to banish his brash son to live with mortal humans on Earth. It is the only action that will satisfy the Frost Giants and restore a perilous peace.

Not surprisingly, when a man falls from the sky dressed in godly attire, people take notice. This is especially true of Dr. Jane Foster (Natalie Portman), a young scientist engaged in post-doctrinal work in the field of astrophysics. While studying the strange behavior of the night sky in New Mexico (the direct result of Thor’s sci-fi travel method), she and her colleagues literally run into the muscular man on a desert road. They provide the wandering pedestrian with a ride to the hospital in their small town, but Thor isn’t the type to accept confinement for long. Soon he is out and searching for his powerful hammer that, coincidentally, landed just 50 miles away after his father randomly tossed it out of Asgard.

While Thor’s expulsion was a necessary diplomatic step, new political problems are developing. The stress of these has left the aging Odin near death and forced to grant power to Thor’s younger brother Loki (Tom Hiddleston). Tired of standing in his giant sibling’s shadow, Loki quickly builds an alliance with the Frost Giants. But his decision is the cause of grave concern for Thor’s former team of warriors—Fandral, Hogun, Volstagg and Siff (Josh Dallas, Tadanobu Asano, Ray Stevenson, and Jaimie Alexander). Knowing things need to be set straight, the pack travels to Earth to try and convince their compatriot to return home. Needless to say, a big battle is brewing.

Parents considering Thor for young audiences will find violence to be the greatest issue. Although the large scale battles that fill the screen sport minimal blood, one character is impaled and another visibly stabbed. Countless more are tossed like rag dolls against walls and other uncomfortable objects, or subjected to immense explosions from which they emerge alive but definitely singed. Another concern is the humorous portrayal of a Taser used to render its victim unconscious, which would be deadly in reality.

Other content includes the hero and a friend downing a huge alcoholic drink with comedic consequences, and a male character is seen without a shirt. Language is limited to terms of deity (with one reference directed to Thor, implying he is legitimately a god) and a few other mild profanities.

Fortunately this prideful protagonist learns some positive lessons, providing the audience with good messages about humility, as well as respect for power and authority. Combined with stunning visuals and a lighthearted script, Thor may be a good candidate for your teens’ entertainment dollars. Just be sure you stay until the very end of the closing credits, or you’ll miss a peek at what’s coming next!

Watch the trailer for Thor

Why is Thor rated PG-13? Thor is rated PG-13 by the MPAA for sequences of intense sci-fi action and violence.

Violence: Battle sequences and fights occur throughout this film with characters being tossed and thrown. More intense depictions include an impaling, a stabbing and a character whose eye is badly damaged. Some blood and injuries are seen, but they are not overly explicit. A character is shot with a Taser and becomes unconscious. A fantastical fire blazing character razes a town and causes a great deal of damage.

Sexual Content: A man is seen topless and a woman displays unspoken admiration for his physique. A man and woman kiss.

Language: Terms of deity and a few mild profanities are used.

Alcohol/Drug Use: Two characters, including the protagonist, drink heavily in a comedic scene.

Why was Thor so determined to settle the score with the Frost Giants at the beginning of the movie? Was he right to challenge his father’s perceived apathy? Have there been any examples in history when similar decisions have been made?

If you are looking for a vibrant retelling of the story of Thor, Odin and Loki, you may want to turn to Neil Gaiman’s Norse Mythology, a novelized version of these ancient tales.

Graeme Davis has collected multiple stories of Thor in Thor: Viking God of Thunder. Part of Osprey’s Myths and Legends series, this book is illustrated by Miguel Coimbra.

Wendy Delsol’s Stork trilogy draws from Norse mythology to tell the story of Katla, a young woman who discovers she belongs to an ancient order of women with the power to decide which women will have certain babies.

The most recent home video release of Thor movie is September 13, 2011. Here are some details…

- Marvel One-Shot: The Consultant, Road to the Avengers

Thor is only the beginning of a trilogy featuring this Nordic hero. For more of his activities, you can watch Thor: The Dark World and Thor: Ragnarok. Thor also appears in The Avengers, Avengers: Age of Ultron, and Avengers: Infinity War.

Other big screen adaptations of Marvel Comic heroes are found in Iron Man, Spider-Man, The Incredible Hulk and Fantastic Four: Rise of the Silver Surfer. 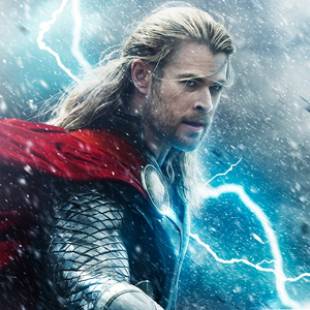