Adults and the oldest of teens will likely be inspired by the tenacity of the human spirit that still surfaces in the face of unimaginable calamity.

A vacationing family is torn apart when the floodwaters of the 2004 Tsunami crash over their Thailand hotel. Facing impossible odds, the father (Ewan McGregor) and two of his sons (Oaklee Pendergast and Samuel Joslin) set out to find his wife (Naomi Watts) and other missing child (Tom Holland).

Violence B-
Sexual Content C
Profanity B+
Substance Use B

Why is The Impossible rated PG-13? The MPAA rated The Impossible PG-13 for intense realistic disaster sequences, including disturbing injury images and brief nudity.

On December 26, 2004 an earthquake in the Indian Ocean spawned a tsunami that struck South Asian coastlines with an incredible wall of water, leaving over 200,000 people dead in its wake. Around the world, people watched the news reports with a sense of dismay. But for those at the center of the disaster, the horrors only grew after the water receded. The Impossible, directed by Spanish filmmaker Juan Antonio Bayona and based on the real life experiences of Maria Belon and her husband Henry. It tells the story of just one of the thousands of families swept up in the events of that day.

Henry and Maria (played by Ewan McGregor and Naomi Watts) arrive at an idyllic shoreline resort in Thailand for a relaxing Christmas vacation with their boys Lucas (Tom Holland), Thomas (Samuel Joslin) and Simon (Oaklee Pendergast). Then, without warning, a tidal wave of churning, dirty, debris-filled water crashes down on the resort battering the guests and employees as it plunges over them. When she finally fights her way to the surface, Maria is cut, bruised and partially unclothed from the force of the water. In the distance she catches sight of Lucas rushing along in the current. Finally, the two of them latch on to the trunk of a floating tree. But the rest of their family is nowhere to be seen.

Rescued by locals, the pair eventually ends up in an overrun hospital where Maria’s injuries worsen each day as the staff deals with an ever-growing patient load.

Meanwhile, a shoeless and blood-covered Henry, still in a state of shock, leaves Thomas and Simon in the care of a stranger (Nicola Harrison) and begins searching for his missing wife and son. But in the confusion, the two younger boys are whisked away with a truckload of orphans.

Because many of the extras in the film are actual survivors of the tsunami, there is a sense of authenticity to the emotional shock that follows the watery event. Yet the film focuses almost exclusively on “white” victims with little acknowledgement of the thousands of locals who lost not only their lives or loved ones, but their homes and livelihoods as well. (Even Henry and Maria’s family is depicted as being British although the actual family is from Spain.) The film also understates the loss of life. Rows and rows of body bags lined up on an airport tarmac and a few injured individuals lying on the side of the road don’t come close to representing the magnitude of human lives lost in this natural disaster. Although filmmakers censored the portrayal of death in this film, they didn’t edit out several scenes of female frontal nudity. While some of the scenes make sense in the context of the story, others don’t.

Still in the middle of unbelievable devastation and mayhem are incredible moments of courage and compassion. After Maria and Lucas are rescued from a tree and brought to a local village, a gray-haired woman not only tends Maria’s wounds but comforts the injured woman who can’t speak the local language. Later a group of survivors huddles together at a bus shelter, many of them protectively hoarding the last precious bits of battery life on their cell phones. But others (Sönke Möhring), in the midst of their own tragedy and pain, graciously offer their phones to strangers.

These heroic moments become the redeeming elements in this story of incredible survival. While the terrifying depiction of the tidal wave and the resulting devastation make this movie inappropriate for young viewers, adults and the oldest of teens will likely be inspired by the tenacity of the human spirit that still surfaces in the face of unimaginable calamity.

Violence:
A dirty, churning wave of water engulfs the guests and employees of a resort. Debris in the water causes serious injuries. Numerous bloody wounds, bruises, gashes and cuts are depicted. A screaming woman clings to a tree in the middle of torrent before being pulled under water. A desperate mother calls for her son. A crying child is found under debris. Dead bodies and large-scale destruction caused by a tsunami are shown. An injured woman is dragged through debris by her rescuers. Injured people are seen along the roadside. A hospital is flooded with patients. Women choke, coughing up blood and refuse from their lungs. A woman grows increasingly sick from her wounds. A man searches through rows and rows of dead bodies lying on an airport tarmac. Bloody or injured characters search for their missing loved ones. Children are rounded up and shipped away in trucks. Other scenes of death and devastation are portrayed.

Sexual Content: A woman’s breast and nipple are exposed as she changes clothes. Later her breast is exposed when her shirt is torn off during her struggle in the water and when her clothes are cut off in the hospital. Some buttock nudity is briefly seen.

Language: The script contains only a handful of mild profanities and terms of Deity.

Alcohol / Drug Use: Social drinking is shown with dinner.

Why does Maria want to help a little lost child even if it puts their lives in danger? How do others risk their own safety or comfort to help strangers? Why does Maria encourage Lucas to help at the hospital? How does that change his attitude? How do people assist others in spite of the language barriers?

What are some of the realities of dealing with a disaster of this magnitude? What are the immediate needs of survivors? How easy would it be to reunite families—especially children? What kinds of long-term aid would be needed in a disaster area? Is it easy to forget about those needs once the television cameras leave an area and move on to the next big news story?

To learn more about the 2004 Tsunami and the earthquake that started it, see: http://en.wikipedia.org/wiki/2004_Indian_Ocean_earthquake_and_tsunami

The most recent home video release of The Impossible movie is April 23, 2013. Here are some details…

The Impossible releases to home video (Blu-ray-DVD Combo Pack) with the following extras:

Another parent searches for her child in the aftermath of a subway bombing in London River. The whole world also witnessed the triumph of the human spirit over impossible odds in the events recounted in Apollo 13. Naomi Watts plays a character in fictional peril in King Kong. And Ewan McGregor tries to keep the whole universe together as Obi-Wan Kenobi in the Star Wars films.

Related news about The Impossible 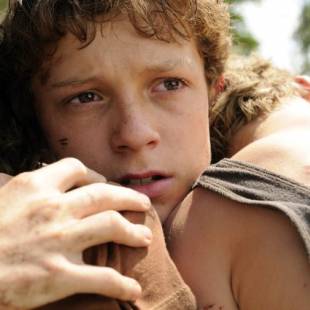