The Teddy Bear talks again...although the things he says aren't appropriate for children.

In this sequel, Ted, the stuffed bear who can talk (voice of Seth MacFarlane), has to prove he is human so he and his wife Tami-lyn (Jessica Barth) can become parents. Of course, he'll also need his buddy (Mark Wahlberg) to be the sperm donor.

Why is Ted 2 rated R? The MPA rated Ted 2 R for crude and sexual content, pervasive language, and some drug use.

Why is Ted 2 rated R? Ted 2 is rated R by the MPAA for crude and sexual content, pervasive language, and some drug use.

Language:
Approximately 220 instances of coarse and sexual language, including:
- Frequent use of the sexual expletive and variations, sometimes in a sexual context.
- Frequent use of scatological slang.
- Infrequent use of profanity, cursing and vulgar expressions.
- Sexual and ethno-cultural slurs.

Alcohol / Drug Use:
- Frequent portrayals of illegal drug use (such as marijuana) for recreational purposes.
- Substance abuse.
- Tobacco use.
- Alcohol use.

The most recent home video release of Ted 2 movie is December 15, 2015. Here are some details…

This movie is a sequel to Ted. Mark Wahlberg plays a less offensive, character in suspense films The Italian Job and The Truth About Charlie. 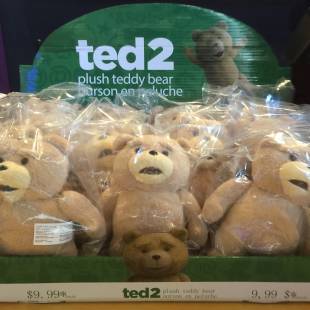 Are Ted Toys Sending the Wrong Message to Kids?