It's no surprise the script left itself open for a sequel. But unless they want this dad to defend the next generation, they'd be mistaken to take this aging ex-operative out of retirement again.

In this third installment of the franchise, it is Bryan Mills' (Liam Neeson) reputation that is taken. Accused of murder, the ex-agent uses his former skills to track down the real killer.

Violence D
Sexual Content B-
Profanity D+
Substance Use B

Why is Taken 3 rated PG-13? The MPAA rated Taken 3 PG-13 for intense sequences of violence and action, and for brief strong language.

Of the top ten grossing movies of 2014, six were sequels. I am in no way suggesting Taken 3 may be one of this year’s blockbusters, but it appears we could be in for another string of continuing storylines in 2015.

The challenge of sequels is keeping the plot fresh while staying true to whatever made the franchise popular with audiences in the first place. In the case of Taken, it may be action star Liam Neeson and his gravely voice. Unfortunately, every plotline centers on his character’s family who is continually being hounded by miscreants. And Bryan Mills (Neeson) is a one-trick pony when it comes to defending them. There’s no diplomacy. No tact. No subtlety. He always responds with an all out assault on anyone who threatens his daughter Kim (Maggie Grace) or his former wife Lenore (Famke Janssen), a woman for whom he still has feelings. And that means by the time the credits role in this series of movies there is a throng of dead guys cluttering the screen.

Even though this ex-covert operative’s only tactic is disposing of criminals, he does it in a myriad of ways—choking, shooting, stabbing, slamming people into walls and whacking them over the head. He also employs waterboarding and other means of torture to elicit information from the unlucky thugs who cross his path.

In the past films he’s had to rescue his daughter Kim from kidnappers who forced her into the foreign sex trade and then free himself and Lenore from revenge-seeking abductors in Istanbul. This time the action happens at home. Bryan returns to his apartment to find Lenore dead in his bed. The cause of death is a slit throat. Yet she looks more like a Sleeping Beauty laid peacefully to rest. (Although this movie is awash with violence there is an unbelievable lack of blood—even when a man puts a gun in his mouth and pulls the trigger.) Moments later, two armed officers rush into the bedroom to find Bryan kneeling beside the bed with a knife in his hand. Clearly being framed for the murder, the bereaved husband disarms the police and jumps out the window. Most of the movie consists of him outrunning the law enforcers including a bumbling Inspector (Forest Whitaker) who is so fixated on apprehending the supposed killer that he neglects looking for any other suspects.

The Taken franchise has always been about safeguarding one’s family. But the cost of doing so is horrendous. Bryan might be able to justify killing off bad guys, but in one scene he causes a massive highway accident that sends a cargo box hurtling down the roadway, crushing car after car as is bounces and careens before landing on top of a sedan. While Bryan manages to avoid death by explosion on several occasions, I highly doubt the people in those vehicles made it out alive. There are also hundreds of thousands of dollars in property damage left in his wake. Yet this vigilante walks away at the end of the movie without facing a single consequence for any of it.

With the prevailing appeal of sequels, it’s no surprise the script left itself open for a follow-up should filmmakers decide to revisit Bryan Mills and his troubled family. But unless they want him to defend the next generation, they’d be mistaken to pull this embattled and aging ex-operative out of retirement again.

Why is Taken 3 rated PG-13? Taken 3 is rated PG-13 by the MPAA for intense sequences of violence and action, and for brief strong language.

Violence: A character is kidnapped at gunpoint and forced into the trunk of his car with a dead dog. He is later shot. A man finds a woman dead in his bed. He is confronted by police with their guns drawn. He attacks and disarms them before escaping. Later he chokes an officer and pushes him out of a moving car. He forces a man to drive wildly through on-coming traffic. He causes an accident that crushes many cars. Several huge explosions cause property damage and presumably death. Students run from a university campus after police officers swarm a building with guns. Characters engage in brutal hand-to-hand combat. A man puts a gun in his mouth and shoots himself. He is seen falling to the ground but there is not blood or other injury depicted. A man uses waterboarding techniques to get information from another character. Scores of characters are gunned down with handguns or automatic rifles. Numerous explosions occur. Characters are also stabbed, electrocuted, beaten and stabbed.

Sexual Content: A woman appears to be upset after taking a pregnancy a test and discovering it is positive. Two women canoodle in a hot tub with a man. A man is seen in his underwear. Brief kissing and embracing is shown.

Language: Crude terms for sexual activity are used along with a strong sexual expletive in a non-sexual context. The script also includes scatological slang, cursing, profanities and some terms of Deity.

Alcohol / Drug Use:A couple has a glass of wine before dinner. Characters drink in a hot tub.

From the Studio: Liam Neeson returns as ex-government operative Bryan Mills, whose life is shattered when he’s falsely accused of a murder that hits close to home. As he’s pursued by a savvy police inspector, Mills employs his particular set of skills to track the real killer and exact his unique brand of justice. Written by 20th Century Fox

Talk about the movie with your family… After Kim announces she is pregnant, her father tells her the choice is up to her. Unfortunately what the choice is remains ambiguous. Is it to abort, marry the baby’s father, or something else? Considering how strongly Bryan defends his family, does it seem likely that he would encourage an abortion?

Lenore says she has bad luck when it comes to men, however she is still attracted to her former husband and comes to him for advice. Do you think it is her choice in men that is bad or does she have personal issues that keep her from successfully remaining in a relationship? Why does she appear just to want what she can’t have?

The Inspector wears an elastic around his wrist that he frequently snaps. While it may be because he fidgets, it may also be a way to help him break a bad habit. Here’s some suggestions for how you can break a bad habit in the new year.

The most recent home video release of Taken 3 movie is April 21, 2015. Here are some details…

This movie is the third film in a franchise. It was preceded by Taken and Taken 2. 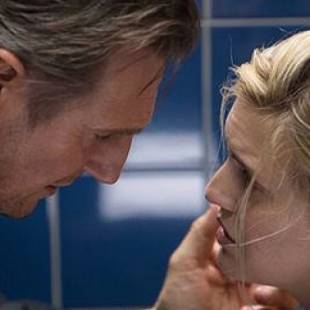