The Sound of Music Parent Guide

With frequent pauses for musical numbers from the score composed by Rogers and Hammerstein, The Sound of Music has sung and danced its way into the hearts of generations of moviegoers.

In this classic musical, a nervous novice named Maria (Julie Andrews) agrees to act as a governess for the von Trapp family before taking her vows. But instead of becoming a nun, the impetuous and passionate young woman finds a new vocation where she will need the sound of music to help her climb every mountain until she finds her dream.

Violence A-
Sexual Content A
Profanity A
Substance Use A-

The Sound of Music is considered to be one of the greatest movies of all time. Based on a true story, the film follows the plight of a young woman named Maria (Julie Andrews), who wants to become a nun. Although it is obvious to everyone except her, she really isn’t cut out for the strict routines of convent living. Hoping to help the novice find a vocation more suited to her impulsive personality, a kindly Mother Superior (Peggy Wood) suggests Maria take a temporary job as a governess and use her time away to seriously contemplate the path God would have her take.

Maria is, of course, less than enthusiastic when she discovers her charges are the seven unruly offspring of Captain von Trapp (Christopher Plummer). A retired naval officer, the widower has had a devil of a time keeping a governess in his house. But any faith he may have had in receiving heavenly help from the apprentice nun is quickly dashed shortly after their first interview. Less than obedient to his military style of child rearing, Maria is as well late for meals and casual about bedtimes (especially during thunderstorms). However, a previous engagement with a beautiful Baroness (Eleanor Parker) in Vienna forces him to leave the children in her care while he is away from Salzburg.

In his absence, Maria takes the liberty of introducing his family to playtime, picnics, fieldtrips and music (the later of which has been forbidden in the von Trapp home since the death of the children’s mother). In short order, she has fallen in love with the kids, and they with her. However, when Captain von Trapp returns with his lovely fiancée in tow, he is horrified by the changes she has instituted in his domestic routine.

Meanwhile the rumors of war and the rise of Hitler’s regime are threatening the peaceful Austria they all call home. Fears of being pulled into the conflict against political conscience also hound the family’s hopes for happiness.

With frequent pauses for musical numbers from the score composed by Rogers and Hammerstein, The Sound of Music has sung and danced its way into the hearts of generations of moviegoers. Combining the beauty of the European countryside with a story about prevailing over opposition, this 1965 masterpiece is and ever will be, an inspiration for all audiences.

Watch the trailer for The Sound of Music

The Sound of Music Parents' Guide

Maria helps the children deal with stress and anxiety by having them “simply remember [their] favorite things.” How does focusing our attention on the good improve our chances to not “feel so bad?” Do you think this advice would work in real life situations?

Mother Superior tells Maria that the love between a man and a woman is holy. What things can a husband and wife do that could be considered honorable in the Lord’s eyes? How could her council to “Climb every mountain, ford every stream, follow every rainbow, ‘til you find your dream,” be applicable to struggles you might be facing?

For those interested in the truth behind the movie, “The Story of the Trapp Family Singers” is a memoir written by Maria Augusta Trapp herself. An outside perspective, “The Sound of Music Story: How a Beguiling Young Novice, a Handsome Austrian Captain, and Ten Singing von Trapp Children Inspired the Most Beloved Film of All Time” explores the history that built the movie.

The most recent home video release of The Sound of Music movie is March 10, 2015. Here are some details…

South Pacific was another Rogers and Hammerstein musical that achieved huge success at the box office and enduring audience appeal. An older Julie Andrews can be seen in The Princess Dairies 1 and The Princess Diaries 2: Royal Engagement.

A more modern take on the classic Hollywood musical is LaLa Land, which stars Ryan Gosling and Emma Stone.

A Hidden Life details the true story of Franz Jägerstätter, a conscientious objector to the war following the Anchsluss between Germany and Austria. Much like the von Trapp family, Jägerstätter realizes that his objections will be poorly received by the Nazis.

Related news about The Sound of Music 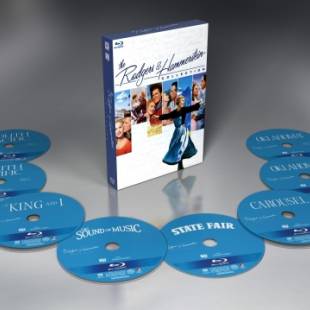