Five years ago, Mia Thermopolis (Anne Hathaway) discovered she was the heir apparent of a tiny European country called Genovia. Now, the once klutzy American teen has grown into a poised young college graduate ready to assume her royal duties --that is until she discovers that in order to be queen she must also be married.

Violence B+
Sexual Content B+
Profanity A
Substance Use A-

Five years ago, Mia Thermopolis (Anne Hathaway) discovered she was the heir apparent of a tiny European country called Genovia.

Now—although she still has her clumsy moments—the klutzy, frizzy haired American teen has grown into a poised young college graduate who is ready to assume her royal duties.

However, she doesn’t count on becoming Queen so quickly.

Ready to hand over the crown, her grandmother Clarisse (Julie Andrews) wants Mia to succeed her as the reigning monarch. Parliament, on the other hand, has a different idea. Hearkening back to an ancient law, they demand the Princess be married before she ascends to the throne or that she renounces her right to rule.

Behind the plot is Viscount Mabrey (John Rhys-Davis), a power-seeking parliamentarian who is anxious to see his nephew, Lord Nicholas Devereaux (Chris Pine), hold the scepter.

Given a 30-day deadline, Princess Mia can’t wait around for a fairy godmother to find her a suitable suitor. With the help of Joe (Hector Elizondo), the head of palace security; Charlotte (Kathleen Marshall), the Queen’s executive assistant; and her best friend Lilly Moscovitz (Heather Matarazzo), Mia flips through the files of all the available bachelors in the area and settles on Lord Andrew Jacoby (Callum Blue).

But as her wedding day draws nearer, she finds her feelings changing in unexpected ways toward her rival, Lord Nicholas.

Like the first movie, The Princess Diaries, this script never strays far from the anticipated plot. Still The Princess Diaries 2: Royal Engagement is more than a fun return to the kingdom of Genovia. It takes a look at the difficult challenges that come with growing up—finding the balance between personal interests and adult obligations. Taking her responsibilities seriously, the forward-thinking Mia is willing to sacrifice almost anything to serve the people of her country. Still, she wants to succeed on her own merits and introduce new opportunities for everyone in the empire, regardless of gender.

Garry Marshall takes his responsibilities as director seriously as well. When the girls do a little mattress surfing at Mia’s bridal shower sleepover, he makes it obvious the princesses are using a slide built purposefully for the planned event, rather than a staircase. According to the press release, he didn’t want to model an activity that might be unwise for kids to try at home.

With very few content concerns, other than a suspect but innocent night spent in the forest, some slapstick antics and a couple of brief comments, this film provides entertainment for children and adults alike. It also gives audiences a chance to hear the vocal talent of Julie Andrews on-screen for the first time since her throat surgery in 1997.

During her initiation into the traditions and protocol of regal life, Mia discovers that being a princess means much more than wearing a tiara. Hopefully her realization will help girls everywhere appreciate that there is a little bit of royalty in everyone.

Although she is afraid, Mia takes her responsibilities seriously. What helps her gain the courage she needs? How does she face setbacks? What does she learn about her own capabilities?

What did Mia mean when she said she understood the expectations of being a royal, but that she sometimes had trouble with the execution? Why are some actions or behaviors difficult to do even when we know they are important?

What kind of relationship did Mia have with her grandmother? How did they resolve their differences? What things did they learn to appreciate about one another?

The most recent home video release of The Princess Diaries 2: Royal Engagement movie is May 14, 2012. Here are some details…

Mia isn’t the only girl who wants a break from her royal responsibilities once in a while. In Roman Holiday, a princess sneaks out of the castle for a little sightseeing on her own and meets up with a foreign correspondent. Julie Andrews may be most famous for her role as a singing nun and governess in The Sound of Music. Anne Hathaway plays a young girl who waits at home while her boyfriend serves a mission for his church in The Other Side of Heaven. 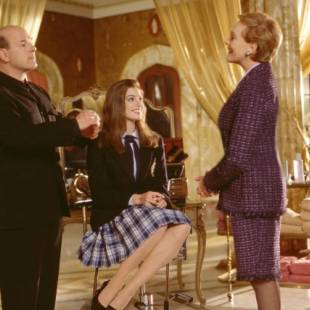