For the most part, the film stays true to the original spirit of "Paddington". And it is one of those rare movies that will entertain parents and children alike.

Paddington (voice of Ben Whishaw) finds himself in a sticky situation in a London Train Station, until he is taken into the kindly care of the Brown Family (Hugh Bonneville, Sally Hawkins).

Violence C+
Sexual Content B
Profanity A-
Substance Use C

Why is Paddington rated PG? The MPAA rated Paddington PG for mild action and rude humor.

I have fond memories of watching the original Paddington Bear television series in the 1970s, so it was with a mix of anticipation and skepticism that I sat down to view the beloved character’s first big movie appearance. The earlier animated series never demeaned its young audience by reveling in nonsense—something that can’t be said of most Saturday morning cartoons. Yet, after watching the promotional clips for this “new” Paddington, I was concerned. It was obvious Nicole Kidman’s character was the “bad guy”, and I wondered why the script needed one when the series never did.

The good news? Unlike most trailers, the one for Paddington focuses on the movie’s worst moments.

The film begins with Paddington’s early days in Peru, where he lives with his very industrious Aunt Lucy and Uncle Pastuzo (voiced by Imelda Staunton and Michael Gambon) until an earthquake destroys their home and takes his uncle’s life (possibly the most frightening point for young viewers). Aunt Lucy, apparently well read, suggests her nephew leave for London because the people there cared so well for their children during World War II. So she puts the youngster on a freighter with a tag around his neck that reads, “Please look after this bear. Thank you.” The talking cub (voiced by Ben Whishaw) ends up on the platform of Paddington Station in England’s capitol, and that’s where he meets the Browns.

Henry and Mary Brown (Hugh Bonneville and Sally Hawkins) and their children Judy and Jonathan (Madeleine Harris and Samuel Joslin) have mixed feelings about taking the stranger in—and none of them involve the peculiarity of discovering an orphaned, talking bear in a tube station. Mary’s mother instincts immediately engage in the need to rescue the little ursidae. Henry however, who makes his living as a risk analyst, is anything but pleased with the notion. His first reaction is to call his insurance company and add special coverage for Paddington. It’s a good thing he does, because their new friend’s first bath doesn’t go as planned.

From this point forward the Browns focus on finding Paddington a permanent home, ideally with the English explorer who originally visited Peru and offered the bear’s family a place to stay if ever they were in London. Meanwhile grumpy Mr. Curry (Peter Capaldi) living next door unwittingly becomes involved in plot to capture the cub and have him stuffed—a ruse planned by the evil taxidermist Millicent (Kidman). (Really, it would have been smarter if she had first checked the open market value of a live, talking bear, capable of making marmalade sandwiches!)

Stupid antagonist aside, the plot proves amazingly compelling. To begin, the writing is spiced with just the right amount of British humor. A great example is Paddington’s first attempt at using an escalator. Upon seeing the sign saying, “Dogs must be held”, he finds a pooch to take with him. And then there’s a short car chase with a British GPS that exclaims, “In 100 yards, bear left.” Other moments involve slapstick humor that never gets out of hand, and had the children in my screening laughing more than I’ve heard during a movie for some time. Finally the visual impact of this film is mesmerizing. The animated bear is perfectly integrated into a live action environment filled with intricately designed sets, props and locations. And did I mention the cool little calypso band that shows up at the most unlikely moments?

Still, there are a few pitfalls family viewers should be aware of. The violence gets a little more serious when Millicent uses darts to tranquilize animals and humans. She also ties up a cabbie and hangs him by his feet over the Thames until he blurts out the information she’s looking for. Also somewhat disappointing are a couple of brief, veiled sexual innuendos and the inclusion of a drinking game during which the Brown’s housekeeper (Julie Walters) attempts to distract a security guard. (The two end up very drunk.)

Yet I’m confident the production will offer audiences much to enjoy. For the most part, it stays true to the original spirit of Paddington. And it is one of those rare movies that will entertain parents and children alike.

Why is Paddington rated PG? Paddington is rated PG by the MPAA for mild action and rude humor.

Violence: In an attempt to gain information from a taxi driver, a character hangs the man by his feet while dangling over a river (we don’t see how she accomplishes this task with the rather portly London cabbie) and threatens to “remove body parts” (such as nose hairs) if he doesn’t cooperate. After giving her the information, the woman cuts the rope and he falls into the river—it is not implied that he drowns. A character shoots a bear and other humans with tranquilizer darts. A taxidermist determines to kidnap a bear and have him stuff. A character gets into situations that result in property damage, including overflowing a bathroom with water. An earthquake forces a family of three bears from their home; after the destruction is over the “father” bear’s hat is found in the rubble, indicating he died. A young character is forced to separate from his guardian. A young boy plays with rockets within their home; in a later scene he and his father are seen lighting a rocket inside their dwelling. A character breaks into a home; another character accidentally turns on the gas stove that starts a small fire.

Sexual Content: A male character dresses as a woman to disguise his identity; when another character tells him he looks pretty, he remarks, “That’s what they’ll think in jail”. A woman uses sensuality to entice a man to help her engage in a plot to kidnap a bear.

Language: There is a muffled use of the word “bloody”.

Alcohol / Drug Use: Within a comedic context, two characters engage in a game where they both drink a large amount of hard liquor—they are later seen very inebriated.

Talk about the movie with your family… Paul King, the director of Paddington, included the calypso music because in 1948 there was a large number of Caribbean immigrants that came to the area in London were Paddington eventually makes his home. This BBC post has additional information about the film, the music and the original creator of Paddington, Mr. Michael Bond. The author is now 88 years old and has a cameo in the movie.

More About the Movie: Paddington Bear has been a classic character in children’s books and on TV. Learn more about the background of this beloved bear. In this film the beloved bear is brought to life with computer animation.

From the Studio: PADDINGTON follows the comic misadventures of a young Peruvian bear with a passion for all things British, who travels to London in search of a home. Finding himself lost and alone at Paddington Station, he begins to realize that city life is not all he had imagined - until he meets the kindly Brown family, who read the label around his neck (‘Please look after this bear. Thank you.’) and offer him a temporary haven. It looks as though his luck has changed until this rarest of bears catches the eye of a museum taxidermist… - Written by Marmalade Films

The most recent home video release of Paddington movie is April 28, 2015. Here are some details…

Curious George is another inquisitive soul who leaves his home for the big city and finds a friendly caregiver. ET- The Extra-Terrestrial tumbles to Earth from an alien world and takes refuge with a trio of siblings. Winnie the Pooh is another famous British Bear 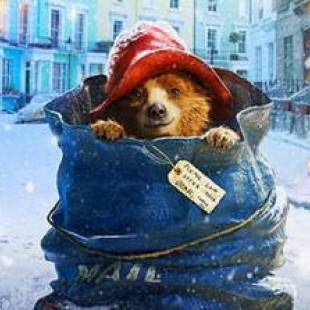