Everyone screams in this movie, including the many children that are being sought by the witches so they can steal their souls.

Violence C-
Sexual Content B-
Profanity B
Substance Use --

Why is Hocus Pocus rated PG? The MPAA rated Hocus Pocus PG for some scary sequences and for language

A Walt Disney film about three witches that were hung in witch happy Salem, Mass. 300 years ago. Along the way, they made a person into an immortal cat. Now it’s 1993, and the cat is still around. The witches, however, are lying in wait, as they cast a spell that allows them to return if a virgin lights a particular candle on Halloween. The virgin comes, in the form of a teenage boy, and along with help from the cat and the boy’s girlfriend, the rest of the movie is focused on getting the hags back in the ground.

The only thing that saves this movie from being a flat D (or worse) is one or two funny moments. During the other 92 minutes, you are subjected to a screaming feast of stupid lines, off-color remarks, and an incoherent plot.

Disney is selling this film on Bette Midler, who, Disney is quick to point out, is a big hit in the rental shops. Midler is a waste in this movie. She sings one song, which, along with everything else in the movie, happens so quickly and out of sequence that you begin to wonder if you fell asleep for a moment.

With continuous derogatory references to the fact that a teenage boy can still be a virgin, and some very graphic scenes (heads falling off, fingers being cut off), and one emphatic profanity, the one person rolling in the grave would be Walt Disney himself. I cannot believe he would let his company produce such trash if he was still in command. 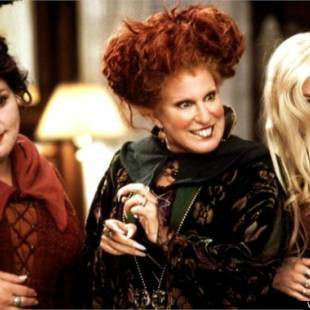