Director Brian Henson (son of Jim Henson -- creator of the Muppets) takes the popular children's show from the 1980s, throws in a human cop (Melissa McCarthy) and a puppet private eye (voice of Bill Barretta), plus an ample amount of crass humor, and presents a murder-mystery spoof fit to betray a long legacy of family-friendly entertainment.

Alcohol / Drug Use:
- References to drugs, alcohol or tobacco
- Substance abuse
- Tobacco use

News About "The Happytime Murders"

From the Studio: No Sesame. All Street. THE HAPPYTIME MURDERS is a filthy comedy set in the underbelly of Los Angeles where puppets and humans coexist. Two clashing detectives with a shared secret, one human (Melissa McCarthy) and one puppet, are forced to work together again to solve the brutal murders of the former cast of a beloved classic puppet television show. The Happytime Murders loosely references the 1980's TV series, The Muppet Show.

The most recent home video release of The Happytime Murders movie is December 4, 2018. Here are some details…

Related news about The Happytime Murders 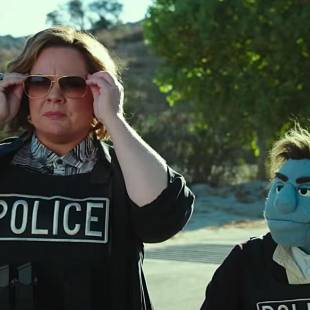