Considering how difficult it is to find tween-appropriate films that are both entertaining and devoid of adult-oriented material, this production was a pleasant surprise.

Miley Stewart (Miley Cyrus) has been enjoying the "best of both worlds" by living anonymously as an average American teen, while her popular stage persona Hannah Montana enjoys national recognition. Fearing her pop-star status is beginning to go to her head, her father (Billy Ray Cyrus) decides the teen needs to remember her humble roots -- so he takes the singer back to their hometown of Crowley Corners, Tennessee.

Because of the gender, age and interests of my children, I’ve missed out on the Hannah Montana phenomenon. So I wasn’t quite sure what to expect walking into a theater full of Hannah fans that squealed with delight when the perky pop princess appeared on the screen.

I was also leery of yet another half hour sitcom forcibly stretched into a full-length film. Yet considering how difficult it is to find tween-appropriate films that are both entertaining and devoid of adult-oriented material, this production was a pleasant surprise.

Miley Stewart (Miley Cyrus) is riding the wave of success as the singing sensation Hannah Montana. But only a few people know about her alter ego. One of them is her best friend Lilly Truscott (Emily Osment) who is about to celebrate her 16th birthday. And Miley has promised to be there, as herself, not Hannah.

However, when Miley gets a chance to put on the blond wig and fill in at an award’s show for Beyonce, her celebrity status goes straight to the young performer’s head and she finds herself in a catfight with model Tyra Banks over a pair of shoes. After photos of the incident appear in all the papers, Miley’s dad Robby Ray (Billy Ray Cyrus) decides it is time for his daughter get re-grounded. Hijacking her private jet, he shuffles Miley off to her hometown of Crowley Corners, Tenn. just in time for her grandma’s (Margo Martindale) birthday party at the family ranch.

Throwing a fit over her missed opportunity in the Big Apple, Miley frustrates everyone with her diva antics. But at least a few people aren’t buying in to the tantrums. Grandma Ruby is quick to put her foot down with her overindulged offspring, as is Travis Brody (Lucas Till), a handsome young man who works at the homestead.

Taking time to disconnect from the glimmer and glitz of Hollywood and reconnect with the rural values and work ethics of her Tennessee relatives proves to be good for the teen. Then a land developer (Barry Bostwick) threatens to undermine the community by building a large commercial project in the quiet countryside. With only limited time, the townsfolk must come up with a huge amount of money for back taxes to stop the venture.

As the town’s fundraising efforts begin to stall, someone suggests asking Hannah Montana to perform at a benefit concert. Wanting to keep her alter identity secret but eager to help the people of Crowley Corner, Miley finds herself caught up in an expanding web of deceit that is hurting all kinds of honest folk.

Miley’s dilemma may also cause some discomfort for young viewers who appreciate the singer’s desire to keep her two personas separate. Fortunately for Miley, the film provides encouragement and guidance from caring and creditable adults as well as some very good friends. It also portrays the strength of a small town that pulls together when times are tough.

Though I left the screening with the music from "HoeDown ThrowDown" thoroughly entrenched in my brain for the rest of the evening, Hannah Montana: The Movie is still a positive script with some better-than-expected performances and admirable life lessons.

When Miley is unable to break through a throng of screaming fans to get into the arena for her concert, she and her friend steal a golf cart from a security guard and drive wildly through the building. A reporter repeatedly attempts to get an interview with the young performer. Two females hit, kick, tackle and push each other during a fight. One of them narrowly misses hitting the other with the pointed heel of a shoe. Other cartoon-type violence includes a girl being dropped by a group of boys and falling off a horse. A boy is supposedly bitten in the posterior by an alligator. A cake explodes covering a young man with icing. A man is tricked into eating hot sauce. Later he trips on small objects, falls through a decaying porch and rolls down a hillside into a pool of mud. A man mistakenly breaks a large number of collector plates. Characters fall out of trees or have a small rodent climb inside their clothes. A couple is sprayed with a fire extinguisher. Two adults kiss and embrace. Infrequent mild cussing.

What influence does Miley’s grandmother have on her? What role can extended family play in raising and encouraging children?

What does Miley learn about honesty in relationships? How does other people’s willingness to forgive impact this young singer?

The most recent home video release of Hannah Montana - The Movie movie is August 18, 2009. Here are some details…

Hannah Montana: The Movie does a hoedown on home video in a choice of three editions:

- DisneyFile: I Should Have Gone To Film School and The Hoedown Throwdown Dance-Along

This singing teen, who began on a Disney Channel sit-com, previously graced the silver screen in the 3D presentation of the Hannah Montana & Miley Cyrus: Best of Both Worlds Concert. Miley also lends her vocal talents to Penny in the animated movie Bolt. 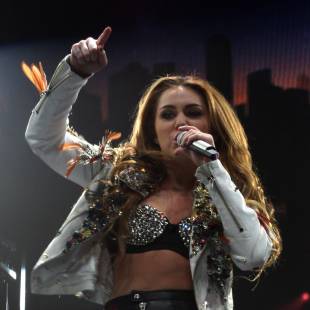