Deliver Us From Evil Parent Guide

Strange things come out when a police investigation collides with an exorcism.

A series of unsettling crimes forces police officer Ralph Sarchie (Eric Bana) to consult with a priest who claims to be an exorcism expert (Edgar Ramirez) in order to stop the violence.

Drug and Alcohol Use:
- Tobacco use.
- Alcohol abuse.

News About "Deliver Us From Evil"

In DELIVER US FROM EVIL, New York police officer Ralph Sarchie (Eric Bana), struggling with his own personal issues, begins investigating a series of disturbing and inexplicable crimes. He joins forces with an unconventional priest (Edgar Ramirez), schooled in the rituals of exorcism, to combat the frightening and demonic possessions that are terrorizing their city. Based upon the book, which details Sarchie's bone-chilling real-life cases. Written by Sony Pictures Entertainment

The movie Deliver Us From Evil is based on the book Beware the Night, by former police officer Ralph Sarchie.

The most recent home video release of Deliver Us From Evil movie is October 28, 2014. Here are some details…

Deliver Us FromEvil releases to home video on October 28, 2014.

Writers Paul Harris Boardman and Scott Derrickson also worked together on the Exorcism of Emily Rose. Eric Bana plays a tortured hero in The Hulk. And Edgar Ramirez can be seen in smaller roles in The Bourne Ultimatum, Wrath of the Titans, and Vantage Point.

Related news about Deliver Us From Evil 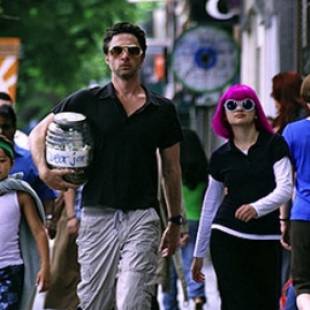