Every game has winners and losers.

When many people were losing fortunes during the financial crisis of 2007-2010, there were a shrewd handful who were able to take advantage of the housing market collapse. This is their story.

This additional information about the movie’s content is taken from the notes of various Canadian Film Classification boards:
Violence:
- Some scenes may frighten children.

News About "The Big Short"

The Big Short opens in limited theaters on December 11, 2015, and then expands nationwide on December 21, 2015. Note: This movie is based on the book The Big Short: Inside the Doomsday Machine by Michael Lewis, which chronicles some true stories. Learn more about the financial crisis that started in 2007.

The most recent home video release of The Big Short movie is March 15, 2016. Here are some details…

The ethics of investing are explored in the movie Wall Street: Money Never Sleeps. Back room misconduct causes a man to become The Informant! And a father gives his all to improve his financial situation in The Pursuit of Happyness.

Related news about The Big Short 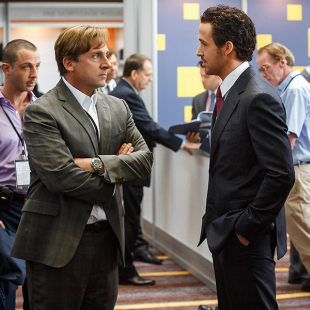