Although lengthy, this epic film features an amazing chart race, impressive cinematography and a solid story line that makes every minute worth watching.

Boasting the most impressive chariot race ever put to film, Ben-Hur tells the fictional story of a Jewish man (Charlton Heston) who is unjustly accused and sentenced to the galleys of a Roman battleship. While his desire for revenge keeps him alive, he is unable to really live until he hears about forgiveness from a condemned Rabbi named Jesus.

Violence C+
Sexual Content B+
Profanity A-
Substance Use A-

Why is Ben-Hur rated G? The MPAA rated Ben-Hur G

Over forty years ago, Ben-Hur raced into movie theaters and garnered 11 Academy Awards including Best Picture, Best Director and Best Actor for a young Charlton Heston. With the recent releases on DVD and Blu-ray, Warner Home Video (who now hold the movie’s rights) may be hoping this epic saga of betrayal and revenge, will win again.

Heston plays Judah Ben-Hur, a wealthy Jewish prince and merchant living under Roman rule in the city of Jerusalem during the time of Christ. When his childhood friend Messala (Stephan Boyd) returns to the city as Commanding Officer of the Roman Legion, Ben-Hur is pleased to renew their friendship. But an unlikely accident soon pits the two men on opposite sides of the law. Seeing a chance to secure his position with his ruling peers and leaders, Messala withholds important information about the incident and allows Ben-Hur to be sentenced as a galley slave while his family is sent to the dark cells of an underground prison.

Harboring a rage that grows with each stroke of the oars, Ben-Hur vows to avenge their unwarranted betrayal. During a seemingly disastrous sea battle, he escapes the sinking ship and is set adrift in the company of Quintus Arrius (Jack Hawkins), the commanding officer of the Roman warship. Impressed by the captive’s will to live, Arrius takes Ben-Hur as his slave, training him to become a renowned charioteer in the Roman Coliseum.

Years later, after finally earning his freedom, Ben-Hur returns to Jerusalem and confronts Messala in one of the best-known chariot races ever recorded in cinematic history. Yet the malice Ben-Hur feels continues to haunt him and sour his personal relationships until he hears of Jesus and his teachings.

Clocking in at 212 minutes, this movie, littered with a heavy dose of Roman violence, is a full evening of entertainment. However the impressive sets, intriguing cinematography and solid storyline of personal struggle make this classic 1950’s film worth every minute of watching.

Why is Ben-Hur rated G? Ben-Hur is rated G by the MPAA

Overall: A- A wealthy young man betrayed by a friend is almost destroyed by revenge until he has a change of heart.

Violence: C+ Brick falls and scares horse, man hurt in fall from horse, man holds another man in a choke hold, man taken prisoner by armed soldiers, man threatens another man with a spear, men left too die in the desert, thirsty men denied water, men whipped, extended battle scene between war ships with scenes involving blood, whipping and drowning, man seems to kill another man by choking, sword fighting between men on ship, bloody water is shown during battle, man speared in back, face burned with fire, man hit unconscious, numerous scenes of men yelling at and/or whipping horses, reference to men being tortured, man yells at woman and grabs her, extended race scene including men falling from chariots and being run over, chariots crashing into one another, man dragged by horses, contenders fighting (some blood shown), bloody and injured man shown, reference is made to cutting off injured man’s legs, man dies of injuries, man shown with bloody back, people throw rocks at others, man whipping naked back of another man, some blood shown, man carrying cross, crucifixion scenes, bloody water shown beneath the cross, violent thunderstorm.

Sexual Content: B+ Men shown in bath area wearing only towels fastened around waists, kissing scenes between unmarried couple, reference to having many wives.

Language: A- Some mild language, references to Deity used as proper nouns.

Alcohol / Drug Use: A- Men drinking what may be alcoholic beverages.

“The stone that fell from this roof so long ago is still falling,” says the servant girl Ester (Haya Harareet) to Ben-Hur. What do you think she means by this statement? How did this one incident change the life of Ben-Hur and his family?

Leprosy is a highly infectious disease that is still found in parts of the world today. To learn more about this disease go to http://www.ilep.org.uk/faq.htm.

The most recent home video release of Ben-Hur movie is February 7, 2012. Here are some details…

Ben-Hur releases in a 50th Anniversary Edition in a 4-Disc Blu-ray/DVD Combo Pack. Bonus extras include:

The classic movie Ben-Hur releases to Blu-ray in a 50th Anniversary Ultimate Collector’s Edition 2, which includes:

- Ben-Hur: The Making of an Epic

- Highlights from the 1960 Academy Awards Ceremony

- Ben-Hur: A Journey Through Pictures

- Ben-Hur: The Epic That Changed Cinema

A Limited and Numbered Edition of Ben-Hur is also available and features a reproduction of Charlton Heston’s Personal Diary.

If Ben-Hur wasn’t of epic proportions before, it sure is now! This four-disc set answers everything you could ever even think of to ask about this 1959 classic. Bonus materials include: a commentary by film historian T. Gene Hatcher (with scene-specific comments from Charlton Heston), a vintage newsreels gallery, highlights from the 1960 Academy Awards ceremony, a theatrical trailer gallery, screen tests (of Leslie Nielsen and Cesare Danova, Leslie Nielsen and Yale Wexler, as well as George Baker and William Russel) and details about actress Haya Harareet’s hair and make-up.

There is also a wealth of documentaries. Ben-Hur: The Epic That Changed Cinema provides interviews with current filmmakers, such as Ridley Scott and George Lucas, and their reflections on the importance and influence of this movie. The 1994 Ben-Hur: The Making of an Epic, hosted by Christopher Plummer, and the1986 Emmy Award-nominated film directed by William Wyler are part of the package too. Fans of pre-production paraphernalia will appreciate, Ben-Hur: A Journey Through Pictures - an audiovisual recreation of the film via stills, storyboards, sketches, music and dialogue, while film historians will be happy to take a look at the 1925 feature-length silent version of Ben-Hur, presented with a stereophonic orchestral score by composer Carl Davis.

The Ben-Hur: Four Disc Collector’s Edition is available in English and French (both audio tracks are recorded in Dolby Digital 5.1), with subtitles in English, Spanish, and French.

Another epic film featuring Charlton Heston (this time as John the Baptist) is The Greatest Story Ever Told. If you are looking for movies set during the life of Christ, check out The Robe. 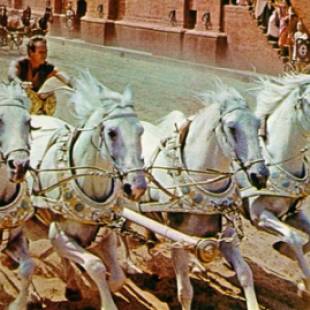