We know boredom is becoming a real problem as we keep sheltering in place. This week’s suggestions provide a variety of movies to watch, ranging from educational to heartfelt to entertaining.

Coco This visually stunning story of a young boy whose quest to become a musician leads him to the land of the dead is Pixar’s work at its finest. Not only is it a heartwarming story, but it reaffirms the power of family bonds and can be a useful springboard for discussions about death.

Hidden Figures Since we all have cabin fever, we’re looking for movies that will take us far away – and we can’t get further than outer space. Hidden Figures tells the inspiring story of the African American women whose mathematical skills were critical in helping the US win the space race.

Apollo 11 The second film in our space double header is Apollo 11, a documentary feature composed entirely of contemporaneous footage shot by NASA in 1969. It’s a riveting film for anyone interested in space travel.

Timmy Failure: Mistakes Were Made Sometimes we all need to escape from reality. Eleven year old Timmy Failure has created his own world where he works as a detective with the help of an imaginary 1200 pound polar bear named Total. Plenty of laughs for viewers of all ages.

Blinded by the Light With a charming story and an irresistible soundtrack by Bruce Springsteen, Blinded by the Light is the kind of feel-good movie that teens and their parents can both enjoy. Set in 1980s England, the movie features Javed, a young man who wants to leave home and become a writer. But his traditional Pakistani father wants him to become a professional and have an arranged marriage. Love, music, and irresistible performances make this a winning film for everyone.

Glory Road If you’re missing your weekend sports fix, we’re recommending this uplifting basketball story. It tells the story of coach Don Haskins, who signs up African American players for his college basketball team in Texas. Conflict, courage, and great basketball make for a movie that will have sports fans cheering in their seats.

A Beautiful Day in the Neighborhood Parents looking for a heartwarming movie for teens can comfortably watch this film about the influence of Fred Rogers on a jaded reporter. This isn’t a kids’ movie – it deals with some dark issues – but it’s an inspiring story of how one man can be a force for good in the lives of others.

Wondering where to find these movies? Most of the DVDs can be ordered online but if you want to stream them, we recommend using justwatch.com to find out where they are streaming in your jurisdiction. 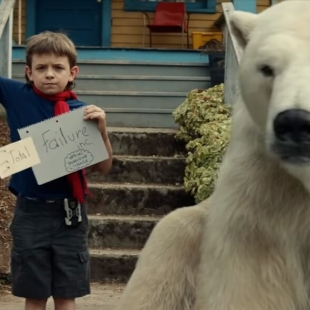 Timmy Failure: Mistakes Were Made

Nobody messes with a detective whose sidekick is a polar bear. Unless he's invisible...