Show Dogs Gets A Needed Makeover

Show Dogs was likely destined to be a forgettable kids flick (according to Forbes, after adjusting for inflation, it had the 7th worst opening ever for a wide release movie). Then it suddenly rocketed up the buzz meter—because parents took aim at its inclusion of a strange, awkward and unnecessary scene which depicts a pooch’s private parts being inspected by a judge.

Amazingly, their alarmed barking got a response.

This week (May 25, 2018) the distributors, Global Road Entertainment, released a statement to Deadline|Hollywood saying they will remove two scenes from the movie and that they take these matters “very seriously”. The statement also includes an apology to “anybody who feels the original version of ‘Show Dogs’ sent an inappropriate message.”

So what was the howling over the film all about?

First is should be pointed out that inspecting a dog from front to back, including a male dog’s testicles, is a real world element of dog shows to ensure the canines are fit for breeding. But the difference here is this depiction takes place in a fantastical, made-for-kids, talking dog movie. Max, voiced by Ludacris, plays a very human role that is somewhat childlike and Frank, his human handler, a police investigator played by Will Arnett, is an authority figure akin to a parent or any other adult who cares for a child.

Increasing the concern is the dialogue that precedes this portrayal. Max is working a case and has been asked to participate in the dog show so they can catch the bad guy. He desperately wants to be an effective police dog and will do whatever it takes to please his handler. When Frank repeatedly tries to practice the delicate genital palpation, the dog Max becomes angry and indicates to Frank that he doesn’t want to do this. Frank insists that Max must allow the judge to do the inspection (in this movie, the dogs understand English) or they will forfeit the ability to participate in the show. So Max takes another dog’s advice and goes to his “happy place” – depicted as a sequence where he and Frank are dancing together and bonding as best friends.

With this perspective, the moment with the judge’s hand reaching between the dog’s legs takes on a very different perspective and sends a powerful, negative, message to kids. Parents (including our writer, Kirsten Hawkes) were quick to notice that if the canine’s role was translated into a human context, the scene would seem to imply children should consent to unwanted touching to please an adult. It also appears to suggests they dissociate from their bodies so they can endure the undesired physical contact.

Along with Parent Previews, many other bloggers, like Terina Maldonado in Arizona, spoke out against the film’s messages. In her blog, Maldonado does exactly what we wish all parents would do when caught in an unexpectedly bad situation. After seeing the movie with her kids, she made the best lemonade she could out of the lemon by using the movie as an opportunity to discuss with her family how children may be groomed by adults to become easy targets for sexual abuse.

We are pleased that Global Road Entertainment has taken this step to alter the film, a rare occurrence for a movie during its initial theatrical release. 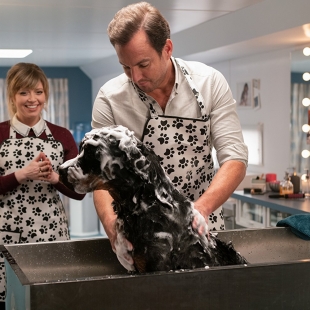